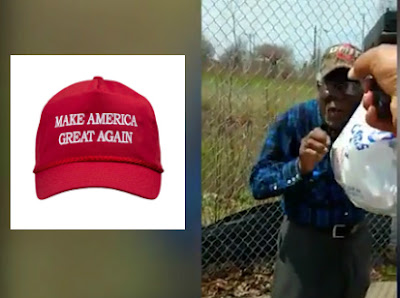 17 April 2017, New York Post: A behavioral health worker randomly killed a Cleveland grandfather and posted video of the execution on Facebook. Police in Ohio urged residents in Pennsylvania, New York, Indiana and Michigan to be on the lookout for Steve Stephens, 37, who may have fled Cleveland after allegedly gunning down Robert Godwin Sr., 74.

Stephens worked for Beech Brook, a behavioral health agency headquartered in Pepper Pike serving children through mental health services, foster care and adoption, at-risk youth programs and other services. An arrest warrant was issued for the suspect, who is wanted on a charge of aggravated murder after posting the shaky video of himself confronting the elderly man — a father of nine and grandfather of 14 — holding a plastic bag.

“Found me somebody I’m going to kill,” he says, chillingly, on Easter Sunday. “I’m going to kill this guy right here. He’s an old old dude, too.” [these are dangerous times for old negro dudes!] He then asks his victim a “favor” by saying his girlfriend’s name, Joy Lane, whom Godwin said he didn’t know. “She’s the reason that this is about to happen to you,” Stephens tells Godwin, who then shields his face with the bag before being shot in the head.

Another Easter Sunday passed over, Americans living their Dream in the midst of the latest Military Media Complex barrage of fear:

All the noise these last weeks about the *threats* over there. . .

The Mother of All Bombs dropped. . .

Ceaseless pointless war and rumors of war. . .here, there, everywhere. . .the reason for which changes so often and so frequently, the real reason is hidden and therefore must be more sinister than mere (ugly) corporatism.

Covered by this fog of fear (which generates near-unanimous consent to kill overseas), however, is the true threat to the nation:

The sickness within, as exampled by the psychotic action of the obese negro Steve Stephens.

With social media live-streaming, who can continue to pretend to see no evil or hear no evil?  Everyday the internets are filled with videos of rapes, assaults and murders.  Who can wade through the live stream of filth and not take notice of the obvious:

America is in a state of derangement.

The degree of violence should appall.  A reasonable people would take action, yet conditioned by the Military Media Complex to only recognize external threats, Americans accept with irrational indifference the threat within.

But it is not merely the number of assaults, rapes and murders in the United States that indicates American derangement (there have been more statistically violent eras in the past).  It is the collective sociopathic belief that violence is the solution to conflict, whether the conflict is internal or external, individual or national.

On the individual level, we observe the obese negro Steve Stephens, apparently internally conflicted by rejection from an obese negress (ironically) named Joy Lane.  Feeling *hurt* by Joy Lane, Steve Stephens self-medicates through violence.  With Joy Lane in his ears and in his eyes, Stephens believes he can repay her by murdering a random old negro, and blaming the murder on Lane's rejection.  There beneath the blue urban skies, Steve Stephens records the murder and broadcasts it on social media, hoping to smother Joy Lane with guilt.  He further alleviates his own pain with his newfound notoriety, and heightens the euphoria by threatening to repeat the action.

Is this learned behavior?  Or the result of his own organic defect?  Who knows?  But Steve Stephens action certainly emulates state action.  The United States feels rejected by Afghanistan, self-medicates by dropping a massive bomb to kill random coloreds, records the murders and displays them through Media, with the President reveling in the notoriety and threatening to repeat the action against other colored states.

In the ever-violent American past, there remained a healthy *peace* remnant who leavened American sociopathy. Peaceful solutions were sought.  There is no *peace movement* in present-day America.  Even in the churches, led by so-called *followers of Christ,* there are only prayers for the military.

It is true the vast majority of Americans would condemn Steve Stephens. . .and of that vast majority, I would wager a vast majority would devil grin through a video of him being riddled with bullets in a po-lice shoot-out, or stand cheering outside prison walls as the state serves him a lethal injection.

Even though the Lord of Creation disavows the violent tactics of the Kingdom of America, Americans now accept as gospel the Satanic doctrine of violence, believing that violence is the solution to every problem, including violence.

Jesus, the perfect reasoned intelligence, reveals the insanity of such thinking when He asks how can Satan cast out Satan?

Only a deranged people would believe it. . .
Posted by Person X at 1:08 AM