More fires and looting in Minneapolis. . .

While Minneapolis burns and unrest begins to spread, the nation's leader wallows in hurt feelings and lashes out in a baby-like tantrum against Twitter!  I would imagine most people are laughing in disbelief at Trump's disconnect from reality.  What I wonder is if the right wing fringe of self-proclaimed Christians who worship Trump as a political messiah feel any shame or embarrassment for him as he acts so petulant?  And do these self-proclaimed Christians truly believe their God blesses such a crybaby?

The police have fled the burning third district in Minneapolis.  OK.  Please.  No more hero worship of these costume wearers.  Please, no more *first responder* nonsense.  When the community needed the police most, the police fled in pure cowardice.  The police have been absolutely useless the last 3 nights.  The police are on duty when there are four of them and one handcuffed drunk. . .but when real service is called for, where are they?  Here's a chance for Americans to have an honest discussion of the value of the kind of *policing* they've been given.  Maybe it's time to go back to having *peace officers* instead of these over-vested militarized petty warrant chasers.  The po-lice as currently constituted provide almost zero return on the heavy tax investment.  Time not for a po-lice *force,* but a community service staff. . .

The people taking part in the civil unrest in Minneapolis Thursday night/Friday morning would best be described as *revelers.*  They are shooting off fireworks, drinking, singing and dancing. . .they are having a gay old time!  Perhaps for the first time, they feel they live an authentic existence, as if they are the masters of their own fate.  While a fair percentage of Americans would watch this scene with disgust, I daresay this is one of the best, most enjoyable nights these revelers have ever experienced.  Fire, destruction, chaos.  All the scene lacks for true Dionysean theatre is mass orgy.  The Minneapolis revelers will remember this night with great fondness for the rest of their lives. 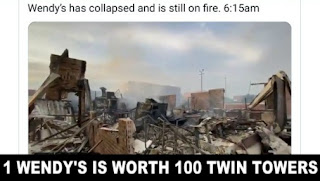 It would be interesting to see what would happen if a group of individuals who engage in anti-po-lice civil unrest intersect with right wing militia LARPers who want their hair cut. . .

Meanwhile the virus molecule is still floating around and millions of American face financial hardship. . .these are challenging days for many Americans as their nation declines further.
Posted by Person X at 12:30 AM