Boston Review, November/December 2009, God, the Army, and PTSD
‘In a 2004 study of approximately 1,400 Vietnam veterans, almost 90 percent Christian, researchers at Yale found that nearly one-third said the war had shaken their faith in God and that their religion no longer provided comfort for them.’

The article linked above says the same trend is now evident in veterans returning from Iraq and Afghanistan. . their ‘faith’ is shaken and their ‘religion’ provides no comfort.

That’s right, THEIR religion CANNOT provide comfort. For THEIR religion is NOT Christianity. These soldiers could NOT have been Christians and participated in these Satanic wars. THEIR religion was CHRISTO-AMERICANISM, which is nothing but a Satanic brew of idolatrous Nationalism flavored with a drop or two of Rick Warren Christianity (read the article for the laughable details).

IN HISTORIC CHRISTIANITY (pre-Constantine) Christians REFUSED to join the military, and those in the military who converted were told NOT TO KILL, to PRAY FOR FORGVINESS FOR PAST ACTS OF VIOLENCE, and to SEEK RELEASE FROM THE MILITARY.

One soldier is quoted in the article:

I couldn’t stand to hear that phrase any longer—‘God was watching over me.’ He wasn’t watching over the good men I knew in Iraq. Faith was the center of my life yet it failed to explain why I came home and those soldiers did not. The phrase was a Christian nicety, a cliché that when put to the test didn’t fit reality.

Sorry, the reality is this soldier was NEVER a Christian. This fellow wanted God to put a shield around him and the other ‘good’ men killing in a Satanic war? This fellow talks about his Christianity not fitting when put to the test. HE TOOK THE WRONG GOD DAMNED TEST.

Then the devil taketh Him up into the holy city, and setteth Him on a pinnacle of the temple, And saith unto Him, If Thou be the Son of God, cast Thyself down: for it is written, He shall give His angels charge concerning Thee: and in their hands they shall bear Thee up, lest at any time Thou dash thy foot against a stone. Jesus said unto him, It is written again, Thou shalt not tempt the Lord thy God.

Anybody not cursed by Satanic stupidity should be able to read the Sermon on the Mount and understand that Christianity has no place for war. IT IS AS SIMPLE AS THAT.

WHAT THE GOD DAMNED HELL? DON’T COME WHINING HOME AFTER VOLUNTEERING TO GO KILL FOR THE FLAG BECAUSE JESUS DIDN’T SPRINKLE MAGIC DUST OVER YOU AND ERASE ALL CONSEQUENCE OF THE ATROCITIES YOU CONTRIBUTED TO. These soldiers used some perverted form of the gospel, some Satanic Christo-Americanism to justify their war, and now they pout when their pervert religion fails them.

Well, God may still deliver the true gospel to some of them, and then they will understand the reality: everything they believed in was wrong, they served Satan, they sinned, and only the Blood of the Lamb can cleanse them.
Posted by Person X at 9:52 AM 2 comments:

The Rabbit Hole Of American Adventurism

How The US Funds The Taliban: In this grotesque carnival, the US military's contractors are forced to pay suspected insurgents to protect American supply routes. It is an accepted fact of the military logistics operation in Afghanistan that the US government funds the very forces American troops are fighting. And it is a deadly irony, because these funds add up to a huge amount of money for the Taliban.

Absurd. Year-after-year this war grinds on. . .no point to it other than the US trying to maintain an *image.* EVERYONE WET THEMSELVES AFTER 9/11 AND LET BUSHCO START A WAR OVER WHAT SHOULD HAVE BEEN A POLICE MATTER. THE TERRORISTS SCATTERED LONG LONG AGO, AND THE GOD DAMNED WAR IS STILL GOING ON, AND NOBODY KNOWS WHAT THE HELL IT IS ALL ABOUT.

Lost in all the War Wonderland illogic are all the dead. Not the US dead. . they are carefully counted and recorded and memorialized and mythologized--how much God damned nonsense was spouted yesterday on the *Veteran's Day?* We are supposed to be thankful *the troops* are killing Afghanis and Iraqis in our name? No, thanks. . .you can stand before God and tell him how proud you were of what the troops did. . .I'll take a pass on that one. No, it is the Afghan dead who are lost. . .swept down the rabbit hole of American Adventurism. The deaths of the others are ignored, not registered, not acknowledged by Americans. Question: does God take note?

Are not five sparrows sold for two farthings, and not one of them is forgotten before God?
Posted by Person X at 9:14 AM 3 comments:

Drag Me To Hell

Drag Me To Hell: Ah, another disappointing Hollywood film. Hyped by the critics as an old-school horror film (meaning, apparently, no torture or nudity) with a generous helping of humor, it is instead a film devoid of thrills and chills, and provokes only a couple of mild chuckles. The story could have been serviceable: an ex-fatty with an inferiority complex angles for a promotion to Assistant Bank Manager, but to prove she has a banker’s *right stuff,* she must turn down a request for a loan extension from a dirty, phlegmy, dentally-challenged one-eyed ancient gypsy woman. The wrinkled, skanky gypsy then curses the ex-fatty, who is tormented for three days by a demon who literally wants to drag her to Hell. The problem is the story is rendered too flat. . .it’s too comic book to produce any genuine fright. The ex-fattie is battered for 3 days by the demon, and never bruises or limps. . .and nobody around her seems particularly alarmed by the bizarre phenomena that afflict her. For example, when her nose bleed turns into a hydrant-like gusher that leaves her bank boss soaked in blood, he seems entirely unconcerned when she returns to work the following day. I guess this shit happens all the time? Sure, supposed horror movies require a suspension of disbelief, but that does not mean they shouldn’t be constructed as believably as possible. Drag Me To Hell’s script is loaded with grossly disturbing supernatural effects, and yet they provoke remarkably little trauma in the characters. I guess one could say this is meant to be more comedy than fright flick, but if so, it is just as much a failure, because the almost slapstick supernatural violence does not mix well with the story. Imagine an episode of the Three Stooges in which instead of only being concerned with getting a good night’s sleep or finding a decent meal, Larry, Curly and Moe were frantically trying to preserve their souls—it wouldn’t quite work, would it?

There is one other major problem with the movie: the terrible performance by the lead actress who plays the ex-fattie. Alison Lohman was cast as a last-minute replacement for Ellen Page. Lohman has absolutely zero charisma, and both her performance and appearance in Drag Me To Hell perfectly define *bland.* She has the looks and talent of a minor character from a television soap opera. Drag may have come off a little better with Page, whose sarcastic skills may have given the movie’s lame humor an edginess more compatible with the comic horror.

The rest of the cast, save for the arresting physical presence of Bojana Novakovic in the small role as the old gypsy’s daughter, is similarly unremarkable. Hollywood curses the movie viewer with another mediocrity. . . 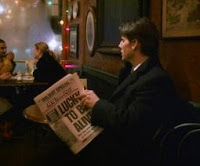 Eyes Wide Shut: Last night I watched this movie for the first time in ten years. I remember admiring at the time it was released director Stanley Kubrick’s artistry in creating a garish dream story (not coincidentally set during the Christian holy-day season) exploring our physical and psychological bondage to the flesh and the flimsiness of our relationships. But I also felt the plot backdrop--the rituals and long reach of human rulers of darkness--was too heavy-handed and left the film, which has moments of wry black humor, feeling less than the sum of its parts, as they say.

Well, the film plays much better ten years later, with the global elites looting the last pennies of the poor, and distracting the sheeple with *terrorism.* Today, watching Eyes Wide Shut’s orgiastic black mass, one can easily imagine Ben Bernanke, Lloyd Blankfein, Timothy Geithner and all the string-pullers of the American Enterprise Institute, the Foreign Policy Initiative and AIPAC behind the demonic masks. 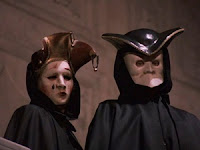 What seemed ten years ago as a very good-but-curiously-flawed last work from the great Kubrick now appears as a fitting capstone to his career, and must be regarded as a creepy masterpiece that was a decade ahead of its time. 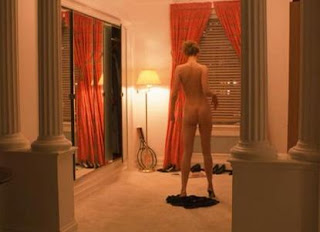 Tom Cruise was effective as the sexually befuddled, successful-but-conventional High Society doctor who gets in a game way over his head. . .and there remains in his performace a painful honesty in the scene in which his character is taunted as a faggot by a gang of drunken frat boys.

Visually dazzling. . .beautifully framed. . .with a great menacing score. . .now, ten years later, I regard this as one of the twenty greatest films of all-time.
Posted by Person X at 12:58 PM 3 comments: