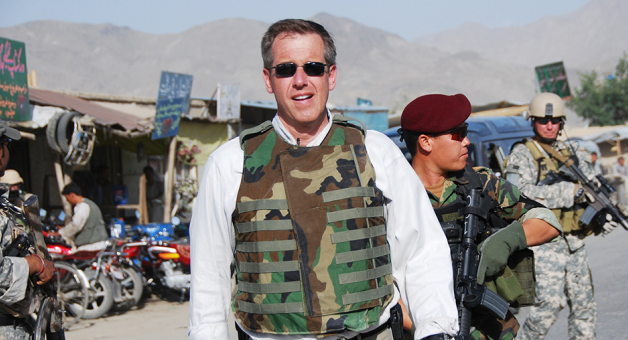 9 February 2015: A vigorous debate over Brian Williams' future is brewing as "NBC Nightly News" aired Monday without the decade-long anchor.

Some critics suggest that Williams, who apologized last week for falsely claiming that he was in a helicopter that had been hit by a grenade while in Iraq in 2003, should be fired. Others wonder if commerce will win out, since Williams has kept "Nightly News" at the top of the ratings while much of his news division crumbled around him. How much are the years of good work worth?
"This is one of the toughest calls that I've ever seen," said Paul Levinson, professor of communications and media studies at Fordham University. "On the one hand, the public is right to expect nothing but the truth from our reporters and our news anchors."
Uh. . .ok. . .so. . .help me understand this, please.
The war. . .that war of which Brian Williams told some *fish stories* about himself. . .that Iraq war that started in 2003. . .uh, that war that was born in lies. . .now we are supposed to be having a *vigorous debate* about some Talking Head's fish stories from that war?  Lying about a lie?
America never has had, and never will have, a *vigorous debate* about her post-*9/11* wars.  War after war, endless drone murders, colored nations torn apart and left for the crows of the Islamic State to feed on, and Americans bury their heads in the sand.
All right. . .in the last few days there have countless articles on the Williams' fish stories, most spouting platitudes similar to the one from the story above:
The public is right to expect nothing but the truth from our reporters and our news anchors. . .
But not from our Presidents, apparently, as American Media, post-*9/11,* has consistently supported government war propaganda. . .even when the government itself has confessed its sins!

The Bush Administration repeatedly presented intelligence as fact when in reality it was unsubstantiated, contradicted or even non-existent.
Media reported BushCo's war lies as truth and disgraced itself as Shock and Awe cheerleaders, yet when the lies were exposed (uh, weapons of mass destruction, anyone?), Media just went on to the next war, reported uncritically the next wave of war propaganda.

So let me get this straight:

BRIAN WILLIAMS SHOULD FEEL NO SHAME FOR BEING A BUSH WAR PROPAGANDIST AND  *EMBEDDED* WAR WHORE, IT'S BEEN JUSTIFIABLE FOR HIM TO BECOME RICH AND REVERED FOR NEVER QUESTIONING WHITE HOUSE WAR PROPAGANDA, BUT NOW BECAUSE HE TOLD A FEW FISH STORIES ABOUT HIS CONDUCT IN A WAR HE HELPED SELL TO AMERICA, HE SHOULD BE ASHAMED?  BRIAN WILLIAMS IS PROBABLY SCRATCHING HIS EMPTY FUCKING HEAD RIGHT NOW: IT WAS OK FOR ME TO LIE AMERICA INTO A WAR, BUT NOT OK TO HELP MYSELF TO A COUPLE CORPORAL'S STRIPES?

Are you fucking kidding me?  Bitching about Brian Williams taking some spoils of war for his part in promoting BushCo's war propaganda?  Talk about straining a gnat and swallowing a camel.

War after war, endless drone murders, colored nations torn apart and left for the crows of the Islamic State to feed on, and Media refuses to have an adversarial relation to government war propagandandists--THIS OUGHT TO BE THE GOD DAMNED STORY. . .not Brian Williams' fish stories.

Brian Williams, and the rest of the Corporate Media, need to explain why they never met a war they didn't bend over for. . .

Brian Williams, and the rest of the Corporate Media, have been promoting war faithfully and uncritically for nearly two decades.  The same despicable *journalism* is practiced even now.  Brian Williams and Corporate Media faithfully and uncritically *report* the government's current war propaganda, the crude lies about the Ukraine, meant to prepare the American Sheeple for a conflict with Russia.

[very good article HERE showcasing America Media serving as mouthpiece for government propaganda on the situation in the Ukraine]
Year after year after year Brian Williams was a government war whore, and nobody ever questioned his credibility. . .

Fuck Brian Williams, I have no sympathy for him. . .he's enjoyed his riches, his fame, and he'll continue to enjoy the Good Life. . .but what a God Damned corrupt culture, when Brian Williams is NOT brought low for selling war, but for taking a shit in it.
Posted by Person X at 12:18 AM No comments: