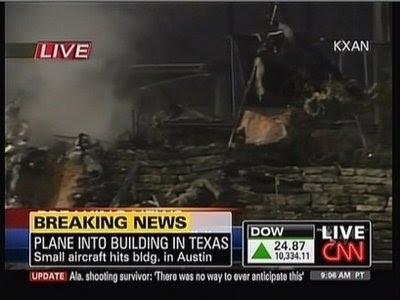 AP, 19 February 2010: A software engineer with an apparent grudge against the government crashed his small plane into an office building with nearly 200 Internal Revenue Service employees inside, killing himself and at least one worker. Before flying his single engine Piper PA-28 into the hulking black-glass office building Thursday morning, A. Joseph Stack III apparently posted a rambling screed on a Web site in which he railed against "big brother," the "unthinkable atrocities" committed by big business and the governments bailouts that followed. In the note, signed "Joe Stack (1956-2010)" and dated Thursday, he said he slowly came to the conclusion that "violence not only is the answer, it is the only answer." In the self-described "rant," the author fumed about the IRS and wrote, "Nothing changes unless there is a body count." "I have had all I can stand," he wrote, adding: "I choose not to keep looking over my shoulder at `big brother' while he strips my carcass."

My first reaction to events of this kind is always amazement we don’t have more.

In a nation populated overwhelmingly with pseudo-Christian baptized materialists, sheeple devoted solely to the pursuit of treasure on earth, I live in expectation of a great wave of *domestic terrorism,* as the sheeple’s credit wealth evaporates in the wake of America’s economic collapse.

But then, considering the craft of the Military Media Complex, my amazement ceases, as I watch the story of the *lone nut* replaced by coverage of more important news events, such as the *apology* of the perpetually erect Tiger Woods, or the latest crash of a female skier at the Olympics, or the most recent weep-fest from a dismissed American Idol wannabe.@@@

I must concede the American masses remain hypnotized by the *broadcast reality* created by the Media wing of the Military Media Complex. Much like terminal cancer patients die in a medicated state of unfeeling, the sheeple die painlessly, over-dosed on the gross *entertainments* of their televisions and other assorted electronic gadgets.

Poorly and shallowly educated, raised on the brain sugar of the boob tube, the American is unaware he/she is the product of mass manipulation.

Still, one wonders how long the electronic opium can continue to placate the sheeple. We are still only in the very earliest stage of America’s economic ruin. Perhaps a day will come when the new reality of poverty breaks down the electronic barrier of the *broadcast reality,* and more and more sheeple will make the same discovery as Joe Stack:

It made me realize for the first time that I live in a country with an ideology that is based on a total and complete lie. It also made me realize, not only how naive I had been, but also the incredible stupidity of the American public; that they buy, hook, line, and sinker, the crap about their 'freedom' … and that they continue to do so with eyes closed in the face of overwhelming evidence and all that keeps happening in front of them.

@@@Unlike the story of the famous Detroit airport *underwear bomber,* who only managed to singe his own pubic hairs. Yet that *terrorist’s* story was *big news* for days, as it served the Military Media Complex’ interests to keep the sheeple frightened their *broadcast reality* might be threatened by the other. . .and that fear, of course, keeps the *defense* budget sacrosanct. But we can’t have the sheeple fretting over *domestic terrorists*--that truly hits a little too close to home, and threatens to break the electronic trance which molds the sheeple.