Feast of the Super Bowl 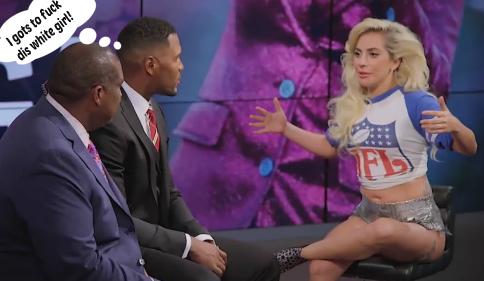 The angel poured his super bowl over the beast's throne, and darkness covered its kingdom. . .

America's most sacred feast day is upon us:

When the whole country joins together in front of the television altar and partakes in the nationwide communion of the fanatics, eating the pizza, wing and nacho hosts, while drinking the lite beer, tequila and soda sacramental blood of its gods of pleasure, Sport and Entertainment.

This year's High Priestess will be the American greaseball Stefani Joanne Angelina Germanotta, who practices her stagecraft under the name *Lady Gaga.*

Lady Gaga will perform the halftime mass, in which she will call the intoxicated congregation of couch potatoes to give their hearts to her, Vicarius Corruptionem.

The football match itself, this time pitting the Atlanta Falcons against the New England Patriots, is usually a mere afterthought to the All Day celebration of the decadent culture, which manifests in a stupefying, ugly marathon of commercials, a helter-skelter of advertisements for the worst of the material world.  These 30 to 60 second spells are crude mish-mashes of the basest lusts attached to the garbage products and services of the age. . .crass CGI voodoo: automobiles, candy bars, US armed forces, electronica, the junk of our conspicuous consumption stuffed with locks of pubic hair and coated with a thin layer of pixelated endorphins.

Beside the gluttony, intoxication, carnal knowledge and circus game, the Feast of the Super Bowl also invites the ancient art of cleromancy, the casting of lots, remade under its modern embodiment: gambling.  Vast sums are wagered by the communicants, confident in their divining of the will of their gods.  Following is a list of the more popular divinations, along with my own humble forecasts:

Will Lady Gaga exalt herself above the throne of the President, and curse the name of Trump? Yes.

Will Lady Gaga prove her exaltation with a sign of the miraculous, by vomiting or urinating rose petals? No.

Will Lady Gaga mark her exaltation with the sign of a *wardrobe failure,* by baring her breasts or cunt? Yes.

Will any flying object strike country crooner Luke Bryan while he sings the National Anthem? No.

Will any players refuse to stand for the National Anthem? No.

Will the first points in the game be scored by a white player or a black player?  White.

Atlanta +3 vs New England: Beside the obvious reason for picking the Patriots (Brady proven SB hero, Ryan still doubtful hero), I find one distinct advantage for NE: their defense improved significantly in the second half of the season, yards per game went down from 354 (252 pass, 102 rush) to 299 (223 pass, 76 rush), while Atlanta's defense remained below average, allowing 363 yards (248 pass, 115 rush) per game in second half of the season.  The Patriots will be able to slow down Atlanta's offense, and probably frustrate Matt Ryan into a couple turnovers, particularly in the red zone, where he still has a tendency to panic (displayed even in the rout over Green Bay, where he threw at least one DUMB red zone ball that should have been intercepted).  Because of the clear advantage at QB and on defense, we must pick the Patriots, even though the Falcons probably have an over-all talent edge (the Patriots have nobody the equal of Julio Jones or #44).  Should be a fairly entertaining game, Atlanta should hang in all the way, as New England's white boy offense lacks the explosiveness to blow away the Falcons.  New England wins, and covers, barely.  New England 27, Atlanta 23.
Posted by Person X at 9:44 PM 8 comments: