Robert Ryan, always one of Hollywood’s best at playing violent misfits, seethes as Jim Wilson, a big city cop slowly being suicided by the job. After years of performing the thankless and soul-crushing task of collecting the city’s human garbage, Wilson’s skin is worn dangerously thin, and he rages at the slightest provocation.

Like Taxi Driver’s Travis Bickle twenty-five years later, Jim Wilson is sickened by the depravity of the city, and lives an isolated existence. Whereas Bickle sought release for his sexual frustration in pornographic theaters, Wilson appears to indulge in kinky sex with gutter girls, judging from one classic scene in which he appears to oblige a masochistic girlfriend of a gangster he is chasing. (In another similarity to Taxi Driver, On Dangerous Ground briefly sports an underage prostitute, played by Nita Talbot and looking like a jailbait cross between Gloria Grahame and Lauren Bacall).

As Wilson’s temper spirals out of control, his police captain sends him out of the city for a cure. Wilson is sent upstate to help the yokels track down a teen girl’s killer. The bleak snow-covered landscape is a kind of Magic Mountain for Wilson—he can breathe in the clean cold air, after years of choking on the city’s sewer fumes. Wilson is finally able to let his guard down a bit, and actually seems less trigger happy than the local vigilantes (though when one of the hicks gets a close-up look at the face of death, his innocence bewilders the calloused Wilson).

In Taxi Driver, Travis Bickle believes his ministering angel is Cybill Shepherd’s Betsy, and he becomes obsessed with her. On Dangerous Ground’s Jim Wilson has a fixation with Mary, the blind sister of the teen girl’s killer. Mary is not nearly the worldly princess of Taxi Driver’s Betsy. Mary lives nearly as isolated an existence as Wilson, having sacrificed her own happiness to look after her disturbed brother. Quirkily played by Ida Lupino, Mary is frail and sad, and also a bit of a dreamer. . .she’s kind of a northern woods version of one of Tennessee Williams’ southern gothic girls.

Wilson and Mary, recognizing the desperate loneliness in each other, communicate in fits and starts, never quite fully connecting. Had On Dangerous Ground ended one scene earlier, with a teary-eyed Jim Wilson driving alone back through the dark and ugly city streets, instead of turning back for a tacked-on and phony happy ending in Mary’s arms, this would have been one of Film Noir’s greatest entries, a character study of two emotional exiles, doomed by their contrasting environments. The Smiley Face ending scars an otherwise powerful portrait of alienation. 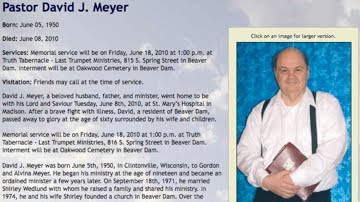 Received today news of the death of David Meyer, age 60.

Few knew of him. And of those who did, most laughed at the Christian *nut.*

Knowing this first, that there shall come in the last days scoffers, walking after their own lusts, And saying, Where is the promise of His coming?

Meyer published a newsletter: *Last Trumpet.* Sent it out faithfully every month for the last twenty-nine years. He’d sift through the news and pick out the stories he believed heralded the nearness of the *End Times.*

I didn’t agree with all of Meyer’s theology. For example, if trouble hit New Orleans, it was usually because the city sponsored a Faggot’s Day parade. Well, if that were the case, why weren’t San Francisco and New York and some of the other premier faggot enclaves similarly troubled? Such doctrine fails to square with our Lord’s teaching (Luke 13:1 – 5).

Meyer, as he dutifully informed his readers every month, was *saved out of the occult,* and hence he had an eye for the witchy shadows creeping across America. The sheeple see only the lying vanities of the world, while Meyer had a pretty good eye for the unseen *rulers of the darkness of this world.* That was his trademark, so to speak, reading the events of the day as the signs of the *End Times.*

Unlike the vast majority of red, white and blue Christians, Meyer understood America was under a Satanic spell, and that the majority of those Americans who call themselves Christian are either hereticks or apostates, and the American *church* is a spiritual weakling composed of shameless materialists, sensation seekers, Jesus compromisers, and spineless pew-warmers who buckle under the small weight of their daily cross, and pout over their imaginary persecutions.

In the June or July 2001 issue of *Last Trumpet,* Meyer related a vision he received while on a trip to New York. He saw Manhattan choked with flames and smoke. The vision would turn out to be eerily similar to the famous events of *9/11.*

Meyer’s time on this side is over, and I would imagine he is now with our Lord and Savior. He devoted nearly half his life to a newsletter warning the *End* was near, and sinners should repent and receive the gospel of Jesus before that Door was shut.

Strive to enter in at the strait gate: for many, I say unto you, will seek to enter in, and shall not be able. When once the master of the house is risen up, and hath shut to the door, and ye begin to stand without, and to knock at the door, saying, Lord, Lord, open unto us; and he shall answer and say unto you, I know you not whence ye are. . .

I wonder what it is like, over on Meyer’s side, out of the Big Lie, secure in Eternal Truth? His labor done, his soul rescued from this burning rubbish heap of time, the Adversary must not seem quite so alarming.

Satan will continue gathering the world until the Last Day. With Meyer gone, there is one less faither standing in his way. And that is how the *End Times* clock truly ticks down—one faither at a time, until there are so few left, our Lord, looking forward to that Day, could well ask:

Nevertheless when the Son of man cometh, shall He find faith on the earth?