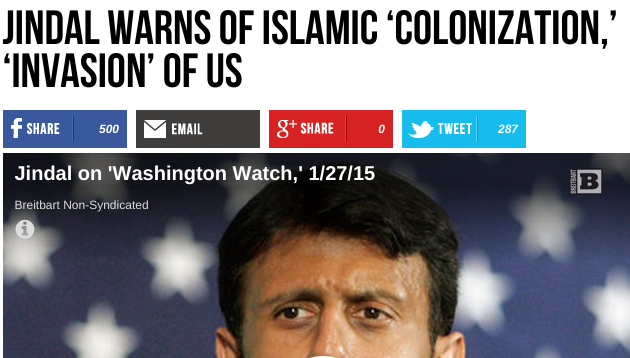 27 January 2015: On Tuesday’s broadcast of the Family Research Council’s “Washington Watch,” host Tony Perkins asked guest Gov. Bobby Jindal (R-LA) about Muslims and the threat of radical Islam.  “One of the great things about America is it doesn’t matter if you’ve been here five minutes or a hundred years, we have folks that come here, want to be Americans,” Jindal said. “They join our military, they start companies, they work to create a better community. And that’s wonderful. What’s not acceptable is people that want to come and conquer us. That’s not immigration, by the way, that’s colonization. If someone wants to come here and change our fundamental culture and our values. If they want to come here and they want to set up their own culture and values that’s not immigration, that’s really invasion — if you’re honest about it. This is a particular threat we face.  And if we’re not serious about this we’re going to see more lone wolf actors. We’re going to see more folks come into our country just like you’ve seen in other countries — the horrific shootings in Paris.”

You know America has gone totally *American Sniper* when even the shitskins start demonizing the others!

Unable to reconcile her failures in the *Middle East* with her grandiose manifest destiny, America becomes even uglier and more sanctimonious. . .
Posted by Person X at 10:42 PM No comments:

A Clash Of Freedoms In Gay Paris! 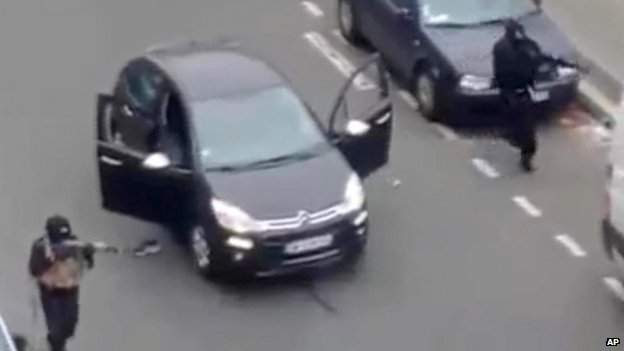 Daily Mail, 7 January 2015: Twelve people were killed today when gunmen carried out a massacre at the offices of a notoriously anti-Islamist newspaper in Paris - including a police officer who was executed as he begged for mercy on the pavement. Masked attackers brandishing Kalashnikovs burst into the Charlie Hebdo headquarters, opening fire on staff after seeking out journalists by name. Clad all in black with hoods and speaking flawless French, the militants forced one of the cartoonists - who was at the office with her young daughter - to open the door. Witnesses said the suspected Al Qaeda gunmen were heard to shout 'the Prophet has been avenged' and 'Allahu akbar!' – Arabic for 'God is great' – as they stalked the building. They headed straight for the paper's editor and cartoonist, Stephane Charbonnier, killing him and his police bodyguard, who is believed to have been recruited to protect him following earlier threats. They also killed three other renowned cartoonists – men who had regularly satirised Islam and the Prophet Mohammed – and the newspaper's deputy chief editor. Horrific footage emerged showing an injured police officer slumped on the pavement as two of the gunmen approached him outside the office minutes later. In an apparent desperate plea for his life, the officer is seen slowly raising his hand towards one of the attackers, who responds by callously shooting him in the head at point-blank range. Despite a shoot-out with armed officers, the 'calm and highly disciplined' men were able to escape in a hijacked car and remain on the loose.

The rather breathy article goes on to state:

President Francois Hollande described the bloodbath as a 'barbaric attack against France and against journalists' and vowed blah blah blah. . .

After the shooting, hundreds of comments were posted on the Charlie Hebdo Twitter page, with one user, David Rault, writing: 'A sad day for freedom blah blah blah. . .

Though I did find President Barack Obama's remarks strangely untoward when he was asked to comment on the *senseless tragedy:*

President Obama says he would be "pretty aggravated" if he were a Detroit Lions fan after the team lost an NFL playoff game to the Dallas Cowboys following a disputed penalty call. . .Obama said he watched the game and that he couldn't "remember a circumstance in which a good call by one of the refs is argued about by an opposing player of the other team with his helmet off on the field, which in and of itself is supposed to be a penalty. The call is announced and then reversed without explanation. I haven't seen that before. So I will leave it up to the experts to make the judgment as to why that happened, but I can tell you, if I was a Lions fan, I'd be pretty aggravated."

Uh, perhaps the President got his senseless tragedies mixed up?

But anyway, something buried deep inside the otherwise hoary *terror* story did catch my eye:

Mr Biard said he did not believe the attack was linked to the newspaper's latest front page, which featured novelist Michel Houellebecq, who has previously sparked controversy with comments about Islam.

Thankfully Houellebecq is unharmed, and will be able to continue his rather uneven literary career:

Whatever: A thin Bret Easton Ellis knockoff in which the disaffected wanker hero's drug of choice is nicotine, not cocaine.

The Elementary Particles: A major step forward, a history of Western decay since the 1960s, told through the broken lives of Narcissus-and-Goldmundesque half-brothers.

The Possibility Of An Island: Houellebecq bottoms out with this silly sci-fi apocalypse, loosely based on the Raelian cult.

The Map And The Territory: A return to greatness. . .vintage Houellebecqian cranky discourses on art, consumerism, existence, alienation, death, houseflies. And in a masterpiece of self-parody, Houellebecq himself appears as a character in this, his finest novel.

You have white Westerners who believe they have advanced beyond menial labor and who lured darkies to their Utopia to clean their restrooms, pick up their garbage and do their laundry, crying today in Gay Paris! because hot-headed elements of their darky lower class got tired of scrubbing godless Western toilets and then, while riding the Metro green line to their slums, had to read condescending cartoons about their beliefs inked by the master class *exercising* one of its precious *freedoms.*  Well, today two or three of the islamic underclass decided to exercise one of their precious freedoms, the freedom their religion gives them to kill the infidels. . .ha ha ha!

What we had today in Gay Paris! was a clash of freedoms. . .nothing more, nothing less.

*Freedom!*  The great scam of the rich!  The ultimate something-for-nothing swindle.  While picking the pockets of the poor, the rich distribute a few dirty magazines and stage a meaningless vote, and then lecture the poor on how privileged they are to be *free,* while laughing all the way to the bank:

That's right. . .the richest 85 people in the world own more wealth than the bottom half of the entire global population.

Unfortunately, the only *Freedom* most Westerners have is the freedom to be in bondage to vulgarity.  Real freedom, the ability to direct the course of one's own life, is beyond the overwhelming majority of Westerners, white or colored, who are under control of the Great Master, The Bank.

And now another round of Western huffing and puffing on the House of Terror. . .

The real lesson on *Freedom* from Gay Paris! will go unlearned.  And it goes above and beyond earthly inequality.  Even the Great are not Free.  They profit. . .but only in the here and now.

When you watch mankind divided and at war, you see an enslaved creation, subject to the higher powers.

For we wrestle not against flesh and blood, but against principalities, against powers, against the rulers of the darkness of this world, against spiritual wickedness in high places.

But neither side in the sorcerer's *war on terror* will be able to see through the lying vanities of the world, and all things continue as they were from the fall of creation. . .
Posted by Person X at 12:02 AM No comments: