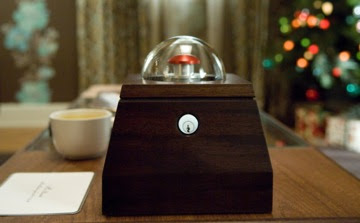 Gimpy Norma and hubby Arthur are a fairly successful 1976 prototype yuppie couple. Norma teaches English at a fancy Virginia prep school, and Arthur is a NASA scientist who helped design the camera for the Viking Mars probe (Mars and the Viking mission are important to the movie’s plot—somehow.). They live a little above their means, and though not in desperate financial straits, money is a little tight. One chilly Christmastime morn, as they sleep peacefully in bed (better is little with the fear of the LORD than great treasure and trouble therewith), Norma is awakened by the ringing of their doorbell. She groggily goes to answer, looks through the peephole and sees a black limo drive off. Opening the door, she discovers a package on the step. At breakfast with Arthur and their eleven-year-old son, Norma opens the package and finds a pyramid-shaped box capped with a red button, along with a note stating that a Mr. Steward will come to their house at 5 pm.

It turns out to be a rather rough day for both Norma and Arthur. Norma is viciously teased about her gimpy foot by one of her (weird) students, and then is informed by the principal the school can no longer provide a discount for her son’s tuition. Meanwhile, Arthur goes to work at NASA, and receives the news that he has been rejected for the astronaut program (his life’s dream) because he failed the psychological exam.

Back at home, a depressed Norma mopes about, and then as the clock strikes five, Mr. Steward arrives. This Steward, who will turn out to be quite a mysterious figure, indeed, has a mug one will not soon easily forget, as a good portion of the left side of his face is gone, marked off by a large and gruesome burn scar. After recovering from the sight of Steward’s unsettling visage, Norma lets him in, whereupon he explains the meaning of the box:

If you push the button, two things will happen. First, someone, somewhere in the world, whom you don't know, will die. Second, you will receive a payment of one million dollars. You have 24 hours.

Naturally, Norma and Arthur debate the pros and cons—though Arthur is skeptical about both the money and the death, believing the situation will turn out to be nothing more than an elaborate prank. Norma thinks the money will make their life better, and is therefore more inclined to have *faith* in the box (for where your treasure is, there will your heart be also). Arthur is then prompted to ask if Norma really thinks they need money to be happy (for what is a man profited, if he shall gain the whole world, and lose his own soul?).

As the deadline approaches, Norma yields to temptation and pushes the button (and the LORD God said unto the woman, What is this that thou hast done? And the woman said, The serpent beguiled me). Steward once again appears right on time, delivering the million dollars and taking back the box. Before he leaves, however, he issues a cryptic comment that may imply Norma or Arthur will be the box’s next victim. Immediately, Norma and Arthur regret Norma’s decision, and Arthur tries to return the money (then Judas, which had betrayed Him, when he saw that He was condemned, repented himself, and brought again the thirty pieces of silver to the chief priests and elders), but, alas, too late! The deal is done. . .

Certainly one could say of the plot to this point it requires a fair degree of credulity. And yet these opening scenes are as close as The Box gets to *realism,* as the eccentric script takes one increasingly bizarre turn after another. As Norma and Arthur try to unravel the mystery of Steward and the box, the viewer learns the following:

Steward also worked for NASA on the Viking Mars mission, and while on duty, he was killed when struck by lightning (I beheld Satan as lightning fall from heaven), but, in a rather sinister miracle, he returns from the dead, though with a good portion of his face burned away (and I saw one of his heads as it were wounded to death; and his deadly wound was healed: and all the world wondered after the beast).

Steward now works as a glorified errand boy/messenger for those who brought him back to life, and whom he enigmatically terms his *employers.*

Steward’s *employers* may be from another dimension. . .or from Mars. . .or from Hell. There are clues, I suppose, as to the precise identity of the *employers,* and these clues might seem more obvious upon closer or repeated viewings of The Box, but, to me, IDing the *employers* didn’t seem particularly germane to the spirit of this curious movie.

There are many other lesser *employees* of the *employers,* and, seeming to accord to the degree to which they have become indoctrinated into whatever the *employers* *mission statement* is, they exhibit symptoms ranging from nose bleeds (when they step out of line) to total mind control.

I must also mention the feel-good subplot involving Arthur’s attempt to construct a prosthetic foot for gimpy Norma (and if thy foot offend thee, cut it off: it is better for thee to enter halt into life, than having two feet to be cast into hell, into the fire that never shall be quenched).

Indeed, The Box is thoroughly implausible. . .and yet it is, without doubt, the most realistic American movie of recent memory. No film has better captured the chilling spirit of beguiled America. It depicts Americans undergoing trance-formation, the victims of an unknown power (for we wrestle not against flesh and blood, but against principalities, against powers, against the rulers of the darkness of this world, against spiritual wickedness in high places).

The Box offers an artfully crafted surreal mix of SciFi, horror and metaphysics, yet at heart it presents a simple parable of a people who condone the killing of nameless, faceless others in exchange for material comfort. The Box, quite simply, renders the *American Dream* as gnostic nightmare.

As one observes America choked with ‘Who Would Jesus Bomb?’ patriots willing to push America’s red war button, one must conclude The Box presents America exactly as it is:

PS: The Box’s vision isn’t totally bleak, as the movie’s Sophie’s Choice-esque conclusion offers hope for redemption (but, unfortunately, The Box’s soteriology finds no parallel to the gospel).