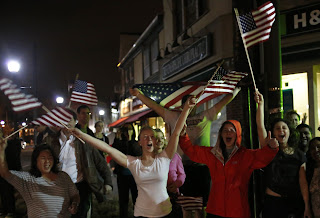 When life has no meaning, it's good to be an AmerICKan!


I think I'd feel a little silly whooping it up in the streets after obeying Big Government's order to hide under my bed all day. . .

An entire city peeks from behind the curtains for a whole day over one teenager hiding in a boat, then they bust out the flags and dance in the streets like it's VE Day. . .ha ha ha.

Assorted crackpots all over the world undoubtedly took note how little it now takes to terrorize AmerICKa and bring a major metropolitan area to a complete standstill. . .so who really *won?*
Posted by Person X at 3:13 AM 6 comments: 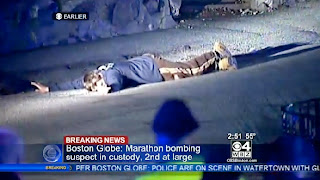 The end of the line for one sand nigger, forced to strip and taken away naked. . .you know that has to hurt his pride. . .dragged off by nude by the enemy.

No doubt after the last picture released these two jokers are A-rabs. . .look at those Joe Camel noses: 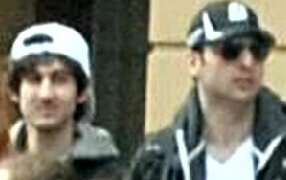 Nobody has to feel bad now about the other sand niggers who were falsely accused. . .they’re guilty by association.  AmerICKa can now resume her favorite pastime: congratulating herself.  We'll hear all manner of law enforcement, politicians and other assorted blow hards extolling the resilience, fortitude, bravery and God blessedness of the republic. . .

UPDATE: 4:15 am. . .ha. . .now we are getting what are called *conflicting reports*. . .supposedly one of the bombers is dead. . .so the fellow lying on the ground in the photo above, and who was taken away NAKED in a squad car, must not be a bomber. . .one sand nigger dead, one on the loose. . .and one random NAKED guy hauled off. . .all these conflicting reports will be meat-and-potatoes for the Alex Jones crowd.

Good question.  My understanding is that Chechens are the muslim niggers of Russia. . .a weird mud people formed out of the slums of the North Caucasus, a mix of Georgian, Azeri, Turk, Persian and assorted other European and Middle Eastern stragglers who stopped by to fornicate while crossing the Caucasus.

So in short, there is something in them for everybody to hate!

UPDATE: 12:30 pm. . .apparently the dead bomber stated he didn't understand AmerICKans, but in his embrace of violence, he showed a shared affinity. . .AmerICKans have always resorted to violence to solve their problems. . .after all, that's what the Bostonians cherished *Partriots' Day* celebrates. . .no one should be shocked at the rockets red glare and the bombs bursting in air on Patriots Day. . .there is nothing more AmerICKan than the smell of gunpowder in the morning. Ha ha ha. . .AmerICKa is supposedly this very PC country. . .you can’t even call fat people fat anymore. . .but there is one group of *people* you can accuse at will:

Going to the court right now!! Shit is real. But u will see guys I did not do anything.

Well, Salah, it probably doesn’t even matter. . .look at the example of John Doe #2, Abdulrahman Ali Alharbi, the first sand nigger to be falsely accused (the evidence of his guilt: he ran injured from the bomb blast seeking medical help—this *suspicious* behavior enough to convince Southie rednecks the sand nigger must be the bomber, whereupon they roughed up the injured raghead and turned him over to the police). . .and so just a day or two after being cleared of the bombing, our John Doe #2, Abdulrahman Ali Alharbi, continues to have the shadow guilt hanging over him, as right wing Media whites such as Sean Hannity, who claims not to be a conspiracy nut, still promote the view Alharbi is a terrorist, and even suggest Obama had a secret meeting with a Saudi prince to arrange for the quiet deportation of the nefarious sand nigger of the nefarious sand nigger (story here).

Who Is My Neighbor? In Boston, It Ain't Abdulrahman Ali Alharbi 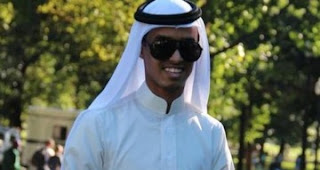 Bostonians are falling all over congratulating themselves for their kindness and charity exhibited during the Marathon bombing. . .as one news story framed it:

Out of the horror of the Boston Marathon bombings, there emerged uplifting examples of human kindness as the city's residents did all they could to help those caught up in the attack.

Well. . .er. . .there's one colored boy (our Marathon John Doe #2 from yesterday's post) lying in a Boston hospital who might be wondering where his Good Samaritan was.  Abdulrahman Ali Alharbi,  a 20 year old student at the New England School of English, was injured during the attack. As he fled the scene, looking for medical help, he was roughed up by a group of Boston Good Samaritans and then turned over to law enforcement officials, after being falsely accused of involvement in the bombings.  Now, I am sure there are plenty of (white) folks who can tell heart-warming tales of generosity, but to fit the pattern of the Good Samaritan parable, the act of kindness must be directed to the other.  White AmerICKan-on-white AmerICKan love don't fill the bill. . .nor does this:

Sources told FOX 25 there was an American Airlines flight that was headed to Chicago. There were two men on that plane – not sitting next to each other – and speaking Arabic. There were some concerned marathoners on the flight so the plane was brought back to the gate and the two men were escorted off the plane. No other details were immediately available.

Authorities say they are searching for a darker skinned or black male with a black backpack and black sweatshirt, possibly foreign national from the accent of the individual. Five minutes before the first explosion, officials said this person attempted to gain entry to a restricted area. When turned away, he broke eye contact and pulled his sweatshirt hood over his head and left, officials said.

How easy it is to find the scapegoat. . .just look for the black sheep.
Posted by Person X at 8:59 PM 1 comment: 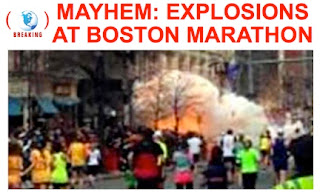 Given that it is tax day and that the attack took place in tea-town Boston on Patriots' Day, we must suppose the Marathon bomber is of domestic origin, an anglo-saxon *patriot* protesting any of a number of the sins of the colored socialist Obama.

UPDATE: 9:30 pm: CBS News senior correspondent John Miller reports that a Saudi national is being questioned by authorities. He was seen "acting suspiciously" running from the explosion, and a civilian chased him down and tackled him. He was turned over to Boston police and is being questioned by the FBI. He is being cooperative and denies any involvement.  "This could mean a lot, or this could mean very little," Miller said. "It's too soon to call him a suspect."


Ha ha ha. . .how predictable, that a sand nigger is suspected!  Even funnier is that running from an explosion is considered *acting suspiciously!*  This poor sand nigger had nothing to do with the attack. . .given the timing of the blasts, the bombs had to be detonated by remote, so why would the bomber be running around at the scene?  Whoever set off the bombs would have done so far from harm's way. . .no, this poor sand nigger just happened to cross paths with some drunken Southie redneck, and now he'll have to spend hours and hours telling an assortment of cops, Feds and Homeland Security types how much he loves AmerICKa. . .and years from now, this *suspicious* towel head will be the John Doe #2 of Boston, the *Middle Eastern connection* right wing whites will use to prove that the bomber produced by the government, a white *patriot,* was really just a patsy for nasty muslim darkies.
Posted by Person X at 4:13 PM No comments: