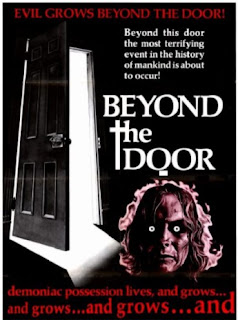 It’s safe to say Juliet Mills, who played the wholesome limey nanny of the 1970 ABC sitcom Nanny And The Professor, never kissed any of her three adolescent charges in that show the way she kisses her character Jessica’s son in Beyond The Door:
Beyond The Door is a 1975 Italian horror movie. . .so, yeah, it looks and sounds cheap, has the type of *huh?* script that invites the viewer to question it in nearly every scene (example: Jessica, her husband and two pre-teen children live in a posh San Francisco apartment, and the Satanic attack they endure provokes such NOISE, furniture and other objects crashing around in rooms shaking with earthquake force, ear-splitting demonic laughter, children wailing, husband and wife screaming. . .but none of the neighbors ever bother to step out into the hallway to see what the fuck is going on in the madhouse that has become apartment 1508, or to ask them if they could tell Satan to please keep it down a little, people are trying to sleep and have to go to work in the morning!), poorly dubbed and poorly culturally translated (example: the greaseballs who made this flick try to capture ‘70s SanFran Americana by having Jessica’s 10 year old daughter speak in an absurdly foul-mouthed Manson-girl hippie-ese).
The film is an obvious rip-off of both Rosemary’s Baby and The Exorcist, the convoluted plot as follows: Jessica is taken to a Satanic ceremony where she watches a nude girl writhe on an altar while listening to the whispers of the mysterious Dimitri, who we later learn has sold his soul to Satan. Jessica, sadly for the audience, runs away before being raped. Years later Jessica is living happily in San Francisco with her milquetoast husband and two brat kids when she learns she is pregnant. The pregnancy proceeds at hyper-speed with hyper-pain, which alarms Jessica’s doctor. . .but, not so much. Anyway, the baby, surprise!, is Satan’s, and Satan tells Dimitri if he goes to Frisco and makes sure the baby is born, he will extend his life. Why would powerful Satan need Dimitri’s help? It turns out he don’t, he just wants to fuck with Dimitri one last time before taking his soul.  Hey, Satan wants to have a few kicks, too!  Meanwhile, Jessica suffers all sorts of Linda Blair-type indignities while carrying Satan’s child. And. . .that’s pretty much it.
Yet despite the film’s ample limitations, I liked it back in 1975 when I first saw it, and I liked it last night when I watched it again for the first time in 46 years on Shudder. The film has a couple original creepy effects and enough random bizarre moments (Jessica’s simpering husband is hounded by a demonic trio of negro San Francisco street musicians, Jessica’s son gobbles green pea soup straight from the can, her daughter carries around multiple copies of Erich Segal’s Love Story) and interesting experimental shots and abrupt cuts to keep it in the mildly amusing *good* bad horror movie category.
And yet the highlight remains, at least for the boomer crowd, seeing Juliet Mills (looking like a proto Kirsten Dunst) playing a projectile vomiting whore of Satan. I watched Mills as the goody-goody Nanny when I was ten, and then at age 15 I see her floating in the air, face disfigured, legs spread-eagle, begging Dimitri to reach up and rip Satan’s baby from her snatch?? Pretty trippy back then, and throwback trippy, now! 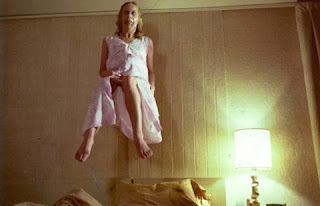 I've always been of the opinion the *stock market* has no relation to the *real economy,* the real economy being the paycheck-to-paycheck monetary existence of the tens and tens of millions of us chumps chained in wage slavery, us chumps who trade 40 or more hours a week of our lives at twenty bucks or less an hour.  Us chumps, to sum it up brief, who know the price of a Little Caesars pizza or a gallon of gas.

The *stock market* is a dump for the rich.  The rich dump the loot they steal from us chumps (example: the chump has to buy a shitty used car to drive to his shitty job, and the rich offers him a piece of shit that he can't buy without financing, so the piece of shit which is price-tagged at $7500 actually ends up costing an additional 3.9% or whatever).  The rich toss this loot in the dump, turn it into a company with a fancy name, then trade it back it and forth among themselves, giving each other *earnings,* which is what they call the money they create out of the thin air through which they play catch with each other's gold.

The rich get richer and richer off this usurious Ponzi scheme until it collapses, with whatever small loss on their huge gains they incur written off to their additional benefit on their crooked tax returns, and then they turn right back around and start it all over again. . .

But in the last couple weeks, the *stock market* has actually reflected the *real economy.*  The reddit wallsreetbets GameStop madness, in which the rich got sloppy with their *short* usury and didn't buy way too much of a worthless GameStop stock they pretended they were going to buy, and got put in a David-and-Goliath squeeze by some reddit nerds, with the result that the GameStop stock became an albatross around the necks of some of the rich, and a goose laying golden eggs for a few reddit nerds (if you want all the technical details of this nonsense, read this) became a sad sign of the times.

By the time the average poor chump heard of the GameStop squeeze and rushed to wallstreetbets to find out how to make some EZ money, the Game had already Stopped.  The $4 stock had almost hit $500, and was starting to slide back down when a rampaging mob of chumps tried to join the party.  Unfortunately, when the chump mob hit wallstreetbets, they encountered false prophecy after false prophecy predicting that GameStop was headed for another squeeze, and the stock would shoot back up past $500, then to $1000, $5000, $10000.  The chump mob was convinced a $4 stock priced at $300 was still a *ticket to the moon!*  Convinced?  No.  Not unless you believe half-a-dozen rocket emojis at the end of a day(trader)dreamer's fantasy is convincing.

No, the chump mob wasn't convinced, it was inculcated. . .

Ha, the chump mob saw Satan fall like lightning, and became initiates into the cult of usury, imagining they, too, could use the same magic as the rich, and transform into the rich. . .

So the wallstreebets GameStop madness must surely be a sign of the times, and a true reflection of the *real economy,* for only a mob of chumps driven nearly senseless by the unrelenting hopelessness of the *real economy* could latch on to such a desperate, mad belief.

Can you imagine the defeat, the impossibility of realizing a dignified income, the futility of paying your masters, that would provoke a mob of chumps to scrape and scratch, to beg, borrow or steal for one single $300 share of a dangerously combustible stock of GameStop in the hope it would turn into $5000 or $10000 in a couple day's time?  What kind of *real economy* produces such madness?  Only a broken economy, a economy beyond fix, an economy that may only be a $1200 stimulus check away from complete collapse.

It's an economy of great divide, the chasm now between the vast poor and the few rich so great, only a GameStop rainbow could bridge it. . .