Christianity In Our Age: NC-17 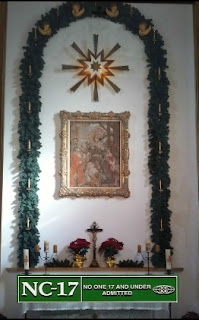 16 January 2019: Yankee great John Wetteland, who was MVP of the 1996 World Series as the team’s closer, was arrested this week on charges he sexually abused a male relative, officials said. The 52-year-old abused the boy from October 2004 to October 2006 — when he was between the ages of 4 and 6, according to his arrest affidavit. Wetteland is accused of forcing the boy to perform a sex act on him “on three separate occasions between the years of 2004-2006. Each of these three acts occurred while they were in the master bathroom shower located at [his] residence.”

Wetteland, a born-again Christian, was living in Bartonville at the time and serving on the board of directors for the Calvary Chapel church in Katy. “He volunteered to do it,” church leader Mark Martinez told The Post. Over the years, Wetteland has worked at Liberty Christian School in Texas as the school’s baseball coach and also taught Bible studies. He divorced from his wife, Michele, in 2015 and the pair had four children together.

The California native struggled with drugs and alcohol throughout his youth but was still able to land in the minors in 1986. According to Yankees analyst and journalist Jack Curry, he almost died twice — when he was just 17. “Once he nearly overdosed on a combination of drugs, including LSD, at a Grateful Dead concert,” wrote Curry in a 1995 profile on Wetteland for the New York Times. “Another time, Wetteland was in the front seat when a drunken friend rammed his car into a telephone pole. Something happened. He trudged on. He kept playing baseball and guitar. He kept walking crooked.” According to his then wife, Michele, “it was difficult for him to forgive his parents for some things he had to go through as a kid. He was really wild and really out there at one time and it was so opposed to my beliefs as a Christian,” she said, noting how “it really is two different persons with John. God’s word says the old man is cast off. John’s old man has been cast off. If you asked me if I sit here in awe of John and how obedient he has been to God’s word, I’d tell you that I do.”

Michele could not be reached for comment Tuesday and declined to speak to the Dallas Morning News.

There is no indication, YET, that Wetteland raped any little boys he encountered as a church representative.

BUT in the shameful case of Wetteland we do have a high profile boy raper who trumpeted his Christian belief (whatever that is. . .but for the purpose of this article's contention, let us assume he is washed in Christ's blood), AND his degenerate acts occurred in our current era of a Christian church stained with a seeming unending revelation of pedophilia.

The church appears over-represented (to put it charitably) with child rapers (and whether or not this is due chiefly to the sins of the catholics matters little to those outside the Kingdom of God, for they make little distinction between the sects of the visible church. . .to the unbelievers, Christians seem to have a problem keeping a respectable distance between themselves and the genitals and mouths of children).

What must our child-raping church do to regain any credibility?

Not its preferred confession du jour of making begrudging cash payouts to its victims when caught (the church essentially selling indulgences to itself), but a real confession.

The church must confess to the world it is not a safe place for children.

Simply put, no one age 17 and under allowed admittance to any church service or church-sponsored event.

The church must tell the world the truth, it cannot guarantee the safety of children.

Not as crazy as the alternative: continuing to allow children to be raped, and further discrediting the faith in the eyes of unbelievers.

The church can't ban pedophiles like Wetteland. Church is for sinners.  Its Founder declared:

They that are whole need not a physician; but they that are sick. I came not to call the righteous, but sinners to repentance.

Boy rapers like John Wetteland need a place to go. . .

Currently the church is a place for child rapers to hide. . .they hide their filthy desires while gaining intimate access to the juvenile flesh they long to defile. . .they mix their disgusting lusts with the trappings of the church, and thus disorient their young prey and make them vulnerable to their reprobate tendencies.

The last thing John Wetteland needs is a pew seat next to a cute five year old boy. . .

The church cannot remain the church by closing its doors to John Wetteland, but it can remain the church by closing its functions to children.  Let children learn about the faith of Christ at home from their parents.  If their parents can't go to church because they have no one at home to mind their children, then let them have church at home, the way it used to be done, anyway!

In point of fact, these so-called churches, where deviants like John Wetteland hide, are practically useless.  They are just coffee shops and drive-thru communion stations with feel-good playlists.

It's time for the church to put away childish things, and become a grown-up church. . .

What a radical statement if our contemporary churches closed their doors to children, put away their childish services, and became sanctuaries for honest sinners!

Imagine!  A church fulfilling its calling!

And I have no doubt this message is beyond the understanding of 99.9% of current church-goers. . .
Posted by Person X at 9:46 AM No comments: 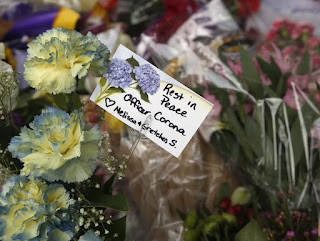 Associated Press, 14 January 2019: The man who shot and killed a rookie California police officer left a letter on the bed in the home where he lived claiming police bombarded him with ultrasonic waves, officials said. Police in the college town of Davis near Sacramento on Saturday made public the one-paragraph letter they said was written by Kevin Douglas Limbaugh, 48. He killed himself Thursday after fatally shooting Officer Natalie Corona. Police spokesman Lt. Paul Doroshov said the paper was found face up on the gunman's bed. "The Davis Police department has been hitting me with ultra sonic (sic) waves meant to keep dogs from barking," the letter said. "I notified the press, internal affairs, and even the FBI about it. I am highly sensitive to its affect (sic) on my inner ear. I did my best to appease them, but they have continued for years and I can't live this way anymore." The handwritten note was signed "Citizen Kevin Limbaugh."

As the community tries to come to terms with the death of Officer Corona, a candlelight vigil will be held on Saturday at Central Park located at 401 C St. from 6 to 9 p.m. to remember her. Residents of Davis and Yolo County trickled in and out of the Police Department parking lot on Friday, leaving offerings and paying respects. They all had different reasons for stopping by. Krista DeZerega-Thomson of Davis couldn’t help but tear up talking about the incident. She was at a community meeting in the downtown area when the shooting occurred, and while she didn’t hear gunshots, she was still shaken.

“For us it’s heartbreaking that she lost her life and we want to help the police department,” she said of Corona. “I felt affected, I felt my family was affected and I want the department and her family to feel love and support.”


This was a *Big Story* for

Yes, it's too bad this cop was killed.  For those directly touched by the killing, family and friends, those with a real connection to the dead cop, it is a troubling moment, and we hope they find solace.

But for the vast majority who reacted to the story, they, with their flowers at the memorial, their syrupy cliche comments on social media, their Pavlovian response to Media's *Thin Blue Line* iconography, they reflect America's sickness and shallowness, for they don't even see the story's other dead body, the misfit who killed the cop, then killed himself.

It would never occur to the typical mindless idiot American who lays a flower at the cop's grave to also leave a flower for the lunatick cop killer.

America used to take care of her misfits, there were actual mental hospitals for the mentally ill. . .now there is the only the county jail, where misfits pass through when they make a disturbance to the selfish social order.

Among a sea of news articles sacralizing the dead cop, where are the stories lamenting the suicidal cop killer?  The poor mental defective left untreated, uncared for, neglected to the point of his final madness, when he felt compelled to murder the flesh-and-blood representative of the phantom plaguing his mind, and then turn the gun to himself, finalizing his outcast status?

Amid all the rituals for the dead cop, the nauseating glorification of the uniformed, nobody seems to give a shit for the cop killer.  Well, that would require a little thought, an empathy that goes a little deeper than post-9/11 American *we are good, they are evil*-ism.

Only a sick, shallow society celebrates a dead cop and ignores a dead lunatick.  That's the truth.  It cannot be denied.  It also cannot be denied that the vast majority of Americans are completely comfortable in their sickness and shallowness, and will never repent, will never be healthy enough to care for all, and not just those they have been conditioned to believe are worthy of their care.

Media, and the idiot Americans who consume it, pretend to puzzle over the root of American violence, mass-shootings, fast-food brawls, Black Friday riots, etc., etc.  It's simply the fruit of a sick, selfish, simple-minded people, a people who lost their way long ago, and now smilingly invest their treasure in war and corporate welfare, instead of their neighbors.

If America is an ugly country, it can only be because Americans are an ugly people.  As the Lord Jesus Christ observed:

For a good tree bringeth not forth corrupt fruit; neither doth a corrupt tree bring forth good fruit. For every tree is known by his own fruit.

The sick act of cop killing cannot be cut out from its cloth and run up idolatry's flagpole. . .sorry. . .it can only be the sign of a sick and shallow people.
Posted by Person X at 8:41 AM No comments: