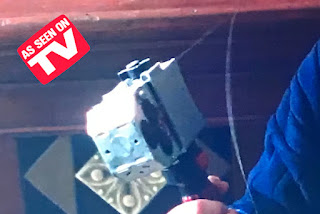 The only point in attempting to detail the plot of a Dario Argento movie is for the amusement value that results from the realization the story is actually 10x more absurd than what you thought it was while watching it.
So:
Trauma:

16-year-old anorexic Aura (played in one of her trademark *eccentric* performances by Argento’s thin 18-year-old daughter Asia) runs away from her treatment clinic and half-heartedly tries to jump off a bridge (why is she suicidal? Who knows? Maybe because food is depressing?) before being talked down by a passing motorist who just happens to be a TV reporter who is investigating the Headhunter, a by-the-numbers Argento maniac who decapitates *his* victims with an *As Seen On TV*-looking motorized slicing thingy. . .next, the reporter returns Aura to her parents' house on the very night Aura’s by-the-numbers Argento weirdo spiritualist mother (played by the ever-grand Piper Laurie) performs a seance (!?!? Because? Argento!) which ends with her and her effeminate husband being decapitated by the Headhunter and Aura being sent back to the anorexia clinic by the cynical hard-ass police detective played by James Russo, but, of course, the Headhunter's next victims just so happen to work at that same clinic, so while a couple nurses are being decapitated, Aura escapes with the help of the reporter who was coming to the clinic to break her out because, well, just because maybe Aura is a little bit jail-baity, because soon Aura and the reporter are having some statutory rape-type sex in between Aura’s bouts of not eating, or eating and then vomiting, in between trying to figure out who the Headhunter is, all before Aura becomes so depressed she wanders off giving the reporter, for some reason, the impression Aura has drowned herself which causes the statutory rapist reporter to become even more depressed than Aura was, so he immediately becomes a drug addict bum stumbling around for days or weeks or who knows how long before he sees a still-alive Aura and follows her to a house where all the insane secrets of the Headhunter are revealed:
[SPOILER ALERT!]
20 years or so prior, while giving birth to her first, pre-Aura child, Piper Laurie's baby is accidentally decapitated (!?!?), and the bumbling hospital staff responsible for the atrocity decide to give Piper Laurie a massive jolt of electroshock therapy so she will forget their little blunder. . .then, for some reason, the soul of the dead baby waits about 20 years to contact its spiritualist mother and tell her about the maternity ward massacre, urging her to seek revenge on the incompetent medical staff, some of whom, of course, ended up working at her anorexic daughter’s clinic, and so, yeah, Piper Laurie is the Headhunter, and had, of course, merely staged her earlier presumed decapitation, apparently James Russo and his crack police staff didn’t bother doing any DNA or any of that kind of detective shit on the headless corpse which they thought was Aura’s mother, but, that's just a typical by-the-numbers little Argento detail not to be bothered with. . .anyway, Aura and mom are now living in this random house, and when the reporter follows Aura there and discovers her and her mother are still alive, mom, of course, is going to have to decapitate him, and is just about to when she herself is decapitated, for real this time, by the nosy next door neighbor butterfly collecting kid who has been mad at Piper Laurie ever since he saw her pet lizard eat a butterfly. The End. 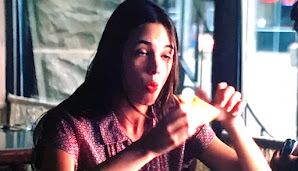 This is one of Argento’s weaker efforts, for sure, with little of his renowned clever camera shots, and only the child birth/decapitation scene living up to the maestro's master giallo arch-gore-stylist/oddball Freudian psycho-babble reputation. It’s also Argento’s first movie filmed in America, in Minneapolis, of all places, although it seems more like Turin than Minnesota, perhaps due to Asia’s exotic accent and the cast’s weird wardrobe, they look like they are wearing leftovers shipped from the set of Deep Red rather than crap from Gadzooks, American Eagle, or even Mervyn’s. Beyond whether Aura will be able to choke down a grilled cheese sandwich without puking, there is almost no tension in the film. The music score is also sub-standard for an Argento film, and the nudity is kept to a *bare* minimum as well, perhaps due to some hesitation on Dario’s part for exploiting his own daughter, though he can’t resist shooting one brief scene with a topless Asia: 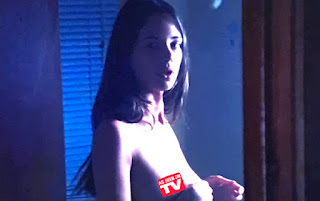 This is probably not even a mediocre movie, with the ludicrous script keeping you distracted from how boring it really is.  I mean, you barely even notice that the doctor at the anorexia clinic is Frederic Forrest, in one of his late oddball roles, or that one of the physicians who screwed up the childbirth is Brad Dourif, and he doesn't seem odd enough to even be a Brad Dourif character.  Not much of a movie, but then again, I saw it on Shudder, so what can we expect?
Posted by Person X at 11:52 AM No comments:

So says the Hero of the Hour, Zelenskyy. . .
He says it's impossible to just say, OK, Ukraine is now part of Russia.  Well, no, it's not impossible.  It's very easy, in fact, and it would save many lives. . .
Zelenskyy says *Ukraine* is worth x number of human lives. . .
When these x number of people die, they will discover there is no *Ukraine*. . .
Posted by Person X at 2:31 PM No comments:

1 March 2022: Residential areas in Kharkiv, Ukraine's second-largest city, were being pounded by Russian shells while a massive 40-mile convoy of Russian tanks and vehicles rolled toward the capital of Kyiv on Tuesday as the war entered its sixth day.
At least 11 people were killed and 35 wounded in the rocket strikes on Kharkiv, Interior Ministry adviser Anton Herashchenko said. He said the rubble was still being cleared and the death toll was expected to rise.

Closed-circuit television footage showed a fireball engulfing a street in front of one building, and a few cars rolled out of the billowing smoke.

Ukrainian President Volodymyr Zelenskyy called the attack on the city's main square “frank, undisguised terror. Nobody will forgive. Nobody will forget. This attack on Kharkiv is a war crime.”
At this point, blame for the deaths can no longer be solely placed on Putin. . .
It should be clear, even to the dumbest people, that lives would be saved if *Ukraine* surrendered. . .
Instead, Zelenskyy himself becomes a *war criminal* when he feeds the destabilized, psychologically fragile *Ukraine* people the following toxic spells:
Ukrainian President Volodymyr Zelenskyy received a lengthy standing ovation before and after delivering an impassioned speech to the European Parliament. "At least two cruise missiles have hit the main square of that city. That is the price of freedom," he said. "We're fighting just for our land and for our freedom." Zelenskyy added: "Every square in our country will be called Freedom Square. Nobody will break us, we are strong, we are Ukrainians."
LOL Tragic!
Let's make this as simple as possible:
Imagine a *Ukraine* waitress struggling to pay bills and feed her kid.  How is her life worse if Putin's puppet government administers affairs where she lives?  Is she no longer a waitress with an unremarkably dreary life?  Conversely, what if *Ukraine* *wins?*  What will this *great victory* have added to her life?  Other than a few funerals to attend and streets riddled with potholes to maneuver?
At this point, how many dead *Ukraines* and dead *Russians* would still be breathing if Zelenskyy had done the sensible thing and *surrendered?*  He should have dissolved his meaningless government and welcomed in Putin's stooges, and he would have saved hundreds, thousands of lives.  This cannot be argued against.
We feel sorry for the *Ukraine* people, and wish they could look deep inside themselves, instead of looking outside themselves at the fever hallucination *Ukraine.*  This Zelenskyy poison, this war enchantment, is for the benefit of a phantasm, an unreality.  There is no *Ukraine.*  The *Ukraine* people need to look deep within themselves, to the cellular level, for that is where they exist.  That is what needs fighting for, and they can save their own cells simply by surrendering.
The longer Zelenskyy peddles these *Ukraine* fever dreams, the more responsibility he must assume for this:

"Yesterday, 16 children were killed," Zelenskyy said. "Again and again, President Putin is going to say that is some kind of operation."
Those 16 children would be alive had Zelenskyy dissolved his government.  He says Putin will call it an *operation,* but is that anymore dishonest than Zelenskyy's *patriotic* propaganda?
There is no *Ukraine.*  There is no *Russia.*
Zelenskyy says he is fighting for *freedom!* LOL! The vast, vast majority of *Ukraines* wouldn't be any more or any less *free* no matter who runs their local government.  The *Ukraines* had a pro-Russian government less than ten years ago. . .I'm sure they can recall their lives were hardly different.
And so now they die of war madness. . .all the pointless *Ukraine* resistance glorified by the world's Media. . .when the *fog of war* lifts, and all parties look around at what's left, will they acknowledge they've been duped into a Satanic violence that accomplished absolutely nothing, other than lives extinguished so Zelenskyy could possibly keep his fancy job?
[The Truth is: there is only the Kingdom of God. . .which most people couldn't give two shits about.  So, an argument could be made about this *Ukraine* situation along the lines of: Let them alone. They be blind leaders of the blind. And if the blind lead the blind, both shall fall into the ditch.]
Posted by Person X at 12:27 PM No comments: