They Fuck Horses In The Ass, Don't They? 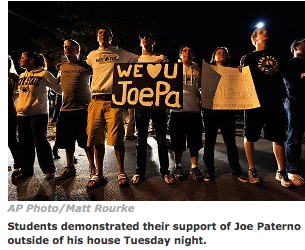 What were these idiots thinking??  Provincial morons like this are admitted to a supposed *prestigious academic institution?*  In a truly vulgar display, these imbeciles hold a *pep rally,* a party, no doubt drinking beer and flirting with each other, as they *rally* to show support for a disengaged old fossil of a coach who characterizes a grown man buttfucking a little boy as *horseplay.*  Do they all fuck horses in the ass in State College, PA?

{I wrote a little more about Pederast State University over here.}

At this moment the Board of Trustees should not spend a single minute discussing my status. They have far more important matters to address. I want to make this as easy for them as I possibly can.

Hey, old man, it's not for you to tell the Board of Trustees what to do.  Your status is part of this ugly situation, and it's up to the Board to decide if they want Pederast State University to suffer the embarrassing spectacle of you in the Stadium this Saturday, if they want their *prestigious university* to be ridiculed and shamed by the spectacle of 106,000 provincial boobs holding a pep rally for an old geezer who characterizes men buttfucking boys as *horseplay,* and who looked away from the obvious deviate behavior of his coaching buddy for years and years.  Yes, JoePa, the Board of Trustees does need to discuss your status.  Did you ever stop to consider that maybe you don't deserve one final home game surrounded by 106,000 fawning imbeciles?  Is missing one last fucking game too much of a punishment for you?  Can you not even bear that small atonement for enabling your buddy Sandusky to buttfuck kids with total impunity??  The truth is, JoePa, you are only interested in making this gruesome situation as easy for YOU as possible.

This is a tragedy. It is one of the great sorrows of my life. With the benefit of hindsight, I wish I had done more.

With the benefit of *hindsight?*  Who the fuck do you think you are shitting, JoePa?  You had all the sight you needed to do more, to do a lot more.  You had a grad assistant come to you and tell you he *sighted* your buddy Sandusky fucking a little boy in the *hind.*  There's your hindsight, for you.

Pederast State University loses all credibility as a *prestigious academic institution* if they allow Paterno to coach in dumbly named Beaver Stadium this Saturday. . .

The Board of Trustees at Pederast State University did the right thing by firing their fossil of a coach, Joe Paterno.  The Board could not allow the University to suffer the shame of having AmerICKa watch 106,000 provincial morons celebrate and congratulate and well-wish an out-of-touch old geezer who winked at years and years of serial buttfucking.  You just cannot allow that to happen, if you want your precious University to be taken seriously.  A couple days after it is revealed the Football Program has been a sexual House of Horrors for little boys, you stage a love-in for the man who presided over the bath house buttfuckings?  No.  You just cannot allow that to happen. 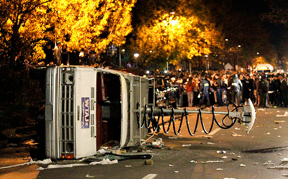 Tonight, once again, we see in small what would have happened in large on Saturday.  Once again the fawning imbeciles who attend Pederast State University vainly inserted themselves into the story by taking to the streets, this time adding vandalism, to show their *love* for JoePa.  These idiots apparently do not care or do not understand the message they send about their University:

Winking at serial buttfucking is not a sufficient reason to remove a man who has won 409 football games.  You cannot compare scores of little boys being buttfucked to outscoring Illinois 10 - 7.

Uh, tonight's vulgar display of misplaced values could not be repeated a hundred-fold Saturday afternoon, or Pederast State University would be the scorn of an appalled nation.  Joe had to go, it's as simple as that.

No need to feel sorry for JoePa.  His punishment for winking at serial buttfucking is missing his goodbye party?  Seems a terribly small price to pay.  The self-centered self-appointed saint of college football showed his true selfish colors to the very end, demanding the Board of Trustees grant him his goodbye party.  He lamely claimed this would make the Board's job easier.  Ha ha ha. . .sure, Joe, having the University suffer the stain of 106,000 fawning imbeciles blowing goodbye kisses at a man who winked at serial buttfucking Saturday afternoon would make the Board's job easier?  Uh, no.

The UNDENIABLE truth is this:

If Saint Joe had truly wanted to make the Board's job easier, he would have resigned immediately, and then implored the fawning imbeciles of Pederast State University to not make a sorry spectacle of themselves.  But he did neither.  Instead, he demanded his goodbye party, and encouraged the fawning imbeciles with his shockingly offensive front lawn homilies, asking drunken college students to pray for the victims of the serial buttfucking he winked at.  This is the legacy of Joe Paterno. . .
Posted by Person X at 11:16 AM 3 comments: