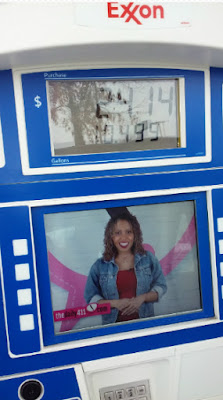 I was pumping gas earlier today at Exxon when all of a sudden I hear some negress jabbering gibberish.  I look around.  Where's the negress??  There's no negress.  But I hear a negress.  And then I see.  What the Hell??  The negress is on the fucking gas pump!  The fucking gas pump has a television, and the gas pump television is broadcasting some fucking gasoline show *starring* a high yellow negress.

C'mon. . .are people that addicted to electronica, to their screens, to their 24/7 media, they can't even be loose of it for the couple minutes it takes to fill their gas tank?

There's probably sheeple that watch Exxon TV!  They pump their gas and keep watching, transfixed, long after the tank is filled!  What's on next, they wonder? Perhaps that hot new Exxon Original, *Oil's Well That Ends Well,* a riveting drama about an Exxon mini-mart clerk who helps customers with timely advice on foot-long hot dogs and 5-Hour Energy drinks.

Binge watching at the gas pump. . .

But anyway, can you imagine the high yellow negress on Exxon TV?  She probably tells her peoples she got her own TV show, dat she a *star!*  Dey ax her what network she on:

I just googled this shit, and it looks like Gas Station TV has been around for at least 5 years, but today was the first time I've come across it. . .I must live in a real hick town.  But anyway, one more sign the Media Dictatorship demands your brain waves every waking moment. . . 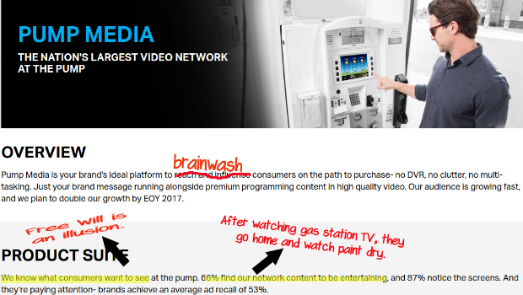 ##That you just want to consume, and be free of all other responsibility in life. . .
Posted by Person X at 4:43 PM 1 comment: 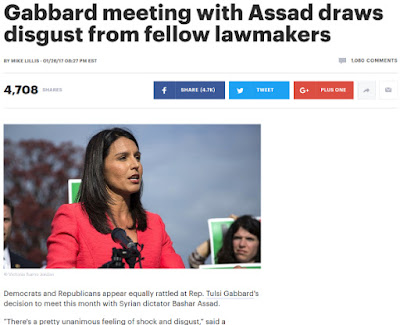 These American *lawmakers* who are upset with Tulsi Gabbard are the children of Satan:

Ye are of your father the devil, and the lusts of your father ye will do. He was a murderer from the beginning, and abode not in the truth, because there is no truth in him. When he speaketh a lie, he speaketh of his own: for he is a liar, and the father of it.

There is no truth in these *lawmakers,* who deny American responsibility for the deaths in Syria.  These *lawmakers* lie America into war after war, untroubled by the tens of thousands of deaths. . .and these deaths are a genuinely pointless slaughter, as they gain nothing in American National Interest, unless American National Interest is now reduced only to war profiteering.

Gabbard visited Syria and then spoke the obvious truth which so provoked the children of Satan:

As much of Washington prepared for the inauguration of President Donald Trump, I spent last week on a fact-finding mission in Syria and Lebanon to see and hear directly from the Syrian people. Their lives have been consumed by a horrific war that has killed hundreds of thousands of Syrians and forced millions to flee their homeland in search of peace. It is clear now more than ever: this regime change war does not serve America’s interest, and it certainly isn’t in the interest of the Syrian people. Their message to the American people was powerful and consistent: There is no difference between "moderate" rebels and al-Qaeda (al-Nusra) or ISIS — they are all the same. This is a war between terrorists under the command of groups like ISIS and al-Qaeda and the Syrian government. They cry out for the U.S. and other countries to stop supporting those who are destroying Syria and her people.

With the light of truth shone on their dark policies, these American *lawmakers,* the children of Satan, responded in fury:

"An elected official, a representative of the United States, went on a secret trip to meet with the brutal dictator who had murdered nearly half a million of his own people — it's reprehensible and cannot be justified,” Rep. Adam Kinzinger (R-Ill.), another Iraq War veteran, said Thursday in an email. “The actions of Congresswoman Gabbard have put our nation's reputation and foreign policy concerns at high risk and I couldn't be more disgusted.”

While the Hindu Gabbard is certainly no Christian dove, she served with the demoniac US Army in the Iraq War, it is astonishing that she is on the right and true side of the Syrian conflict, while the self-proclaimed *Protestant Christian* Kinzinger (like large numbers of American *Christians*) is on the side of Satanic violence.

Woe unto Kinzinger and the other children of Satan who abide not in truth, they shall die in their sins. 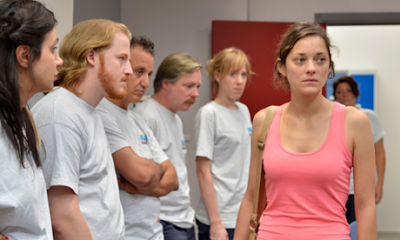 Well, this movie certainly couldn't be made in America.  Can you imagine the typical American movie-goer staring at this thing?  Where's the Super Hero?  Where's the gun?  Where's the nude scene?  They'd be fidgeting in their seats after five minutes.  Angry after ten.

So. . .the movie. . .it's about Sandra who along with her husband and two kids live scraping by, paychecks-to-paychecks.  It's the typical dismal Western existence, and it leaves Sandra so anxious and depressed, she's had to take a sick leave from her solar panel factory job.  While she's been out, the boss sees he can get by without her, if everyone else picks up an overtime shift here or there. . .so. . .the boss decides to ask Sandra's co-workers if they are OK with him shit-canning her as long as they get a thousand euro bonus for their extra work.  Hellz yeah!  they say, without Sandra around.  But a co-worker tells Sandra, and then they ask the boss if they can hold one more employee vote on the following Monday, the day Sandra was due to return to work. . .and that's the movie. . .Sandra has the weekend, two days, one night, to visit her co-workers at their homes and beg for her job.

As I said, this thing could never be made in America, even though Sandra is as American as apple pie and Xanax. . .yup, Belgian Sandra could easily pass as a regular American woman: poor, shitty low-paying job, too depressed to fuck (hasn't screwed her husband in months), addicted to pills and so overwhelmed by her tenuous hold on (western) life (which is almost completely ordered by money) she can barely get out of bed, let alone muster the will to beg for her job.  Yet she does. . .though it often requires the nagging of her chain restaurant cook husband.

And so that's the movie. . .scene after scene of Sandra interrupting her co-workers on their precious weekends. . .Sandra's half-hearted begging ruining the two days and one night when they try to forget how miserable their own Western material existences are:

Sandra: I'm here because Juliette and I saw Dumont.  He agreed to a new vote on Monday.  I wanted to ask if you'd agree to vote for me to keep my job.

Hand-wringing co-worker: I didn't vote against you.  I voted for the bonus.  Dumont put one against the other, not me.

Sandra: I know.  It's sick forcing you to choose. But I don't want to lose my job.  Without my salary, we can't get by.

Hand-wringing co-worker: I can't.  I need the bonus.  We need 500 a month for our oldest girl's studies.  How about the others?  What do they say?

Sandra: Robert, Juliette and Kader will vote for me to stay.  The others, I don't know.  You're the first I've seen.

Hand-wringing co-worker: You don't need to apologize.  I just can't, that's all.

There's 8 or 10 or a 100 (seeming) more scenes almost exactly the same, with only minor variations, some for and some against Sandra.  All the co-workers, except one young prick, seem sympathetic, but that thousand euros sure is tempting!

The only *action* consists of a frazzled Sandra popping Xanax, pulling the shades and crawling into bed:
[Actually, this would be a very soothing movie for the chronically depressed, it's best viewed in a dark bedroom, with the only other noise being a ticking clock.]

Well, this is the kind of socially conscious drama that used to get made in Depression-era America, and which the Coen brothers mercilessly mocked in Barton Fink. . .so you couldn't make this movie now in America, in today's America, where social consciousness is seen as perverse:

health care for everyone?  are you crazy?

those darkies are out of their minds, protesting the police!

just eat your gmo food and vaccinate your kids and be happy like everybody else!

On the other hand, I don't want to give the impression Two Days, One Night is revolutionary cinema, either. This ain't Bicycle Thieves. The plot (those 8 or 10 or 100 scenes of Sandra pleading for her job) is rather thin, and one must not wonder too long how a person like Sandra would ever summon the desire and energy to endure her grueling weekend of dignity-crushing begging. That the film works to the surprisingly high degree it does is due chiefly to the stellar acting of Marion Cotillard. It's a mostly physical performance. . .the subtle body language, facial expressions and near-flat affect of an ordinary woman nearly ground to nothing by the millstone of *everyday life.* Cotillard makes Sandra a convincing modern secular saint, one who carries her burdens from doorstep-to-doorstep with a mustard seed of faith in her fellow man, and who thus manages to endure until the end [without *going postal,* which is how an American remake would end.]
Posted by Person X at 11:48 PM No comments:

The problem with FAKE news is how quickly it gets forgotten. . .so that the same old bullshit is repeated decade after decade, and is happily swallowed by the idiot masses.  The much-revered (in AmerICKa) Israeli leader Netanyahu (whose wife steals pop bottles) has made a (tawdry) political career by serving up FAKE news.  His whole schtick consists of preying on Jewish holocaust insecurity, which he perpetually increases by delivering FAKE news.  One such typical Netanyahu FAKE news example is the Iran Is Only Months Away From Having The Bomb story (details here).

Anyways, here's some FAKE news from a year-and-a-half ago. . .remember? 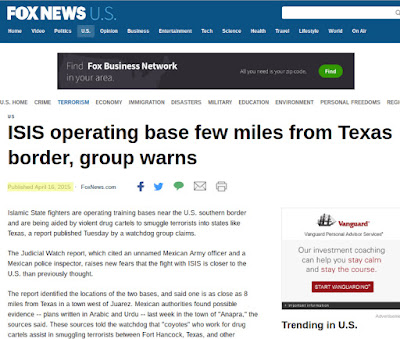 So, whatever happened to these ISIS trainees?  This *news* was published 16 April 2015, 632 days ago.  The US Marine Corp training program is only 13 weeks long, and these ISIS trainees have been out there 90 fucking weeks?  Of course not. . .the news was

But this story will pop up again, in one form or another, and the sheeple will once again fall for it. . .*terror* is an easy sell, because it allows the sheeple to imagine themselves innocent victims.

A much tougher sell has been the Russia Rigging The Election FAKE news. . .quite simply because the idiot masses only need ask themselves did they vote for Trump of their own *free will* or not?  They're convinced of the real FAKE news: that Trump is their advocate, so even if Russia helped Trump, who cares?

The really successful FAKE news will always prey upon the masses fears and insecurities. . .anything that requires attention beyond the basest drives will never take root within the infantile masses.  All these Putin Bogeyman stories will never amount to anything other than spitting in the wind. 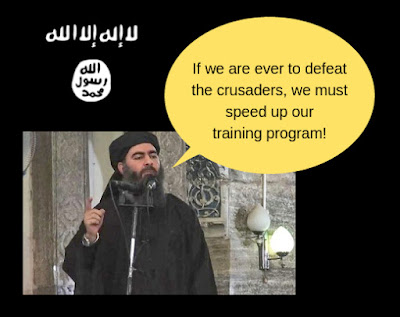