A Movie, Some Netflix Shows 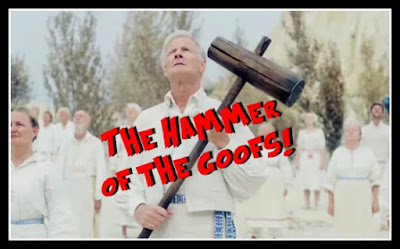 Midsommar: Twenty-something Dani is a fairly typical modern American white girl: an anxious, depressed, clingy mess. . .and that's before her sister and parents die in a murder/suicide.  After that, well, she's even more of a bummer, such a wreck that her boyfriend Christian (a typical American Christian, in that he's not Christian) wants to sneak away to a Swedish commune and enjoy its once-every-ninety years grand celebration of all things white and pagan.  But Dani finds out about Christian's little getaway, so Christian, burdened by guilt, invites her to join him and a few of his other pals for the holy pagan days under northern Sweden's never-setting summer sun.  Midsommar starts out as an eerie, creepily effective juxtaposition of modern scientific and ancient pagan treatments for the disordered mind, but soon melts under the hot Scandinavian sun into a muddled puddle of pagan nonsense. None of the rituals make any sense, but they do make for arty, gOOfy, gory daylight nightmares: for example, two old people dive off a cliff, one face-first, the other feet-first, onto boulders, and then have what remains of their skulls crushed with a giant mallet.  There is no point in bothering to wonder what any of Midsommar's bloody and/or kinky faux-rituals mean.  They are meaningless, and, if we want to give the sometimes black-humored script a credit it may not deserve, may simply be viewed as Grand Guignol placebo effects, which somehow manage at film's end to leave poor sad Dani with a smile on her face.  Midsommar is not a *good* movie, because it never seriously advances a homeopathic alternative to our xanax society, but only wallows in lurid/absurd camp paganism.  Still, one cannot deny it is an artfully constructed decadent distraction.  Perhaps one could even label it a prototype from an emerging À rebours school of film making, a celluloid version of Huysman's bejeweled tortoise shell.

Chambers: A poor teenage Native American girl has a heart attack, and receives a rich white girl's heart in a transplant.  The Native American becomes haunted or possessed or some shit by the white girl, who died, as they say, *under mysterious circumstances,* possibly at the hands of one or more members of her weird New Age family.  Chambers is a slow-moving mess of racial and class cliches stewed in a convoluted crystals-and-shamans cult horror script. The show is too stupid and poorly acted to hold one's attention to its jumbled script.  The main character, the Native American girl, is played by a splotchy-faced newcomer named Sivan Alyra Rose.  She looks like an ashy-faced, cheaply-made Zendaya knock-off.  And her *acting* is the biggest horror of the show, she scowls and pouts through ten interminable episodes, making her character an unsympathetic victim of the heart transplant hocus-pocus.  It's hard to believe anybody watching this dreary supernatural mess could care whether her perpetual bummer of a character lives or dies.

Stranger Things, Season 3: And it's hard to believe how far this show has fallen. [If I were Rex Reed, I'd now call this an *ossified franchise*]  It has always featured a remarkably unappealing cast of pasty-faces, greasy-hairs, bug-eyes, anorexics and fat slobs, and the cast grows even more repulsive-looking with each season, and adding to the over-all ugliness of the characters in season 3, the costume designer has dressed them in the most hideous shorts and cut-offs from the '80s. . .if you love looking at spindly white legs, this is the show for you.  But the series itself has degraded from season one, which was a fairly fresh and decently plotted thriller, into season three's weird kiddie porn/sitcom/conspiracy/monster streaming bric-a-brac where Hopper spends an inordinate amount of time trying to catch the barely-teenage Mike and Eleven making-out and where shopping malls are actually a Russian plot to de-magnetize America's refrigerator magnets, or some shit.  The Mind Flayer also shows up to torment a fat old lady before possessing pool boy/gigolo-wannabe Billy, a preening bully of a character we are meant to, but do not, feel sympathy for because of one brief flashback scene showing his daddy yelling at him for being a shitty baseball player.  Anyway, other stuff happens, you know, Eleven holds out her arms and has nose bleeds in *fights* with the Mind Flayer, she gets a Mind Flayer boo-boo on her leg which Jonathan tries to fix but only manages to make the other kids take the Lord's Name in vain, two of the kids are revealed to be trendy gays, and they all squabble unmercifully for eight tedious episodes.  No show in the history of television has ever featured more screeching, shrieking and shouting.  The cast scream insults at each other in an ear-splitting atonal assault meant to mask, one supposes, the script's utter lack of harmonic development. Yes, season three's much-hyped *moving ending* is satisfying—because all the kids finally wear long pants.  That this show is still a *hit* and fairly-well reviewed, reveals just how stupid and undiscerning American audiences and critics have become.

Dark: With an attractive cast of competent actors, this series about the apocalyptic events brewing in a small German town focuses on four dysfunctional families with more than enough skeletons in the closet to plot a dozen soap operas. . .although, given that each of the families sport a time-traveler or two, this is Soap Opera on a Cosmic Scale.  The intelligent, clever, endlessly thought-provoking script features time-traveling based on the Causal Loop Paradox, where an object or information from the future can be sent back to the past and creates a never-ending cycle in which each object no longer has any real origin, as if it exists without having been created.  The paradox of time's never-ending cycle also creates the show's heavy, tragic, fatalistic gloom.  No matter to what extraordinary lengths the characters will go to try to change the past and prevent the apocalypse, nothing avails (at least, through the show's first two seasons).  And trust me, this brief synopsis barely scratches the surface of Dark's thematic foundations.  There are cultic, biblical and mythic elements as well, that combine with the time-traveling soap operatics to create a remarkable philosophical meditation on the nature of Time and its consequences for man.  Unlike most of current movies and television, Dark is not easily forgotten.
Posted by Person X at 5:49 AM No comments:

Go Back Where You Came From! 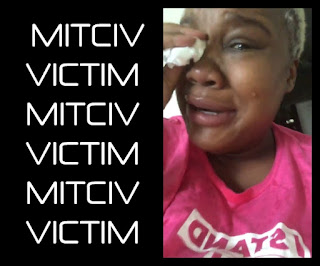 21 July 2019: Georgia state Rep. Erica Thomas, who asserted in a tearful Facebook post that a white man at a Publix grocery store told her to "Go back to where you came from!" seems to be less sure that the Friday encounter was exactly how she remembered. After reaffirming to reporters Saturday that a white man had verbally accosted her and her daughter telling them to "go back" to where they came from in a racially charged tirade, Thomas was interrupted by the accused man himself, Eric Sparkes, who had a very different story to tell. Sparkes accused Thomas of faking the story for political purposes, saying he was, in fact, a Cuban American Democrat who was simply irritated that she brought so many groceries to the express checkout lane. Thomas rebuked Sparkes' version of events, however, in an interview later in the day on Saturday, saying, "I don't know if he said 'go back,' or those types of words ... I don't know if he said 'go back to your country' or 'go back to where you came from,' but he was making those types of references is what I remember."

A local journalist further asked her, "So you don't remember exactly what he said?" Thomas replied, "No, no, definitely not. But I know it was 'go back' because I know I told him to 'go back.'" In Thomas' original video, the black lawmaker tearfully recounted a traumatic incident in which a man began using racially charged insults after accusing her of bringing too many groceries to the express checkout line. Thomas posted the video to her Facebook account on Friday evening. Thomas' story quickly gained traction in the wake of President Trump's "go back" tweet as the media seemingly believed her version of events, and #IStandWithErica began trending on Twitter.

I have little doubt that the *white man* is telling the truth when he claims he never told the large Georgia state representative Erica Thomas to go back to her country.

It's hard not to be disgusted by Erica Thomas' crybaby Facebook video, in which she weeps over a *hate crime* that almost certainly never occurred.

We must remember Thomas was raised in a culture in which from her birth and continuing on throughout her entire life she has been told her skin color has disadvantaged her.

Can we therefore be surprised if her sense of victimization has become so internalized, she can no longer accurately process reality?

Ms. Thomas admits as much herself, in her hemming-and-hawing confession that she cannot actually remember what the *white man* said to her:
But her identity has become so fused to a sense of victimhood, she is nonetheless convinced racist *references* must have been made.

When the *white man* approached Ms. Thomas and began to confront her over what he perceived to be her selfish use of the check-out lane, Ms. Thomas, traumatized by her lifetime of *disadvantage,* suffered a break from reality.  The psychological stress Ms. Thomas felt from being confronted by a *white man,* the fearsome figure she had been told from birth had the ability to control her life, produced a classic hysterical reaction: selective amnesia, volatile emotions, dramatic attention-seeking behavior.

Thus, to simply call Ms. Thomas a liar, would be a disservice.

More accurately, she should be considered psychologically retarded, and not fully responsible for her actions.  Part of the blame for her hysterical Facebook video and false claim of a *hate crime* must be assigned to the anonymous creators of the culture of Black disadvantage.

Of course, we must not overlook President Trump's role in this sad, pathetic racial farce.

It is no coincidence Ms. Thomas suffered her break from reality shortly after President Trump issued his *go back where you came from* tweet to four congressional colored women.  Unquestionably Ms. Thomas, as a colored Georgia congresswoman, identified with the objects of Trump's *hate.*  With this added stressor, whether conscious or unconscious, Ms. Thomas was much more susceptible to a psychotic break.

Thus, the more President Trump singles out colored people for attack, the more hysterical *hate crimes* we will see. . .

Well, that's America, a melting crackpot with few sympathetic figures.  One can only chuckle when trying to imagine, in regard to the rather absurd state of current American racial affairs, what Native Americans must think of all the noise over border *concentration camps* and the juvenile calls for people to *go back where they came from?*
Posted by Person X at 3:56 AM 1 comment: