And To Every Man His Work 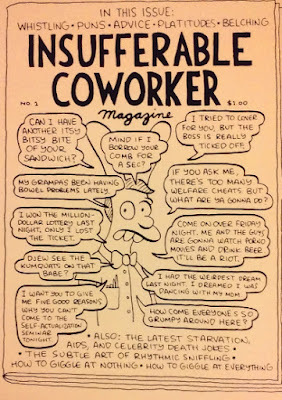 "Throughout her history, God has used America to correct the nations," proclaims the co-worker.

I guess some people, many people, even, get along with, and even like their co-workers.  They arrange workplace potlucks and after work get-togethers at bars and restaurants.  Haven't we seen motion pictures which depict co-workers enjoying each other's company while performing karaoke?  So this camaraderie must occur in *real life*. . .

As for me, I do not condone, but do understand workplace violence. . .

By way of answer, the co-worker offers a faggy *hmmph,* and then haughtily intones "it's obb-vious!"

The garbage, the lies, the vomit I've had to listen to while working for no good reason for thirty-five fucking years at crummy jobs!

The shitty thoughts of pew-warmers and TV watchers!

"So. . .those two or three million gooks America killed, that was God correcting Vietnam?"

"What was God correcting?"

"Vietnam is still communist," I say.

"It's more complicated than that!"

So many nitwit co-workers over the long, long years of idiotic work.  The vast, vast majority of them *proud Americans.*  Proud of America's wars, proud of all the sinners righteous America has killed.  So proud to sacrifice their lives for ten or twenty bucks an hour on the altar of the nation that slaughters millions who make ten or twenty bucks a week. . .

"So when all those sand niggers were killed because America thought Iraq had weapons of mass destruction, and it turned out there weren't any weapons, was God wrong, too?"

"That was never the reason for the war!  Geez!  Duh!  It was to stop terrorism!"

"Once Obama's gone and we get Trump in there, we can rebuild the military and finish what Bush started."

"So God's had to sit around the last eight years, waiting for Americans to vote right?"

"Pretty much.  He gave us our democracy, and He's faithful to His word, even when we screw up.  That's how much God loves America!"

Thirty-five fucking years working next to these perverts. . .assaulted by their shitty thoughts. . .minimum wage false prophets with their Dollar Store abominations of desolation.

For the Son of Man is as a man taking a far journey, who left his house, and gave authority to his servants, and to every man his work, and commanded the porter to watch. Watch ye therefore: for ye know not when the master of the house cometh, at even, or at midnight, or at the cockcrowing, or in the morning: Lest coming suddenly he find you sleeping. And what I say unto you I say unto all, Watch.
Posted by Person X at 3:32 AM No comments:

The Teachings Of The Desert Father

As an explication on our essay *How Much Is That Doggie In The Window,* the Desert Father air mailed the following picture postcard stricture from his hermitage: 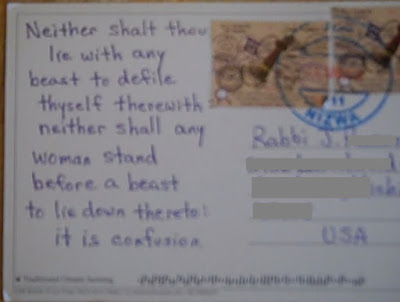 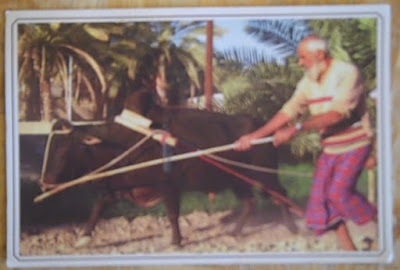 The *Logic* of the American *Christian* Ted Cruz 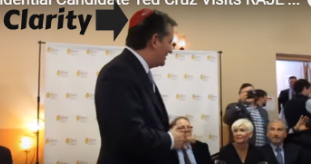 Israelnationalnews.com, 8 April 2016: Senator Ted Cruz (R-TX) on Thursday spoke before Orthodox Jews in Brooklyn shortly after baking Passover matzah, in a pledge of support for the Jewish community and a call for votes ahead of the New York caucus. "Sometimes people ask why did this Texas Cuban Southern Baptist become one of the leading defenders of Israel in the Senate? And I think a lot of it has to do with being the son of an immigrant who fled Cuba, who was imprisoned, who was tortured," he said, relating with his largely Russian Jewish audience. Noting on Hamas rocket attacks against Israel, he said, "let me say this as an American, God bless Prime Minister (Binyamin) Netanyahu, a voice of clarity in a time of confusion, in a time of foolishness, in a time when the United States is sending $100 billion to the Ayatollah Khamenei."

By what logic can a self-proclaimed baptist claim that a man who denies that Jesus is the Savior remains, nevertheless, a voice of clarity in a time of confusion?