How Much Is That Doggie In The Window?

Imagine if a nigger muslim in France made four white gals fuck a dog. . .

Imagine. . .and it wouldn't be like that pantywaist John Lennon *Imagine* song, no, sir.

No, if a nigger muslim in Gay Paris made four white gals fuck a dog, there'd be flowers left at the kennel, anti-nigger laws passed, a day of mourning, solidarity marches, the Eiffel Tower lit up in whatever color symbolizes white self-pity, and the gendarmes checking out the dog licenses of every nigger dog-owner in France.

Colored people get fucked over 24/7 all over the world, and they barely make a peep, or if they do make a peep, nobody can hear it over white nit-picking. . .but when white people have their little tragedies, and they are so fucking little they can name their tragedies after the month and date (9/11 in the USA, 3/22 in Brussels, etc.). . .one fucking tragedy and the whole day is forever ruined and subject to memorializing. . .if colored people did this they'd have to have a memorial service every day of the year. . .

These things I have spoken unto you, that in Me ye might have peace. In the world ye shall have tribulation: but be of good cheer; I have overcome the world. . .

Haha!  I'd forgotten that Fiorina was more nauseating than Cruz!

Look at the two together!  Two utterly repellent human beings!

Look how Fiorina condemns herself as double-minded:
Hahahaha!

Listen, if Donald Trump, essentially a harmless buffoon, is Hitler-Lite as Media loves to promote, then what are these two 100% corrupt, dishonest, amoral office-chasers?

Ted *Carpet Bomber* Cruz and Carly *Rebuild The Sixth Fleet* Fiorina would kill more people than Godzilla. . .and would expect to be worshiped by the sheeple for it.

The comedian Louis C.K. recently sent out an email to his fans, begging them not to vote for Donald Trump. . .C.K. is a funny guy and he makes funny TV shows. . .and he ought to stick to that instead of making voter guides if he thinks Trump is the true danger.  These Military Media Complex Robots like Cruz, Fiorina, Clinton and Kasich are far worse morally, for they actually know what they are doing, while Trump is merely mugging for the camera.

[Bernie Sanders?  He appears a little more humane than the others, though he did support the wars in Serbia and Afghanistan. . .but if you're one of those sheeple who feels like you have to vote, vote for this candidate.]

The sheeple ought to wonder how a shrew like Fiorina ended up as one of their choices for Figurehead.  Idiotic and unlikable, a failure in the business world, all of a sudden she shows up on the television screen in those retarded *debates* as if she was a legitimate candidate!  There she was huffing and puffing against Vladmir Putin, of all people!, a real statesman!

There was no *groundswell* for Fiorina.  No popular support.  Nobody wanted her or even knew who she was. . .and yet all of a sudden she's shoved in the sheeple's face as if they had asked for her!

Nobody asked for that God damned dumb cunt, or for that creep Ted Cruz, or for any of these jackasses!  But that's the sheeple's choice. . .and, amazingly, they seem to take it seriously!  Haha!

Democracy?  Are you shittin' me??  It's a God damned prank!

Trump is *frightening,* but not these other idiots?  You got it fucking backwards.  Trump is the least frightening of all. . .because he wasn't shoved in our face by the Unseen Powers.  He comes to us out of his own naked vanity, which is certainly less frightening than these mystery stooges in their *people's choice* masks. . .

The Witch and 10 Cloverfield Lane 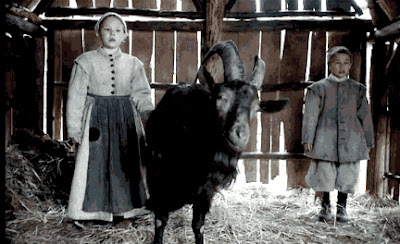 I seen two movies recently, and a couple things about 'em bother me:

The Witch: So it's 1630 or whatever and Satan ain't got nothin' better to do than go possess some beat-up old black goat and prank some nobody family of gullible Puritan New England sod busters?  I mean, was the world already so thoroughly damned Satan didn't need to bother messing with Louis XIII or Phillip IV?  It'd be like Rasputin choosing to cast a spell over some grubby St. Petersburg washerwoman instead of the Tsarina. . .what's the point?  It don't make sense. . .

But, anyways, it's not terrible. . .but don't bother watching it if you are expecting a *horror* movie. . .it's more a drama of religious paranoia and a character study of those overly-pious Luke 13:4 types who see The Hand of God at work every time someone slips on a banana peel.   There are a couple of arresting *shock* scenes tossed in, the hi-lite being a witch engaging in some barnyard follies with a goat, but these profundo rosso moments don't fit with the rest of this otherwise gloomy fifty shades of Decalogue melodrama.

10 Cloverfield Lane: At the end of the movie the damsel in distress uses a little itty-bitty Molotov cocktail to kill a Monster that caused some kinda airborne ecological disaster that killed shitloads of people. . .so. . .uh. . .doesn't the United States' $666 billion military have, like, a cruise missile or something that coulda 86ed the Monster from the git go????  (Huh?  Oh.  Right.  Sorry!  Guess I shoulda used one of them *Spoiler Alert* thingies.)

The True Purpose Of *The War On Terror* 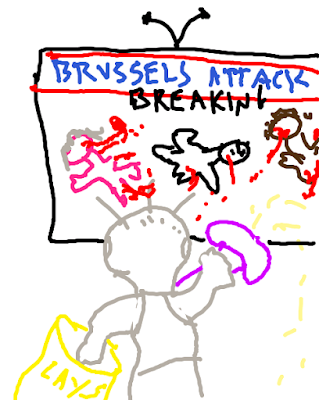 Lesson To Be Learned From Brussels 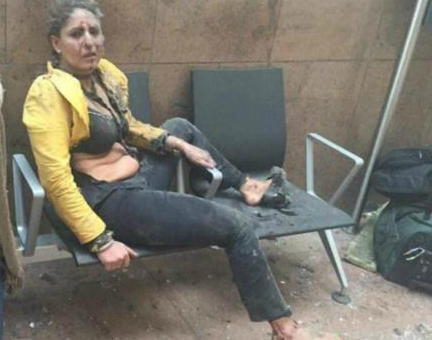 NOTE TO SELF: Start hittin' the gym, cuz ya never know when yer gonna get caught in a terror attack!
Posted by Person X at 7:14 AM No comments: 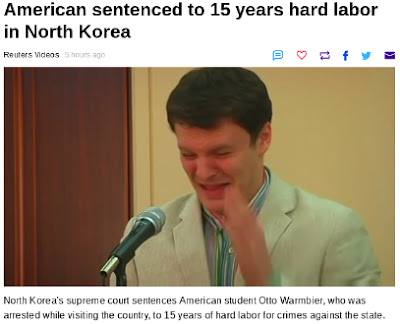 So this fucking crybaby has to do 15 years hard labor in North Korea?  Big fucking deal.  It's a small price to pay for reaping the benefits of living in BabylonUSA.  This fucking crybaby is undoubtedly a supporter of the US government, and I bet he never gave a fucking thought to his government's 65 year treatment of North Korea:

From the outset, the aim was to wipe out every urban center in the North. In his recent book, The Korean War: A History (Modern Library, 2010), Cumings notes: “The United States dropped 635,000 tons of bombs in Korea (not counting 32,557 tons of napalm), compared to 503,000 tons in the entire Pacific theater in World War II…. [A]t least 50 percent of eighteen out of the North’s twenty-two major cities were obliterated.”

To comprehend the scope of the destruction of North Korea by U.S. air power, consider some comparisons. In Germany, estimates of the number of civilians killed in the Allied air war range from 305,000 (U.S. Strategic Bombing Survey) to 600,000, out of a total German population of 78 million. The bombing aimed at destroying the Reich’s industrial capacity and breaking morale through sheer terror. Where the civilian population was targeted with firebombing – notably Hamburg and Dresden – this was widely denounced as war crimes. In Japan, due to racist prejudice the U.S. rulers had fewer compunctions about indiscriminately slaughtering Asian, rather than European (“white”) civilians (see John Dower, War Without Mercy: Race & Power in the Pacific War [Pantheon Books, 1986]). Some 100,000 people were killed in a single firebombing raid on Tokyo in March 1945, and more than 200,000 were murdered in the atomic bombing of Hiroshima and Nagasaki that August. In Japan, estimates of civilian deaths range up to 600,000, out of a total population of 72 million – the same scope as in Germany, but over a much shorter time period of nine months.

In North Korea, in contrast, the U.S. bombing went on for three years, and its purpose was not terrorizing the population, it was annihilation. Cumings quotes Curtis LeMay, the architect of the aerial bombing that incinerated Japanese cites (and who later advocated bombing Vietnam “back to the Stone Age”). LeMay says he argued with his Pentagon superiors at the outset to “let us go up there . . . and burn down five of the biggest towns in North Korea.” While there were objections about civilian casualties, he said, in the end “over a period of three years or so . . . we burned down every town in North Korea.” The number of civilian dead in North Korea during the war was over 1 million, and total casualties were 1.5 million-plus, out of a total population at the time of 8-9 million: almost 20 percent of the population.

This fucking crybaby thought he could go into North Korea, steal one of their *comical* (in his typically dumbass AmerICKan point of view) propaganda banners and take it back to the US as a *souvenir.*  Hey, dumb ass, your fucking government burned half their fucking country, when their people were no threat to your people, and your fucking government has never stopped fucking with them. . .so, yeah, maybe they are a little *paranoid* and kOOky, but they got a couple million charred corpses worth of reasons for being so.

And even if the North Koreans framed him, he's still a dumbass fucking crybaby for thinking he can *holiday* in a country his government perpetrated a holocaust against.  15 years hard labor seems about right for such monumental poor taste and bad judgment. . .

"Hey, where do you wanna go for Spring Break?"

"Nah, we go there every year.  Let's go some place different, for a change."

"Hey!  I got it!  Let's go to North Korea and laugh at how crazy the survivors are!!"