Powder Keg USA: The State Of The Virus 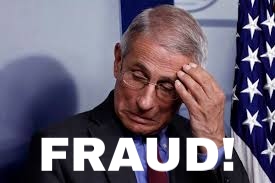 For a week Media has been mourning the bruised ego of the greaseball epidemiologist Tony *Two Face* Fauci. . .

Poor Widdle Tony!  TrumpCo has been saying mean things about him and doesn't listen to him anymore and won't let him go on the Big TV Shows anymore!  It's so sad, so tragic, so unfair! Wah wah wah!

I got no sympathy for the greaseball Fauci. . .

Months and months ago, way way back on 20 March, when even the right wingers were praising the great greaseball, I stated here he craved the spotlight above all else, and I have been proven correct.

His lust for the spotlight caused him to lie, to knowingly give incorrect medical advice to sheeple, and ultimately cost God only knows how many lives. . .

Fauci has confessed he lied when he said this:
Fauci admitted he lied because he wanted to cover-up TrumpCo's devastating PPE procurement failure. Fauci knew if he told the American people the truth, that they should be wearing masks, but that TrumpCo couldn't provide enough for them and hospital personnel, that Trump would ban him from the Daily Coronavirus Briefings, in which he could preen before all the adoring world as an *expert!*  There is nothing Fauci loves more than adoration.  So Fauci lied to the American people, told them they didn't need masks, just so he could remain on the Big Stage with Trump.

How many people caught the virus and DIED because greaseball Fauci told them they didn't need a mask?  Because if he had said right from the outset people should wear a mask, then they would have—that's how great his influence was at the time.

So spare me the tears and the lamentations for the greaseball Fauci's bruised ego.  The guy is interested in his own reputation and esteem first, not the health and safety of the sheeple. Fuck Fauci.  Fauci lied, sheeple died.

As for the redoubtable coronavirus, it's spreading at a rate that is alarming to Media, but not to sheeple, who appear only to want to go about their business in as close to normal a fashion as is possible.

Yes, many sheeple wear masks, and try to observe social distancing when it doesn't interfere with beach parties or bar nights, but there is no clamor for a second round of *shelter-in-place* orders as the hardworking COVID infects much of the half-hearted virus-fighting America.

It now seems certain at least 200000 sheeple will die, far more than in any European nation, and far, far, far more than in China, Japan or South Korea.  This exposes Americans as resigned to a federal government and a patchwork private health care system that are broken.  And, indeed, in the case of the federal government's rudimentary response, one can truthfully say the job was not even shoddily done, for the work was never completed—it was abandoned by an impatient Trump just as the impartial virus was taking hold in the President's beloved red states.

Interestingly, for approximately 40% of the sheeple, the MAGA herd, the more the hospital beds and morgue freezers fill up, the more they worship and defend Trump, and pray without ceasing to their unknown god for his reelection.

Trump's disconnect from the reality of the virus pandemic is itself a virus he spreads to his maskless followers.  That some of them then die a fool's death doesn't seem to matter.  In this sad regard, the great maskless remind one of muslim suicide bombers who believe some great reward awaits them in the afterlife.  The MAGA maskless believe their god commands the gospel of Trump must be spread, and so a competent virus response, in contrast to Trump's abandoned effort, is seen to be anti-Trump, and must be zealously opposed.  This insanity, coupled with the resigned passivity of the rest of the sheeple, creates a fantastically healthy environment for COVID, and leaves America an occupied territory.
Posted by Person X at 4:36 PM No comments:

American Powder Keg: We Are Good, We Are Evil

3 July 2020: President Donald Trump railed against "angry mobs" that tried to tear down statues of Confederate leaders and other historical figures, warning thousands of supporters at Mount Rushmore that protesters were trying to erase U.S. history.

Our nation is witnessing a merciless campaign to wipe out our history, defame our heroes, erase our values, and indoctrinate our children. Angry mobs are trying to tear down statues of our founders, deface our most sacred memorials, and unleash a wave of violent crime in our cities. Many of these people have no idea why they’re doing this, but some know what they are doing. They think the American people are weak and soft and submissive, but no, the American people are strong and proud and they will not allow our country and all of its values, history, and culture to be taken from them. Here tonight before the eyes of our forefathers, Americans declare again, as we did 244 years ago, that we will not be tyrannized, we will not be demeaned, and we will not be intimidated by bad, evil people. It will not happen.

George W. Bush, a ruthless killer of colored others, defined 200+ years of American Exceptionalism in six impossible to misunderstand words:

We are good, they are evil.

America could kill colored people to advance her manifest destiny for this very simple reason: Americans were good, the others were evil, thus it was OK to exterminate them.

But now Trump, desperate to be re-elected, desperate not to branded for history as a loser, seeing his path to victory choked with virus molecules and angry young white girls in short-shorts, and lacking the intellectual capacity to understand the significance and remedy to either, looks for a scapegoat upon which to unload all his misery.

Remarkably, and unlike the *great* American heroes of the past whose mantle he seeks to claim, Trump's scapegoat isn't the other.  The evil ones are now American!

Trump has violated the last taboo of American hate.  Prior to this, no matter how divided the nation, all Americans were considered good.  Lincoln never called the confederates evil, he said they were Americans in rebellion, and pardoned them all after the Civil War.  Of course, in actual deed, many Americans have been treated as if they were evil, but they at least had the theoretical dignity of being considered American good.

Under Trump, there is now a class of evil Americans, fit to be categorized with the colored others beyond America's borders.

I have seen very little recognition of Trump's astonishing denunciation of American citizens as evil.  White girls in short-shorts evil?  This is insanity!  Trump is so disconnected from reality, so unable to grasp the meaning of the street protests, he can only offer the most simple-minded reaction: they are bad, they are evil. They are an enemy we must fight.

Trump has declared war on white girls in short-shorts. . .

America does have a wicked, violent history of oppression and exploitation, and perhaps to further accelerate her merited demise, she will be punished with four more years of this Grand Buffoon as President.  This is what America deserves, and this is what Trump fails to understand: that his presidency is not a blessing on the nation, and a validation of his life, but a curse upon the nation and a condemnation of his life.

The most absurd statement of Trump's rubbish speech was American protesters have no idea why they are protesting.  This is merely a projection of Trump's own befuddlement.  The white girls in short-shorts know why they are protesting.  They are ashamed of America, and offer their marches and sloganeering and kneeling as a secular form of repentance.

I believe many of the protesters truly would like to shape a better America, that more perfect union, an America that treats all her citizens in reality with the heretofore only targeted respect and dignity her constitution promises.  Unfortunately, there is little evidence so far these protesters have any willingness to extend this basic human right to people of color in the rest of the world, so America would only be marginally better, but at least a first step will have been taken.

As for the rest of Trump's Mount Rushmore comments, the most offensive was this overblown paean to an imaginary America:

We declare that the United States of America is the most just and exceptional nation ever to exist on earth. We are proud of the fact that our country was founded on Judeo-Christian principles and we understand that these values have dramatically advanced the cause of peace and justice throughout the world.

The only thing exceptional about America is her hubris. . .

And Trump once again reveals himself to be a Christian charlatan when he blathers about that great oxymoron of religion: Judeo-Christian principles.

All in all, an ugly, crude collection of idiocies that should leave any sane American listener with the utmost feeling of hopelessness.
Posted by Person X at 4:04 PM No comments: