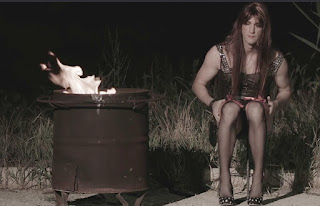 This Italian art film from the bottom of the Tubi barrel is laugh out loud bad. I mean, laugh out loud Ed Wood bad. In fact, it actually kinda reminds me of an Ed Wood film, Glen or Glenda, as both feature main characters who become involved in transvestism.

The Sculpture's threadbare plot concerns a solitary sculptor who desires the ascetic spiritual life above all. . .but not quite to the point yet where is he willing to give up his comfortable rented country estate. . .which creates a big problem for him. . .because he’s months behind on the rent. Yup, he’s a poor starving greaseball artist. And he is constantly badgered by the landlord(?) (Maybe it’s the landlord, or maybe it’s some dude who just loves to taunt broke artists, it’s never clear from the script who the guy is). We see the sculptor working on the same little section of one sculpture over and over and over again, take threatening calls from the landlord/bully and in-home visits from the landlord/bully’s effeminate lackey who gently asks for money while making his desire to butt fuck the sculptor quite obvious, and practicing yoga—that’s about the first third of the film, shot in second rate de Chirico-vision (motionless, flat spaces in bright sunshine or interior light). Then, for some reason, a high end escort rents a room in the same estate as the sculptor. The escort, who has man hands and a nose as big as a door stop, wanders around the estate in her lingerie while lamenting the hollowness of her sex trade lifestyle. Eventually she and the sculptor become acquainted and discover each has something to teach the other: the sculptor can teach the escort all about yoga and the other spiritual shit she’s been seeking, and the escort can teach the sculptor how to become a transvestite prostitute so he can earn rent money.

The Sculpture offers plenty of mostly non-full-frontal nudity and the most lethargic sodomies ever filmed. 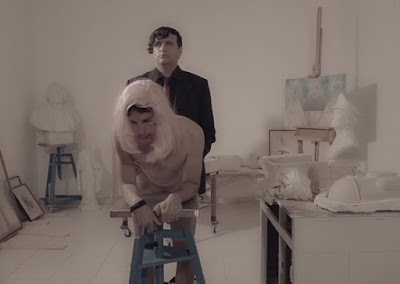 There’s very little dialogue. It’s mostly monotone voice-overs from the sculptor and the escort, droning on about their personal philosophies. Here’s a representative sample from each:

SCULPTOR: My statues are white, and do not have eyes to see. Sometimes I look at the world and decolorize it in fantasy. I imagine it faded or very desaturated. Sometimes I think of blood flowing, but I like to imagine it as clear as the water of a stream.