The Stink Of Freedom


Look how delighted this anti-Christ is with herself for mocking our Savior! So much fun! Living her dream! So worldly! So cool! So *in!* This New York ethnic with a filthy mouth and a filthy lifestyle. And the degenerate white *hostess,* so *edgy!*

Some would call this foul conversation *freedom.* This is what makes America the greatest nation on earth, the brainwashed freedomites exult! We can be as profane and pornographic as we want, that’s the strength of America, our license for public licentiousness! The world envies our freedom to wallow in the mire!

Satan, playing upon the perversion of the soul, found in the Americans his most fervent supporters of his doctrine that the shameless exhibition of filthiness is a virtue. What makes America great? Her unwavering support for the reprobates’ right to fart their stinks into everyone’s nose. That’s what this New York ethnic is doing with her *freedom* to slag Christ, she’s farting the putrid gas of her dead soul into our nostrils.

And listen to the audience whooping and hollering! [Who knowing the judgment of God, that they which commit such things are worthy of death, not only do the same, but have pleasure in them that do them.] They love the stink! It intoxicates them! Freedom, they cry! They’ll support any war if they are told it’s in defense of their freedom to inhale the stink.

I came across this video by accident, had no idea of the content. This garbage was aired a month-and-a-half ago—and I do not believe a single peep has been heard about the crude remark made against the Lord. That’s fine for most Americans, vessels of dishonor, but where are the Christians? The great blowhard Christians, who can’t shut their fat pie holes over faggot marriage and abortion? The great whining Christians, who cry every time a nativity scene is banned from public display? The great double-minded Christians, who are still pouting over the *persecution* of Carrie Prejean, the Miss Titty Flasher Christian Exhibitionist?

Christians entangled in the world, making asses of themselves trying to get the world to live according to their traditions.

The world is going to Hell, anyway, a little faggot marriage is just another log on the fire. . .

Christians and the world will always be at odds. This meddling of Christians in the world, therefore, is just wood, hay and stubble—it will be burned.

Christians have two responsibilities to the world: to preach the gospel of Jesus and to let the light of Christ shine through them as a witness.

So when some New York ethnic opens her sewer mouth and pollutes the name of the Lord with a filthy command, the Christian ought to reach out to the guttersnipe and say, young lady, allow me to expound more perfectly the way of this Christ you have so shamelessly insulted.

Has any Christian preached the gospel of Jesus to this sewer mouth?

Or have Christians been too busy with the *more important* commission of legislating the damned?

Not a word spoken for the gospel after the New York ethnic spoke filth about our Lord. . .Christians unprofitably redeeming their time with their worldly busy work.

Nevertheless I have somewhat against thee, because thou hast left thy first love. Remember therefore from whence thou art fallen, and repent, and do the first works; or else I will come unto thee quickly, and will remove thy candlestick out of his place, except thou repent.

As for the infidels who revel in America’s garbage culture, we must remember Westerners were barbarians before Christianity, and now in the post-Christian West, we see the inevitable return to vulgarity.
Posted by Person X at 12:19 PM 2 comments:

Revolutionary Road: I love this kind of movie. These domestic horror stories of man and wife put asunder. This one isn’t as good as, say, All Or Nothing, it lacks the bitter humor and cinder block squalor of that limey working class saga. And, at times, it’s hard to see past the star shine of DiCaprio (who still looks a bit baby-faced to play a grown-up) and Winslet to the ‘hopeless emptiness’ of their 1950s suburban existence. But look, mate, if you’ve been with the same person every single night, without a break, for eighteen years, you’d understand my morbid fondness for these *prison* flicks. My standard for judging these kinds of movies is quite simple: have me and the old lady experienced similar turmoil? Do I understand the misery of the beleaguered couple up on the screen? Well, we don’t look like Leo and Kate, but me and the old lady have had the same loud *discussions.*

Revolutionary Road has the feel of a Greek tragedy. DiCaprio’s and Winslet’s characters, Jack and April Wheeler, are perceived, both by themselves and those around them, as a *special* couple. . .talented, extraordinary people destined for grand adventures. Alas, the Wheelers are perfectly ordinary. Sheeple dressed in purple robes. And they are as mystified about what to do with their lives as their dullard neighbors, upon whom they look down.

With their marriage sinking in the quicksand of existential angst, the Wheelers dream of an escape to Paris. People are alive there, April says to Jack. Ha. April’s never been on the metro #13 line heading toward Saint-Denis around 17:00 and seen the grim faces of the good people of Paris, or she’d know they are just as defeated by life. No, the Wheelers’ problem isn’t environmental, it’s organic. The problem lies deep within their secular souls.

Equally flawed, the Wheelers are unable to help each other deal with the existential questions of life. In the end, they can only blame each other for becoming trapped in the soul-less suburban pseudo-life they imagined themselves above. Given the era the movie is set in, anteRoe v. Wade, the heaviest toll for the Wheelers’ hubris is exacted from April.

Our domestic tragedy’s chorus is provided by the character John (played with great exuberance by an actor named Michael Shannon), the institutionalized adult son of the Wheelers’ realtor and suburbia apologist, Helen (played by the aging cow Kathy Bates). Given the era the movie is set in, anteProzac, John’s depression is treated by electroshock and hospitalization. Granted a few weekend furloughs, Helen believes her son might be cheered by a little social intercourse with the magnificent Wheelers. But John soon discovers the essential mediocrity and timidity of Jack Wheeler, and the essential mediocrity and coldness of April Wheeler, and delivers to them his own electroshock therapy, in the form of his blistering commentary on the Wheelers’ hamartia.

Since I can’t remember what it was like to be unmarried, I don’t know if single people would *get* this movie. Hell, even childless couples (the Wheelers have two kids, who are rarely seen. . .the pressure of parenthood is mostly suggested, and not shown) probably wouldn’t get it. As I was married for ten years before the stork first came along, I now consider those days nothing but *playing house.* Married with children, now that’s the ninth circle of. . .well, er, let’s just say that’s the *real deal.* And watching movies like Revolutionary Road is the married penitents’ self-flagellation.
Posted by Person X at 9:29 AM 15 comments:

NY Daily News: 11 June 2009: When his ex-wife met him in the mid-1960s, James von Brunn was a wine swiller consumed by hatred. "[It] ate him alive like a cancer," said the 69-year-old woman, who did not want her name used. "It's all he would talk about. When I questioned him, he would get angry and abusive. He would talk about what the world would become in 20 or 30 years, that most of the country would be governed by black governors and that the Jewish people owned the media."

Listen, von Brunn’s war was no more absurd or pointless than the wars in Iraq and Afghanistan. The fear and hatred that drove von Brunn is the same as that which fuels America’s more popularly supported wars. The fear and hatred of the other. Same cancer, different symptom. He had his negro and Jewish bogeymen, while your average American right winger has his muslim bogeymen.

What will happen to our great country in 20 or 30 years if we don’t confront islamofacism now? they tremble.

Von Brunn is laughed at, considered a *lunatick,* while the *war on terror* crowd are considered perfectly rational. Huh?!?! 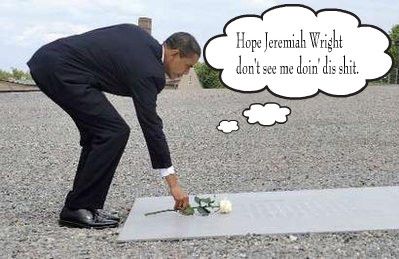 Thus the folly of Obama lecturing Ahmadinejad on the holocaust. After refusing to confront his own country’s crimes in Afghanistan, Iraq, Pakistan, Guantanamo and in all the third-party secret prisons, Obama points his finger at Ahmadinejad. The staggering hypocrisy! Some sand nigger needs to throw a shoe at this pompous ass!
Posted by Person X at 11:39 AM 10 comments: