The Tom And Jerry Priesthood 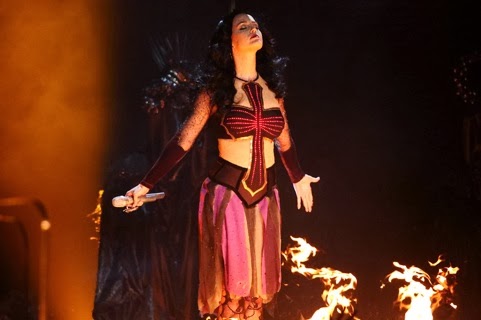 Breitbart.com, 27 January 2014:  Alabama quarterback A.J. McCarron, who is preparing for the NFL Draft, was watching the Grammys on Sunday and felt that the "really demonic" performances showed that "there is a lot of evil in the world." At the Grammys, Katy Perry dressed up as a witch and was "burned at the stake" in her act while gay couples were married to the song "Same Love." Though it was unclear what performance prompted the tweet, McCarron later re-tweeted a response in which one of his followers wrote, "I know right?  I can only imagine what Katy's Preacher Father is thinking."

I have seen a number of such comments from AmerICKa's *Christian* or *Religious* cognoscenti. . .

This is the level of discernment in AmerICKan Christendom. . .


Wickedness has to be on the cartoon level. . .it has to be so obvious, even a five year old (probably the developmental age of the Alabama quarterback) would get it. . .
AmerICKa has a Tom and Jerry priesthood. . .
On the one hand, we have Katy Perry slutting around in a witchy mumbo-jumbo number, which signals spiritual decline loud and clear to AmerICKan *Christians*. . .
On the other hand, AmerICKa's Tom and Jerry priesthood see nothing even vaguely sinister in the following signs of the times:
The Wedding That An American Drone Strike Turned Into A Funeral
The 85 Richest People In The World Have As Much Wealth As The 3.5 Billion Poorest
Walmart Rejected Proposal To Protect Bangladesh Factories Against Fire

Fukushima Radiation In U.S.: No One Is Measuring

70% Of Americans Are Narcotized

Cancer Drug Isn't For Indians, Only For Westerners Who Can Afford It

The real suffering and misery in the world don't seem to touch AmerICKan *Christians*. . .they prattle on about Obamacare and gay marriage and the Grammys, but remain silent about violence, poverty and global filth.

Though there are hundreds of thousands of churches in AmerICKa, there is no visible Christianity in AmerICKa. . .yes, God has His remnant, but His number is so small among the sick AmerICKan mass, their works are over-shadowed by the Satanic AmerICKan Way of Life. . .

The Alabama quarterback, worshipping at his flat screen altar, spies a vulgar belly dance, and tweets in alarm. . .he strains out the Katy gnat, and swallows the war dead, the sick and the poor. . .

When has any of the Tom and Jerry priesthood cried out about the drone dead, the sick and the poor?

When the Son of Man cometh, shall He find faith on the earth?
Posted by Person X at 10:01 PM 4 comments: