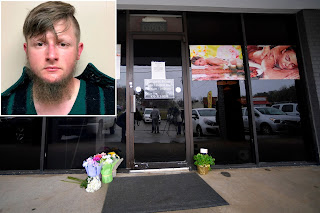 The old Stanford PhD/televangelist Gene Scott once said fornication is a piddling sin, and the typical Billy Graham-type pew warmers gasped.
The Georgia Asian sex worker massacre illustrates the finer point of Scott's maxim.
Robert Aaron Long, a self-proclaimed *sex addict* and a self-proclaimed *Christian,* was so overwhelmed by his flesh's reaction to the abundant female flesh daily life offered him, he went on a rampage, killing massage parlor sex workers.  He said he killed the good time girls because he wanted to save other poor souls from the same hellish temptations that bedeviled him.  This motivation doesn't stand much scrutiny, as obviously he removed nary a drop in our culture's bucket of sex workers and pornography.  Not one person Long wanted to save from a hand-job is now free of temptation or opportunity.  A truer explanation is that Long was so ashamed of his own fleshly weakness, he despised himself. . .yet lacking the selflessness to kill himself, he killed the sex workers as a blood sacrifice to atone for his sins.  Or he may have simply been unconsciously killing himself as he killed the massage girls he transferred his sins onto.
And yet the exact motive of Long's orgy of death is not relevant when compared to the greater issue: why was Long so disgusted by his own erections?
Robert Aaron Long grew up in something called Crabapple First Baptist Church.  We understand Long is responsible for killing the Asian parlor girls.  We understand whatever role Crabapple played in deforming Long's character, Long always had the ability to NOT kill.  So we don't suggest Crabapple is culpable in the massage parlor deathgasm.
There is an unforgivable sin.  But it is not homicide.
Long's family were faithful members of Crabapple First Baptist Church. . .and we are told the night before Long's sex mania climaxed in a stream of murder, Long was kicked out of his home by his parents because of his appetite for internet pornography.
Ask yourself the following:
Do you believe Long would have murdered those parlor girls if he hadn't been kicked out of his house?  If Long had been allowed to beat-off to whatever flavor of porn aroused him the most, and then wiped his flesh clean with a tissue while his spirit sunk in guilt and he cried I'll try to do better tomorrow, Lord, would those Asian rub-and-tuggers still be alive?
Crabapple First Baptist did not kill those women.  Long's parents did not kill those women.  Robert Aaron Long killed those women.
But there is an unforgivable sin.  And it is not homicide.
It is evident Long had a character deformation.  He was over-interested in sexuality.  This is not to say sexual sin does not have consequences.  Disease, broken families, acts of violence, abortion.  I have no doubt the average pew-warmer will think I am downplaying sins of the flesh.  But I find it troubling a 21-year-old was so distressed by his own flesh he would kill and kill and kill again.
It's not unreasonable to believe Long's doctrine of unforgivable sexuality came from his parents and Crabapple First Baptist.
I say this because Long's parents kicked him out of the house for beating off to internet porn.
Kicked out of the house for beating off to porn.

The scribes and Pharisees brought unto Him a woman taken in adultery; and when they had set her in the midst, they say unto Him, Master, this woman was taken in adultery, in the very act. Now Moses in the law commanded us, that such should be stoned: but what sayest Thou? This they said, tempting Him, that they might have to accuse Him. But Jesus stooped down, and with His finger wrote on the ground, as though He heard them not. So when they continued asking Him, He lifted up Himself, and said unto them, He that is without sin among you, let him first cast a stone at her. And again He stooped down, and wrote on the ground. And they which heard it, being convicted by their own conscience, went out one by one, beginning at the eldest, even unto the last: and Jesus was left alone, and the woman standing in the midst. When Jesus had lifted up Himself, and saw none but the woman, He said unto her, Woman, where are those thine accusers? hath no man condemned thee? She said, No man, Lord. And Jesus said unto her, Neither do I condemn thee: go, and sin no more.
If the parents of Robert Aaron Long aren't today convicted by their own conscience, their eternal souls may well be in more danger than their son's.
The pew-warmers may say, but his parents may have forgiven their son a hundred times for beating off to computer porn, but they finally reached the breaking point, and had to take more drastic action. 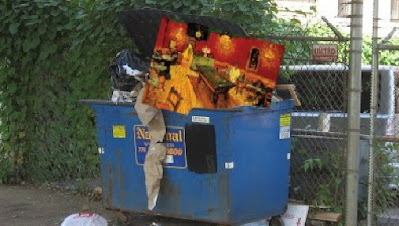 I was gonna start this by predicting in a hundred years you could buy Van Gogh's Night Cafe for a hundred bucks. . .then I stopped and thought about it for a minute.

First, there won't be a hundred bucks in a hundred years.  There will be a hundred Bitcoins or Pokecoins or whatever the cryptocurrency of the day is.  I don't know what cryptocurrency is.  Apparently you can somehow *mine* the shit on a computer by doing some really complicated equation or something.  I don't know how it works. It's money out of thin air, just like our current fiat dollar, so in that regard, the more things change, the more they stay the same.

But anyways. . .even if somebody had a hundred Bitcoins in a hundred years, they wouldn't buy a Van Gogh, because it will be worthless.

But anyways, this is the wave of the future because it follows two irreversible trends of humanity:

I'm not saying this to shit-talk *Beeple's* JPG.  There are some amusing images in it.  But Hell, let's be real, a software program did most of *Beeple's* heavy lifting. Hitler's watercolors have more authentic human artistic merit. . .

*Beeple's* little pixels are amusing to look at and can be carried on your phone so you can easily show it off shoving it in your friend's face.  And you won't have to drag ass to a museum and actually walk down long corridors to look at some picture you can't fucking understand.  Imagine the human fat-ass in a hundred years huffing and puffing through the Louvre, only to arrive dead-ass exhausted at the Mona Lisa and scratching its head wondering, why, it don't even look like an attractive tranny, even if you tried to Jap anime porn it up by putting a big cock on it.

No.  Humans will be too stupid, too fat.  Museums are dead.

Some fat-ass in a hundred years is gonna want to haul his lard butt off his gamer chair and try to lift a canvas with an image he can't comprehend to the wall and hang it on a nail?  When they can just pull out their smartphone (or blink their digi-eyelid) and look at this: 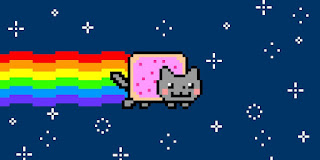 Yeah.  This *Nyan Cat* GIF just sold for 300 Ether, some other fucking kind of cryptocurrency which they call, apparently, *gas??*  Anyway, that's worth about six hundred thousand old fashioned dollars.
Human beings are in physical and mental decline.  Art is trending back to the level of sophistication last seen in cave drawings.
I mean really, is there that much difference from the *Nyan Cat* and this cave wall panther drawing from about four thousand years ago? 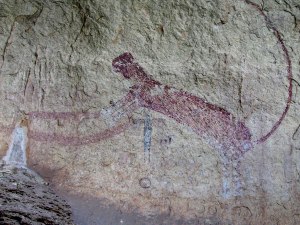