The Sin of Judge Roy Moore

16 November 2017: Two more women have come forward to accuse Roy Moore of sexual assault. They join a growing list of women who have alleged sexual misconduct by Moore, a former judge seeking to fill the Alabama Senate seat vacated by the US attorney general, Jeff Sessions. The controversy has roiled the Senate race one month before the state’s special election, with top Republicans in Washington calling on the embattled candidate to drop out of the race. The scandal began when the Washington Post reported that Leigh Corfman said that when she was 14 in 1979, Moore kissed and touched her and made her touch his crotch. Beverly Young Nelson then came forward to claim Moore physically attacked her in a car when she was 16, grabbing her breasts and trying to force her head down on to his crotch. A Washington Post report published late on Wednesday detailed the accounts of Becky Gray and Gena Richardson, who in the late 1970s worked at the same mall from which Moore was rumored to have been banned after local talk that he had been bothering young women there. Moore’s campaign did not address the new allegations, but has vehemently denied the claims made by his other accusers, and told TV talking head Sean Hannity 'I don't ever remember dating any girl without permission from her mother.'  Mr. Moore has long courted controversy, making incendiary comments about gays, Islam and race, and portraying himself as a defender of Christianity under siege in America.

Nobody has yet claimed Roy Moore forced his adult cock into unwilling jail-bait pussy, or pried open barely legal thighs to commit unsolicited cunnilingus--no, the allegations seem to top out at the level of *mall creeper.*  Moore was a thirty-something nerd loitering in the malls of Gadsden, Alabama, pestering junior high and high school girls.  In today's malls, with today's technologies, Moore probably would have been snatching up-skirt shots of teen snatch with a cell phone, but back in his day, Moore had to actually try to *sweet talk* Dixie Lolitas into car rides and movie dates where he could then fumble his way through his awkward molestations:

From The Life and Times of Judge Roy Moore:
Roy picked her up around the corner from her house in Gadsden, drove her about 30 minutes to his home in the woods, told her how pretty she was and kissed her. On a second visit, she says, he took off her shirt and pants and removed his clothes. He touched her over her bra and underpants, she says, and guided her hand to touch him over his underwear.

Moore denies these amateurish sex crimes, which probably ended with him shifting uncomfortably in his own sticky underpants, but in these cases of *they said/he said,* the single biggest proof of Moore's guilt may be his own marriage certificate. At age 38, Moore married a 24 year old, thus offering concrete evidence the thirty-something Moore did, indeed, have a taste for the young stuff.

Not to dismiss the anguish the mall creeper caused his victims, but in the Grand Cosmic Scheme, Moore has a bigger sin choking his soul. . .

Moore is, at best, a self-proclaimed Christian, and views his political ministry as sanctioned by God. This is why Moore will not confess his mall creeping ways. Moore sees himself as the victim, persecuted as Jesus said His followers would.

Sin is missing the mark God sets for us. And Roy Moore as self-proclaimed Christian has missed the mark much more badly in presenting the gospel of Jesus Christ than he ever did when groping at a little girl's panties.

Jesus said "My Kingdom is not of this world." The ways of the Kingdom and the ways of the world are in opposition. Jesus came to call people out of the world and into His Kingdom, but Roy Moore tries to drag Jesus from the Kingdom into the world. His political platform is nothing but the heresy of dominionism. In fact, Moore is the kind of bewitcher Paul warns about in Galatians. Roy Moore, dragging his 10 Commandments wherever he goes, would put the stony heart of the law back into Christianity and have men justified by the law rather than the faith of Christ. And that's a damnable heresy:

When we look upon Roy Moore we see one who loves the praise of man more than the praise of God. Moore uses his false doctrine to seduce brain-dead Christians into giving him a seat of authority in the world.

Roy Moore can't do a God damn thing for the Kingdom from the U.S. Senate. . .anybody who believes Christianity can be advanced through legislation is a fool, and doesn't know the first thing about Christian doctrine. The Law that Roy Moore drags around was set aside by Jesus and replaced by the Sermon on the Mount. The Law that Roy Moore drags around was a dead stone that could be circumvented by the wicked midrash halacha. Indeed, when Roy Moore acquits himself of girl molesting, he sounds like nothing so much as a talmudic rabbi:

I don't remember ever dating any girl without the permission of her mother. . .

So even if Roy Moore did finger-fuck a fourteen-year-old or two, he asked mom first, so. . .it's all good.

But that kind of legal pussy hair-splitting can't be excused if one follows the Sermon on the Mount, which convicts man to his innermost heart:

Ye have heard that it was said by them of old time, Thou shalt not commit adultery: but I say unto you, That whosoever looketh on a woman to lust after her hath committed adultery with her already in his heart.

That's why Jesus didn't come to save Israel from Rome, and it's why Jesus doesn't give a good God damn about saving the USA from whatever Roy Moore thinks it needs saving from. Jesus' mission, and it remains the church's mission, is to call repentant sinners into His Kingdom.

It is not the church's mission to call Jesus Law-Giver into the World, for if righteousness comes by the Law, then Jesus died for nothing.

Is Roy Moore a con man using his false gospel to fleece baby Christians, or just an idiot self-proclaimed Christian so blinded by dominionism he's lost his way? Unknown. But what is known is that Moore's Senate campaign and his desire to call Christ into the world is an act of vanity that should scandalize Christians, and the fact that no church leader has called for Moore to be delivered to Satan for the destruction of his flesh tells us the church is as pathetic in its mission as Moore was in his finger-fucking.
Posted by Person X at 3:48 AM No comments: 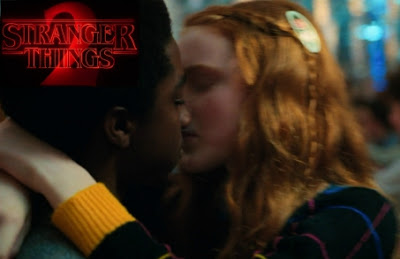 Stranger Things, Season 2: There's such a huge drop-off from Season 1 to Season 2, I now wonder if Season 1 was actually any good?  Maybe if I went back and watched Season 1 again, I wouldn't overlook the things that bothered me about it (Winona Ryder's screeching acting, the mostly ugly cast, including the repulsively anorexic chick who played Nancy, the deliberately overly abstruse story meant to hide the fact even the writers didn't know what the Hell any of it meant)?  Was Season 1 really a decent spooky paranoid cosmic mystery unraveled by a mostly-amusing gang of nerdy D&D kids and loser adults?

The main problem with Season 2?  There is no mystery for the nerdy kids/loser adults/ugly cast to figure out, it's the Upside Down Redux, and since we already know, more-or-less, all we're ever gonna know about the Upside Down, the writers have nine hours to fill before Eleven concentrates real hard for the two nostril nose bleed required to close the dimensional gate between the UD and Hawkins, Indiana.

With no mystery to tease, the writers try to fill the episodes with humor (the negro nerdy boy Lucas now has a wise-cracking little sister, think Wanda Sykes as an 8-year-old), new characters (a Jewy-iooking gOOfball conspiracy theorist, a Jewy-looking new Hawkins Lab doctor, played by a bloated-almost-beyond-recognition [if, like me, you haven't seen him since Aliens] Paul Reiser, a fat schlub boyfriend for Winona Ryder and Billy and Max, two angry new-kids-on-the-block step siblings from an über-dysfunctional family {in fact, the 'what's with this family?' question is the only real mystery of ST2}), a lame subplot (Eleven finds Eight, another Hawkins Lab experiment girl, and joins her laughably un-punk punk gang just long enough to learn about hair gel and eye shadow before realizing she's more Jack-and-Diane than Sid-and-Nancy), lame product placement (Three Musketeers and more of Season One's Eggos) and sex, lots of sex (though, thankfully, given the ugly cast, it's off-screen sex).

And some of the sex is a little creepy.  In one uncomfortable scene, the Jewy-looking conspiracy theorist seems more Harvey Weinstein than Sherman Skolnick as he practically demands that anorexic Nancy and pasty-faced Jonathan fuck right in front of him.  And there's a troubling stink of pedophilia to the Hopper - Eleven relationship, as the unkempt cop baits Eleven with her cherished Eggos, then locks her away in a cabin in the woods to watch TV all day, before returning at night to play an unhealthy-looking game of house with her.

Almost as disturbing is the interracial tween romance between negro Lucas and new-girl-on-the-block Max.  1984 redneck Indiana hardly seems a breeding ground for tween race mixing, so one must wonder why the writers decided to shove this mud couple in the audience's face?  In fact, one of the charms of Season 1, in our hyper-sexualized American culture, was how unsexualized the nerdy D&D kids were.  Now in Season 2, they all seem to have pussy fever (except the terminally faggy Will, who spends most of the season being raped in an Exorcist-like possession by the Upside Down's Dark Shadow. . .speaking of which, after 13 seasons of Supernatural's much-copied demon's black smoke jet-streaming in and out of the mouths of the possessed, can't horror shows and movies find a new way to depict possession?).  And Mike is so blue-balled over Eleven, he acts like a girl on the rag as he brattily wet dreams his way through the 7 or 8 episodes until they are reunited.

No mystery, unpleasant character development, ill-fitting subplots: unforunately, Stranger Things Season 2 is an Upside Down version of Season 1.
Posted by Person X at 2:26 AM No comments: