It's A God Damned Shame 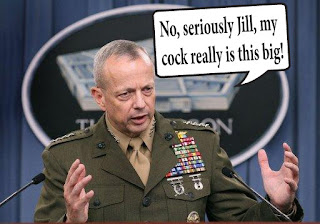 Washington Post, 13 November 2012: The FBI probe into the sex scandal that prompted CIA Director David Petraeus to resign has expanded to ensnare Gen. John R. Allen, the commander of U.S. and NATO troops in Afghanistan, the Pentagon announced early Tuesday.  According to a senior U.S. defense official, the FBI has uncovered between 20,000 and 30,000 pages of documents — most of them e-mails — that contain “potentially inappropriate” communication between Allen and Jill Kelley, the 37-year-old Tampa woman whose report of harassment by a person who turned out to be Petraeus’s mistress ultimately led to Petraeus's downfall.

Ha ha ha. . .another *hero,* another of AmerICKa's Warrior Priests, another of those who are never questioned, never criticized, never judged, a commander of troops whom we must always support, is shown to be just another swinging dick.

And you wonder why the war in Afghanistan has dragged on for nearly a dozen years?

Apparently the Command Staff isn't quite as dedicated as the Media Wing of AmerICKa's Military Media Complex would have the civilian sheeple believe.

One can only conclude General Allen spent a little too much time chasing tail instead of chasing the Taliban. . .

AmerICKans idolize their military, they revere their Generals, hold them in childish awe. . .they are considered *Suffering Servants,* the best and the  brightest, who have made the *ultimate sacrifice* for their country.  In reality, they are bored bureaucrats, killing the tedious hours at work by sexting.  In short, instead of being a cut above, they are cut from the same cheap cloth as you and me and the nose-picker who runs the corner convenience store.  Regular slobs, not particularly dedicated to anything but hoping for a hot piece of ass every now and then to make the dull days a little more tolerable.

There is really nothing noteworthy in the General Allen story. . .just another midlife crisis. . .and a rather timid little one, at that.

But it's worth commenting on for the shame it sheds on AmerICKa. . .for it is a God damned shame these 4 star paper shufflers are only made to squirm over some penny ante adulteries.  How much blood these 4 star bean counters have on their hands!  And for that they are made deities.  In AmerICKa the unpardonable sin is blasphemy against the military.  The troops must be supported, that is the first and greatest commandment.  The Generals kill thousands, the Generals cripple and blind thousands of children, regularly based on bogus or flimsy *intelligence,* for there's not enough time to properly investigate military targets because the General is bored and wants to sext a Florida milf.  Blood is spilled casually and thoughtlessly, and for this the Generals are worshipped by a grateful nation.

It ought to be an ashamed nation.  We ought to be ashamed by our military.  Especially for a nation in which so many claim it Christian.  Years of senseless wars featuring the mendaciously labeled *collateral damage* provoke only adoration from a *grateful nation.*  Sick.

Petraeus and Allen are feted for Satanic violence by the grateful nation. . .they chase skirt and a few of the hardcore Pharisees in the AmerICKan Sanhedrin make them confess their most piddling sin.

AmerICKa is a nation of the blind, straining gnats, swallowing camels.  AmerICKa the beautiful, the sheeple boast, but within full of dead men's bones and all uncleanness.  The meaningless investigations into these irrelevant scandals are meant to make the military outwardly righteous, while within it remains full of hypocrisy and iniquity.

Ha ha ha. . .look at all the shit-eaters of AmerICKa, feasting on the twin turds of Benghazi and Petraeus.
"There's something more than meets the eye," the shit-eaters say as they examine the crap they are about to swallow. . .

While licking the feces from their fingers, they spout cant and bombast about *conspiracy* or a *cover-up*. . .

But what possible conspiracy or cover-up could there be?

Obama is trying to hide something, and Petraeus knew about it.

This thin reasoning is expressed, for example, in the dramatic-but-empty *tweet* of Laura Ingraham:

COINCIDENCE?!  Petraeus is set to testify NEXT week at a closed door session on Capitol Hill abt Benghazi.  Did BHO push him out?  This stinks!

The only thing pretty talking air head Ingraham got right is that it stinks.  But it stinks not because of some vaporous conspiracy, but because Benghazi and Petraeus naturally stink. . .they are the natural waste products of the AmerICKan Beast System.

Benghazi is the shit that naturally results from AmerICKa's deranged War Machine, and Petraeus is the shit that results whenever some phony AmerICKan hero is exposed for the regular swinging dick he is.

Of the two, Petraeus is the more foul-smelling, for he embodies the idol worship of the War Machine.  Petraeus is a white Colin Powell, mediocre at everything except self-promotion (how proper that he is undone from fucking the cunt propagandist who authored his lie-ography. . .which is about as close as you can come to fucking yourself).

How many millions of dumb AmerICKans believe this nerd is a hero!

He leaves ruin in his wake. . .which, if one were a secular AmerICKan would be fine, if AmerICKa could only just profit from the ruin. . .but the ruin has bankrupted the AmerICKan economy.  Yet the AmerICKan infatuation with Military, with Violence (which are, of course, both anti-Christ) is so complete, all sins of the bumbling Warrior Priests are excused and forgiven, as shown in this pathetic, groveling apology for General Petraeus:

Petraeus Resignation May Have Been A Bit Too Perfectly Timed

which concludes with this amazingly blind and nauseating stool sample of hero worship:

One thing is for sure, there doesn't seem to be a single person, other than Petraeus's wife and possibly Broadwell's husband, who holds this against him. Despite this ungraceful exit, General Petraeus is still going down in history as an American hero and one of the greatest generals in our nation's history. He completely rewrote the book on how our country runs wars and is one of the few people who truly changed the world.

Ha ha ha. . .look at all the shit-eaters of AmerICKa!!

For one last laugh, go here and read all the numerous glowing reviews shat out by various *luminaries* from Television, Literature and Academia for Temple Prostitute Paula Broadwell's Petraeus lie-ography.

Now that Mitt Romney has lost, will Billy Graham rush to put Mormonism back on his web site's list of cults, hoping the Lord Jesus Christ was napping in October?

The *Protestant Pope* prayed for Romney a couple weeks ago, but apparently his prayer got lost somewhere between here and the Throne of God. . .

That's the only thing that interested me in this election, how that old counterfeit Billy Graham had to butt in and act like he was some kind of Samuel, anointing a king.  What a pompous ass!

Hey, Graham, nobody in Heaven gives a shit about all them pictures of you butt-sniffing all them presidents. . .

No man that warreth entangleth himself with the affairs of this life; that he may please him who hath chosen him to be a soldier.