Cops Kill Another One. . .And Endanger A Child!!! 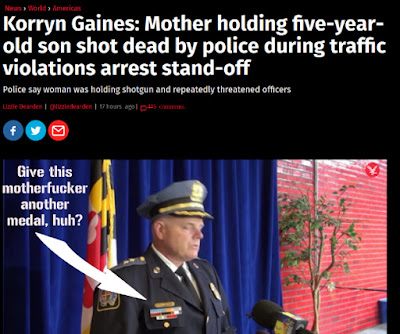 3 August 2016: Police outside the US city of Baltimore shot and killed a woman holed up with a five-year-old boy. Korryn Gaines, 23, was armed with a shotgun and due to be arrested for an outstanding traffic violation at the time. Police said she refused to co-operate and opened fire when they tried to enter her apartment. The boy, who may have been her son, was also shot during the exchange, but is in a stable condition in hospital.

Listen. . .this isn't really that fucking complicated.  It isn't too hard to figure out.  It's a no-brainer, so even the mentally challenged AmerICKan po-lice should be able to handle it correctly:

There is NO pressing need to arrest a Baltimore hairdresser with a misdemeanor resisting/interfering with police warrant that can possibly justify endangering a five year old kid.
Sorry, the world can go on one more day without having this black chick show up in court over a nickel-and-dime traffic beef.

You telling me the Baltimore po-lice are so fucking stupid they can't understand when they see a crazy hothead black chick with a kid during a firearms stand-off that the best fucking solution is to retreat?  Leave, get the fuck out of there before the kid gets hurt. I understand the po-lice love to shoot black folk, but why not shoot the crazy bitch later, when the kid ain't in the fucking line of fire?  You don't have to be a rocket scientist to figure this shit out.

The God damn courts are choked with black people held on bullshit hassles. . .what possible difference could it have made if this chick went to court today, tomorrow, next week, next month, never?

To not admit the RIGHT course of action was for the Baltimore po-lice to leave as soon as they knew a child was endangered, and to try to arrest this woman on her bullshit warrant at a later point in time and space, when no children would be at risk, to not admit this, you have to be dishonest to your core. . .or retarded.

No fucking urgent need to have one more colored person in court. . .

Policing in AmerICKa is a menace to public safety. . .sorry. . .dumb asses can clap and cheer for Trump's Law & Order, but this is what you are really cheering for: another dead citizen, and a five year old kid with a bullet wound.  God bless AmerICKa?  It ain't gonna happen.
Posted by Person X at 2:23 AM No comments: