The Industry Of The Future 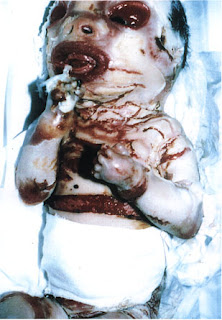 Aging US Reactors Were Designed To Last Only 40 Years

Al Qaeda doesn't need to smuggle in any dirty bombs. . .AmerICKa has bOOby-trapped itself with scores of them. . .the handwriting is on the wall. . .it's only a matter of time. . .or nature.

Circus sideshows are the Industry of the Future. . .a new generation of freaks is about to be born.
Posted by Person X at 1:11 PM 1 comment:

Scanning the headlines on Drudge Report today, it's déjà vu all over again:

Are you SHITTING me, I thought? Not this, again!

How many times have I read this SAME EXACT STORY in the last five years???

How many times have the sheeple been warned/frightened the muslim bogeymen are about to go nuclear? That the islam bomb is *just around the corner?*

But Iran hasn’t built the bomb, and USrael hasn’t attacked. . .

So I wonder, what is the point of the Military Media Complex’ long-running Iran nuclear bomb propaganda campaign?

Is it possible, after twenty-five years of pushing the same feary tale, USrael doesn’t really care if Iran goes nuclear?

In fact, the only reasonable conclusion one can draw is USrael actually WANTS Iran to go nuclear. . .

And if the Iranians actually manage to cobble together a nuclear bomb or two, so much the better!! Imagine the terror the Military Media Complex will conjure should the day ever arrive when Iran (or some other member of the so-called *Middle East*) announces it has the bomb.

With such a *real* threat, the Military Media Complex will validate its long demonization of the other, and will be able to perpetually justify all its military adventurism. The so-called *West* will humbly again accept the lead of USrael, and will never again be *caught with its guard down.* The Military Media Complex will never be in danger of being dismantled, for an islam bomb will throw the shadow of *holocaust* over the West. . .and the terrified sheeple will give their very last pennies for *defense.*

If the Iranian leadership possessed any wisdom, they would pull the Persian rug out from under USrael by stating their intention, in light of the Japanese nuclear catastrophe, to abandon their nuclear energy program, and then invite Western inspectors to verify the process. Thus, the Iranians could write a surprise ending to one of the Military Media Complex’ most widely read stories from its anthology of propaganda. The other repents? Hard to scare anybody with that ending. . .

But the Iranians will not do this, for they are unknowing accomplices to their own slander. . .for the sinister hand behind the New Order of the Ages controls all the governments of the world, and all are patsies, and all are in the process of being brought together to that final line in the sand. . .

A couple other totally unrelated *things:*

Speaking of Ms. Portman, she delivers a surprisingly strong performance. Portman has been the most wooden of actresses since her enchanting debut in The Professional, but here she manages to seem human playing Nina, a sheltered, repressed, emotionally retarded adult girl. . .in other words, Natalie Portman plays herself in Black Swan (or the self she has appeared to be in all her movies since The Professional).

As for Black Swan the movie, it can be briefly and accurately described as the chick flick version of Fight Club, with Natalie Portman playing the Tyler Durden of prima ballerinas.

I also saw the critically acclaimed The Ghost Writer, made by the celebrated child molester Roman Polanski. . .and it was even more disappointing than Black Swan.

The Ghost Writer is an empty suit of a movie, with its dumb storyline pulled from the headlines of the left wing UK papers. The bland movie *star* Ewan McGregor plays a ghost writer hired to punch up the memoirs of a Tony Blair-like former Prime Minister in the middle of a war crimes inquiry. The movie’s big twist is the ghost writer discovers the Tony Blair-like character isn’t really such a bad fellow, he’s just a chump who has been manipulated by his wife, a Cherie Blair changeling in service of the CIA.

The Ghost Writer is a stupid, shallow flick, with its idiotic plot literally driven by a BMW’s GPS system. I have no idea why so many critics would praise this garbage. . .

Lastly, there is the long-anticipated demise of Jim Tressel, who needlessly and carelessly cheated during his glorious ten year run as the head football coach at Ohio State.

There were countless accusations over the years of shady dealings between Ohio State *booster* businessmen and Buckeye football players, but the NCAA always looked the other way. Mr. Tressel was finally undone by one small, dumb lie. Tressel had become so accustomed to having his dirt swept under the rug by the Ohio State administration, he no longer even bothered with appearances. . .and when his lie became public, he couldn’t even make the insincere-but-de rigeuer- half-assed apology that would have likely saved him.

The ironic thing is Tressel, I believe, would have had the exact same record without the cheating. I believe Tressel cheated for the same reason obsessive-compulsives wash their hands dozens of times--just to be sure. I don't think any of Tressel's dirty players would have left Ohio State had he asked them to refrain from all the free car deals, bogus summer jobs, autograph fees, etc. Tressel tolerated all the dirty deals, even though rationally he should have known the players wouldn't have left OSU, just to be sure he would win. . .

But that is neither here, nor there. I comment on Tressel because he is a self-proclaimed *Christian,* and I find him to be an outstanding representative of the contemporary AmerICKan church.

If Tressel is a Christian, all his works are wood, hay and stubble. Tressel himself will be saved (if he is a Christian), yet so as by fire. . .

Tressel, a Christian who practices the way of the world, is therefore a perfect proof of the Apostle Paul’s maxim:

Tressel, if he is a Christian, is, at best, a severely compromised Christian, a worldly Christian, and thus a fitting figurehead for the kind of Christian our Lord Jesus Christ would see two thousand years down the road when He asked:

Nevertheless when the Son of man cometh, shall He find faith on the earth?
Posted by Person X at 11:39 PM 2 comments: