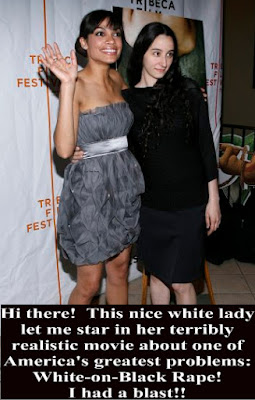 Descent: Talia Lugacy, the writer/director of this inept rape drama, doesn’t seem to like white men. This feeble-minded, racially misguided AmerICKan attempt at shock cinema depicts white men as racist, latent homosexual, insecure, riddled with deep feelings of inferiority and with longings to be dominated and humiliated. . .in other words, all AmerICKan white men want to be Kelsey Grammar. . .ha ha ha. But anyway, here’s the story:

Maya (name probably reflects some embarrassing Lugacy tribute to one of her probable *inspirations:* the buffoonish *poet* Maya Angelou) is a pretty young AfrICKan-AmerICKan college girl. . .she’s the bookworm type. . .it seems important to Lugacy the audience view the colored Maya as *smart*. . .it may be, considering the abysmally condescending course this movie will take, that Lugacy is one of those very hip, clued-in New Yorkers, who drinks fancy coffee beverages with an assortment of mud people and therefore marvels at her own tolerance and thus wants to enlighten the rest of AmerICKa, which certain of the snobbish inhabitants of the Big Apple believe resembles the hills of Tennessee, circa 1867. . .

Anyway, Maya is AfrICKan-AmerICKan, pretty and smart. . .and very wary around men. . .we learn Maya is still hurting from the break-up of a recent relationship. . .so Maya is VERY GUARDED, not wanting to get burned again. . .since she is so smart, she can easily see through all the shallow men who hound her. . .then at a party, Maya meets Jared. . .a white college football player. . .he wouldn’t seem to be exactly bookworm Maya’s type. . .but Jared really works on her, giving her a lot of what Lugacy must think to be cunning romantic sophistry, but what the audience (even the boobs out in the sticks west of New York) will realize are just lame come-ons. . .but, of course, Maya falls under Jared’s weak spell. . .she goes back to his apartment, they kiss for a bit, then Jared starts to fondle her breasts and Maya says “no,” “stop,” and all that good date rape stuff. . .but Jared, who had to work real hard to convince Maya that he was worthy of her, will not take “no” for an answer. . .he proceeds to rape the poor girl, all the while hurling mean racial epithets at her (such as nigger, maggot and baboon). . .

Well, poor Maya is so traumatized by being the victim of not only rape, but also a hate crime, she descends into a near zombie-like state. . .she’s so damaged, she can’t even report the crime to the police. . .violated nearly to the point of inertia, Maya spends her summer vacation wandering New York in a daze. . .though she somehow manages to land a job at a trendy fashion boutique, apparently because she has great skill at folding sweaters and her near-catatonia provides lots of laughs for the rest of the staff. . .anyway, in her dazed-and-confused state, she drifts into one of New York’s many hip underground music clubs, where peoples of all races come together to degrade themselves. . .Lugacy’s club scene looks, frankly, like a very cheap imitation of Gaspar Noè’s The Rectum in Irréversible. . .at the club, Maya meets bartender/DJ/philosopher Adrian, a blatino guru for all New York’s damaged girls. . .Adrian mumbles some kind of incredibly crazy, mixed-up psycho-sexual babble that would seem ridiculous to even Mike Tyson, but SOMEHOW it strikes a chord with Maya. . .it EMPOWERS her in some vague way. . .

But not only is Adrian a guru for the lost girls of NYC, he is also the Beast Master for all the pathetic white boys who crave to be dominated and humiliated by a MAN OF COLOR. . .Descent *treats* the audience to the spectacle of a white frat boy being mocked by Adrian and then submitting to Adrian’s orders to take a drag off his cigarette, which he is holding between the toes of his feet. . .the inferiority-complexed white boy dutifully submits. . .when Maya asks him why he would do that, the white boy stupidly stammers an *aw shucks it weren’t nothing* answer. . .Maya then tells the white boy he can kiss her feet, and he leaps at the chance, clearly enjoying the opportunity to once again be submissive to a PERSON OF COLOR. . .

After her eventful summer vacation, Maya returns to college and just happens to land a teacher’s assistant gig for a class that her rapist Jared attends. . .Maya catches Jared cheating on a test. . .I guess this is meant to tell us that Jared is very very stupid, for only a very very stupid person would do what Jared does next. . .Maya confronts Jared about his cheating, invites him to her apartment, tells him how much she has missed him, and that she wants to be with him again. . .she asks him to strip. . .Jared stands nude before her, a little uncomfortable, a little unsure of himself. . .but this dumb white boy, who raped this girl a few months earlier and called her a baboon, is sure about one thing: Maya harbors no ill will toward him. . .hey, they are just playing a kinky sex game that will be lots and lots of fun! Dumb white boy Jared never protests as Maya leads him to a bed and handcuffs him. . .let’s see, Jared raped this girl last semester, called her a baboon and nigger, and he allows himself to be handcuffed to a bed? He never considers for even the briefest moment Maya might still be a little upset over the rape?

In an interesting cinematic aside, we learn that sodomy is thirsty business, for in the middle of his long cornholing session, Adrian asks Maya for some water! I laughed out loud at that. . .he’s like some parched biker at the Tour de France, desperate to take a swig from a plastic water bottle. . .that’s art, for you. . .the thirsty sodomite! Well, Maya never gives him any water. . .she’s too busy crying. . .yes, as the torture of her rapist drags on, Maya seems less and less enthusiastic. . .is it because she’s sad her revenge leaves her feeling so empty? An almost biblical feeling that one cannot overcome evil with evil? Or is she sad because Jared seems to enjoy being Adrian’s bitch? Maybe she’s jealous? It would have been great if the lamebrain Lugacy had ended this horseshit movie with Maya crying “it wasn’t supposed to end this way!” as Jared and Adrian strode off arm-in-arm, leaving her alone in her apartment, with nothing to do but grade some papers and watch The Accused on dvd for the tenth time. . .

This is a dumb, dismal movie, devoid of any psychological realism. . .even something as simple as revenge is beyond the grasp of the moron who made this garbage (I was going to say “pretentious garbage,” but it is so badly constructed, it is impossible to determine what, if anything, this thing claims to be, other than what it is: two interracial rape fantasies sandwiched around an incoherent *coming of rage* story). I Spit On Your Grave ÷ NYU Film School.
Posted by Person X at 5:48 PM