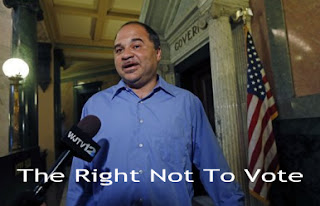 Daily Caller, 5 August 2015: The truck driver who won Mississippi’s Democratic primary Tuesday with more than 146,000 votes admitted that he didn’t vote in the election because he “had to do a lot of stuff and just lost track of time.” Robert Gray said that he didn’t campaign much, and he didn’t report spending any money on his campaign. “Actually, it wasn’t too much campaigning,” Gray said. “It was a couple of events, but even though my opponents did a lot of hard campaigning they only reached a few people. You know, it was just people showing up, voting and, I guess random, voting.”

“They didn’t know me from anybody else,” Gray told the Associated Press.

“I was in Jackson and had to do a lot of stuff and just lost track of time, to tell you the truth,” Gray said when asked about whether he voted.

Gray does not appear to have a significant social media presence, and local reporters are still working on getting a photograph of the man. MPB also reports that the house that Gray used on his election paperwork “appears to be abandoned.”

On the one hand, you have to have the mega-rich back you if you want to run for President. . .the sheeple still have an emotional attachment to their Figurehead.

But now even state governor is a meaningless office to the great unwashed sheeple. Governor?  Who gives a shit, just pick a name at random, and what fucking difference would it make, anyway?  So you could spend ten million dollars *spreading your message,* but why bother?  Nobody's paying attention.  You don't need a fucking dime to be governor, just a regular-sounding American name. . .

This is democracy in action in 21st century AmerICKa. . .

The democracy of disinterest and indifference. . .

"You know, it was just people showing up, voting and, I guess random, voting.” He also said the 146,163 people who voted for him had not idea who he was. “They didn’t know me from anybody else.”

Ha ha ha. . .KNOWING WHO YOU ARE VOTING FOR NO LONGER MATTERS in AmerICKan *democracy!*

Ha ha ha. . .and this *democracy* is our *gift* to the rest of the world (a gift most often forced upon the others by our military). . .

Ha ha ha. . .now that we have reached the 'pick a name, any name' stage, there is only one last barrier to total voter apathy in our *vibrant democracy:* not even bothering to vote, which is what our truck driver nominee did, proving he really is the man to lead Mississippi into the future. . .

And perhaps we are already there. . .for consider: Mississippi has approximately 2 million voting age residents. . .in the republican and democrat gubernatorial primaries, approximately 600,000 votes were cast, so we have only a 30% voter turnout. . .and at least one-fourth (and probably much much more) of those 600,000 votes were cast for an UNKNOWN person.  We have to ask, is anybody then even truly *voting?* A large percentage of voters are not making a conscious decision, they are just making random scratch marks next to a name. . .are not these, therefore, ZOMBIE voters?  Aren't they just voting out of some vague instinct, back from a time when democracy was alive and well? AmerICKans now *vote* like the zombies *shopped* in George Romero's Dawn Of The Dead:

[I wonder if it will matter when white Mississippians find out they voted for a colored boy?]
Posted by Person X at 10:44 PM