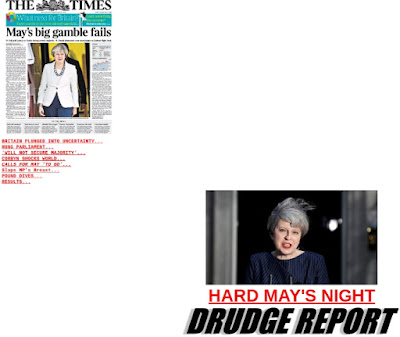 Predictably, Media report *shock* at the election results in Britain. Jeremy Corbyn, who Media mercilessly mocked and slandered for the last two years, managed an almost-draw with establishment figurehead/ugly cunt Theresa May in May's stupidly called for *snap elections.*

Investing half a trillion pounds in rebuilding Britain's industrial infrastructure, building millions of homes, making universities free, and re-nationalizing the country's railways, utilities and postal service. He proposed to pay for all that by hiking corporate tax rates from 17 to 26 percent and imposing taxes on real estate and incomes over $100,000 a year.

The Western Media, hardly free, controlled by fewer people than make up a National Football League team, and a propaganda distributor for the ultra-rich, always mock even these most modest economic proposals to just slightly lessen the burden of the poor. Older whites always fall for it, for they're still under the illusion/delusion they're *middle-class,* but, increasingly, Western white youth see through the propaganda and realize they are no better off than most niggers. . .hence they gravitate to *populists* like Corbyn and Sanders, even though Jez and Bern are old enough to be their grandpa.