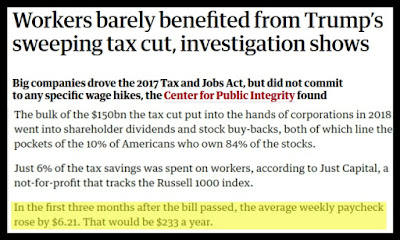 This is why increasing numbers of Americans, particularly young Americans, don't wet themselves when FOX News calls democrats *socialists.*

Who gives a shit about *socialism* if Absolute Capitalism is only good for $6.21 a week?

Hey, Trump, thanks for the 15 cents an hour raise!!

You have to feel bad for all the brainwashed working class Americans who thought, and still think, Trump *fights* for them.

Here's who Trump fights for (besides Israel):

Trump's tax bill, with its 21% corporate tax rate, was first and foremost a gift to multinationals. They had wanted cuts in the corporate tax rate for foreign and domestic profits for decades. Everything else flowed from that: the tax cuts for smaller businesses known as “pass-throughs”, which had been their holy grail, and the cuts for individuals, which were needed to sell the bill to voters.

The second: all the posturing about real “reform” of the tax code and “revenue neutrality” for the legislation was meaningless. In fact, the bill had to create a $1.5tn 10-year deficit to pay for its generous tax cuts. Without the deficit, the corporate rate of 21% could never have been achieved and, more important, the bill could not have passed at all.

The third was that the bill as passed was hugely problematic. It contained egregious mistakes, created massive new loopholes and opened the door to new forms of tax avoidance. Thirteen tax law professors from around the country, in a 68-page study, blasted its “rushed and secretive process” that resulted, they said, “in deeply flawed legislation."

HaHa!  Trump fights for *multinationals,* not cashiers, truck drivers, janitors and all the rest of the *deplorables* who think he's making America great again.

I'll never understand why so many millions of white working class American males vote republican.  Are they so afraid of colored people, they'll be slaves for the 1% just for the illusion walls are coming to keep them safe?

There's never been a bigger bunch of suckers than white working class males, who consistently bend over and take it in the ass from people who wouldn't nod at them if they ever in a one-in-a-million chance happened to cross paths on the same street.  The white working class aren't even house niggers, they don't ever see their Masters!  They live in separate worlds. . .and the working class world is getting more and more run-down. . .pot holes, dirty water, crap schools, shitty health care. . .but white males don't care, just so long as republicans nurse their fear of colored people.

But the hand-writing is on the wall. . .young people just don't care about the same shit as the white working class. . .the 1% will loot the last pennies they can from the poor, and then the AOCs and the Omars will inherit the earth, and the Euro-style welfare state will be imported to America.  I suppose we'll have to endure more and more domestic terrorism from deranged crybaby vets who thought they were killing colored foreigners to protect the American Way of Life (like Isaiah Peoples) during the change-over, but, as Timothy McVeigh once quoted Thomas Jefferson:

The tree of liberty must be refreshed from time to time with the blood of patriots and tyrants. It is its natural manure. . .
Posted by Person X at 4:57 PM