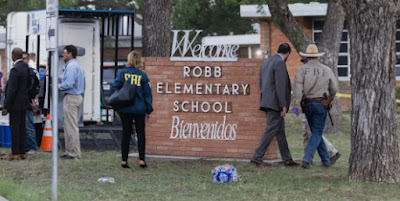 This ain't a complicated issue, people.  Don't be fooled by wicked ideologues (on the right or left) who try to score political touchdowns off the dead bodies of children.

If you stand Salvador Ramos next to a stack of 100 machine guns, and he is content with his life, he won't pick one up and shoot up an elementary school.

We are herded from birth into anti-life world.  If we have faith in Christ, we call it an anti-Christ world.

It's a purely material existence that can have no lasting value for a biological creature. . .

Most people deal with the shabby quality of their life by seeking escape in alcohol, narcotics, sex, domestic violence, gambling or any of the other Western *recreations.*

The issue of community violence can be solved by:

Improving the quality of Western life by cutting out its materialistic core.

Neither will be done.  Right wingers are too indoctrinated into the faith of the 2nd Amendment to give up their ridiculously unnecessary guns (what the fuck does a 21st century human being need a gun for?), and both right and left wingers worship mammon.

Life is cheap, anyway.  Look how undervalued it is in Ukraine, where it counts less than a cloth flag.

Don't act like Uvalde is a tragedy if you accept as a necessity abortion or war.

You can't choose either a little life or a little death.

Lastly, Salvador Ramos had no *mental health* issues.  The quality of life in the Western world is awful.  To sit and stare at a smartphone all day and eat Chipotle for dinner is a more a sign of poor mental health than shooting a school.  Shooting a school is the act of a soul on its last nerve in an insane world.