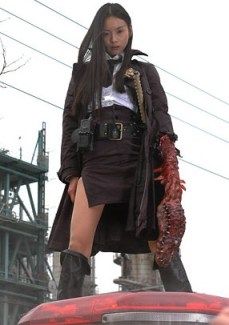 Tokyo Gore Police: To say this thing is *over-the-top* would be an understatement of an immeasurable magnitude. In one scene, an unfortunate Japanese policeman, looking for a little action on the side, gets his penis bitten off by a mutant whore. With his penis stump spurting blood, he machine guns the whore until she is severed at the midsection. Crocodile jaws then sprout from the whore’s wound, and she proceeds to use her new *snapper* on the cop. Imagine a film of nearly two hours of such non-stop *action,* and you begin to get an idea of the atrocity that is Tokyo Gore Police.

I don’t know what you call this kind of movie. And it’s not even really a movie. For the first 2/3s of this thing, it’s just of a compilation of highly stylized gore money shots barely held together by a thin plot and interrupted by bizarre fake commercials and public service announcements dealing with issues from a clearly troubled future Tokyo (the old Tokyo may have been buried under volcanic ash—or it may not. . .it was never quite clear to me what the repeated references to volcanic activity were supposed to mean).

This thing is chock-full of arterial gushers from exploding heads, decapitations, severed limbs and sexual organs, autopsies and self-mutilations. I doubt there has ever been a movie which sprayed more blood at its audience. Heads are sliced in half, and blood gushes out like water from a hydrant on a hot summer day in an American slum.

The last 1/3 of the movie, the *serious* part, attempts to explain what the first 2/3s was all about, and can be summarized thusly:

Tokyo is in the middle of an *engineer* crime wave. *Engineers* are criminals who have been turned into homicidal mutants by an evil scientist. When *engineers* are shot, chopped or bludgeoned, as frequently happens, their wounds morph into freakish weapons (like flesh-encased chainsaws, or bazooka penises or breasts that spray flesh-melting acid! Woo hoo!!). *Engineers* can only be killed by destroying the mutation-producing key-shaped tumors in their bodies. The privatized Tokyo police’s star *engineer* hunter is samurai sword-wielding Ruka (played by the JHottie from Audition), an angel-faced knockout who flashes her amazing thighs in police-issue mini-skirts and undercover short-shorts. While battling *engineers,* Ruka tries to the find the criminal mastermind responsible for the bizarre phenomenon, and also to learn the identity of the assassin who executed her policeman father.

I suppose the film makes *sense* (if one can say a movie like this could make *sense*) to the Japanese. . .they would understand the filmmakers point of view on the cultural issues which the film either mocks, satirizes, exploits or comments on.

For example, one of the fake commercials which interrupts the manic blood-letting advertises a product called *Wrist Cutter G*. . .it’s a cutter with a cute design! a trio of JPop-looking schoolgirls cheerily sing as they cut their wrists and lick their wounds. Is wrist-cutting a symptom of psychological problems among the Japanese? Or are cutters just bored girls indulging in a *modern primitive* fad? What’s the point behind the *Wrist Cutter G* commercial? Who knows? Who cares? Not me. I just sat back and gaped, like a rube at a circus freak show from an infinitely milder bygone age.

Is there any redeeming social value to this gore porn? If there is, it is beyond me. As I was watching the fetish strip club/whorehouse scene, which featured a disturbing line-up of mutant stripper/whores (including *snail girl*) engaging in various perversities (*chair girl* gives the patrons a mass golden shower) from a 21st century Psychopathia Sexualis, I wondered what our Lord Jesus Christ would make of this obscenity? How great is that darkness! That this kind of depravity is *entertainment!* Is there any defense for watching it? Yes, much of the movie is goofy, campy and comic, but that makes the depravity even more depraved, because we are tempted to judge it as harmless. And to see the images of transmorgified human flesh, to see the human body, which is made after the likeness of God, to see it corrupted, to see creation mocked so basely, to watch this and not vomit, validates the fall. I beheld Satan as lightning fall from heaven. Mankind is in the midst of a similar fall. We are so damaged, so unclean, the filth of our culture seems *natural* to us (or, to many of us. . .I am sure there are still a few who will turn from Tokyo Gore Police in disgust after a minute or two), I am reminded of the following from the prophet Isaiah, who felt beyond redemption in the presence of the Lord:

Woe is me! for I am undone; because I am a man of unclean lips, and I dwell in the midst of a people of unclean lips: for mine eyes have seen the King, the LORD of hosts. Then flew one of the seraphims unto me, having a live coal in his hand, which he had taken with the tongs from off the altar: And he laid it upon my mouth, and said, Lo, this hath touched thy lips; and thine iniquity is taken away, and thy sin purged.

After watching Toyko Gore Police, no, after ENJOYING Tokyo Gore Police, I felt I needed one of the Heavenly host to purge me with a live coal. . .