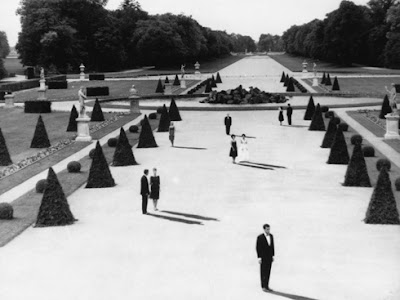 Last Year At Marienbad: I first saw this, unbelievably, on television. . .maybe 25 years ago, on WGPR channel 62 in Detroit. This was way back before 62 was a CBS affiliate. This was back when 62 was the first black-owned station in America, back when 62 was an amateurish independent operation, with a miniscule audience, weak signal, primitive production standards and terrible programming. . .terrible programming except for their late night movie. There was a period back in the day, for maybe a year or two years, when 62 would show European movies in the middle of the night. They must have found a package of Euro flicks in some bargain bin at a distributor’s fire sale. They had maybe 30 foreign movies they would run over and over again. . .awful, grainy prints with faint subtitles. And I doubt anyone at 62 ever screened any of these movies, because they were shown uncut, nudes scenes and all. There must have been only a handful of other night owls beside me watching, as there was never any public outcry from *family groups* about 62 showing skin.

Watching the creepy, trippy, gothic Last Year At Marienbad became a genuinely surreal experience as it was interrupted every ten minutes for Mel Farr *the Superstar* Ford and Henry the Hatter ads. The juxtaposition of the height of European culture and the tacky depth of American commercialism was mind-boggling. . .

Well, Marienbad has just been released on dvd, and I finally got to see it uninterrupted. . .

It is even better than I remembered. I had forgotten how cleverly and with meticulous detail and stunning design the filmmakers explored the illusions of reality & memory, and the mysteries of experience. David Lynch, of whom I am a fan and who also dabbles in these themes, could learn a lesson on the value of self-discipline from Marienbad’s director, Alain Resnais, and screenwriter, Alain Robbe-Grillet. Resnais and Robbe-Grillet were able to present ideas as esoteric as Lynch’s, but without Lynch’s rambling excess. Marienbad is a masterpiece of control. The story is as ambiguous as any of Lynch’s, but it never becomes self-indulgent.

With Lynch, I have the feeling the fellow is not telling everything he knows [it doesn’t matter whether this is because he isn’t telling everything, or because the story is imperfectly told], but Resnais and Robbe-Grillet tell the viewer everything. . .they tell us every possible thing, so that Marienbad is the most user-friendly *art* film ever made.

Marienbad is constructed around a familiar plot: the love triangle, here between the characters X, A and M. 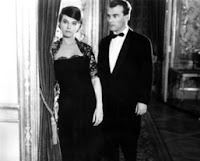 X meets A at a grand chateau resort, and pesters her to the point of stalking as he harangues her with his memories of their affair from the previous year (perhaps at Marienbad) and her promise that she would meet him exactly one year later at their present location, whereupon she would leave M, her husband, and run off with X. But X has one small problem: A claims to have no memory of ever meeting X.

The ingenious Robbe-Grillet script unfolds, then refolds, then unfolds again as X repeats over and over and over again the details of the alleged affair in a sometimes pathetic, sometimes pleading, sometimes cool and suave, sometimes whining and desperate attempt to convince A of its reality. The repetitions, however, gradually incorporate variations, at first trivial, then becoming increasingly unsettling. By the end, the viewer is over-loaded with interpretations, all equally valid:

X made the whole story up. X and A did have an affair, but A chooses to deny it in order to remain with her husband M. X stalked and raped A, and A is suffering from a traumatic disorder. X stalks and rapes A, and invents the affair from last year as part of an alibi. X and A had an affair which M discovered, and then M killed A, and now a year later X is just wandering around the insanely ornate chateau in his own fantasy world. Etc. Etc. Etc. The interpretations are limitless.

The contemporary movie-goer, raised on a diet of mindless *action* films and juvenile sex *comedies,* would likely ask of Marienbad, 'what is the point?' And that would be the point, exactly. Resnais and Robbe-Grillet require the viewer to use his/her brain, to think, to participate, instead of sitting back and becoming desensitized to bludgeoning violence, or revertng to infantilism from adolescent humor.

Marienbad received a mixed response upon its release nearly fifty years ago—were it to be released today into our Cineplex Temples of Sensory Assault, the response would be unanimous: the slugs in the theaters would greet it as the Sex Pistols were greeted in the deep south on their US tour, with angry howls and beverage showers.

Giorgio Albertazzi plays X, and he seems the most *normal* of the characters. He drives the plot with his narration of the alleged affair. He seems like a fellow trapped in a recurring dream, trying to reason with phantasms from his subconscious. . .

Delphine Seyrig plays A. . .no, really, she poses as A. With her defensive body language and corpse-like make-up, she seems like the personification of Post Traumatic Stress Disorder. . .

The weird, almost ghoulish-looking Sacha Pitoëff plays the sinister M, who has a seeming supernatural ability at a misère nim game which figures prominently in the movie. Marienbad is replete with symbolic triangles, and perhaps most revelatory are the game scenes, in which 16 cards are laid out in a triangle shape. . .

I had thought Marienbad might seem dated, but, no, it is a timeless masterpiece. In its geometric staging, unnatural lighting effects, and the highly mannered cast performances, Marienbad has the appearance of an artificial world inhabited by creatures struggling with their illusions of determinism. In the end, one may view Marienbad as an exaggerated picture of our own attempt to understand human experience.
Posted by Person X at 8:58 AM