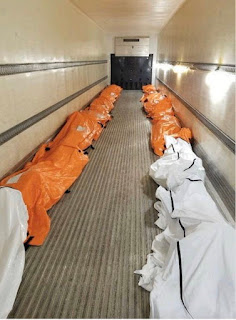 The corpses are just starting to make a tidy pile here in America, nothing yet like what we see in Italy or Spain, so there are those who still insist this virus pandemic is a *hoax,* just a Media and/or Government tool to destroy the country's economy and further psychologically cripple the citizenry to the point they loosen their last grip on what remains of their liberty (though I wish one of these pandemic deniers would tell me just what liberty the average Joe has).  I suppose there will never be enough deaths for them to admit they were wrong.  40000, 50000, 75000 corpses, the stack will never reach high enough to equal the imaginary losses in economy and liberty in the eyes of the pandemic deniers. . .

Their insistence that the fake economy and fake liberty are so precious, and so threatening to the Media and Government puppets of the 1%, that no amount of life can measure against it, is infuriating, and thus I wish they would get the virus and slowly gasp their last breaths.

I am also infuriated by Donald Trump's irrational handling of this crisis, to the point I wish a fatal dose of the virus upon him, as well. . .

And among the 325 million Americans, I am confident there are many who wish the same. . .and have their own personal coronavirus death wish list.

In the mind, I can picture the bloated near-carcass of Trump in a hospital bed, choking to death on his own phlegm, and it is not an unhappy thought. . .

King David, a man described as being after God's own heart, prayed to the Almighty for even worse to happen to his enemies. . .don't believe me?  Read the Psalms, they are littered with death wishes such as this:

Let his days be few; and let another take his office. Let his children be fatherless, and his wife a widow. Let his children be continually vagabonds, and beg: let them seek their bread also out of their desolate places. Let the extortioner catch all that he hath; and let the strangers spoil his labour. Let there be none to extend mercy unto him: neither let there be any to favour his fatherless children. Let his posterity be cut off; and in the generation following let their name be blotted out. Let the iniquity of his fathers be remembered with the Lord; and let not the sin of his mother be blotted out. Let them be before the Lord continually, that he may cut off the memory of them from the earth. Because that he remembered not to shew mercy, but persecuted the poor and needy man, that he might even slay the broken in heart. As he loved cursing, so let it come unto him: as he delighted not in blessing, so let it be far from him. As he clothed himself with cursing like as with his garment, so let it come into his bowels like water, and like oil into his bones. Let it be unto him as the garment which covereth him, and for a girdle wherewith he is girded continually. Let this be the reward of mine adversaries from the Lord, and of them that speak evil against my soul.

It's just human nature. . .and that's as far as I can speak for King David.

As for me, in my mind I am sickened by those who value money and flag above life, and by Trump's stupidity and delusions of grandeur.  And yet I believe if I were actually in a hospital room with Trump, saw him with an air tube in his throat, and a rectal tube and catheter, sweating, choking, stinking of death, I'd probably pat his fat head and give him a sip of water from a straw in a styrofoam cup, and tell him it was gonna be all right, hang in there, old boy.  And that's human nature, too: