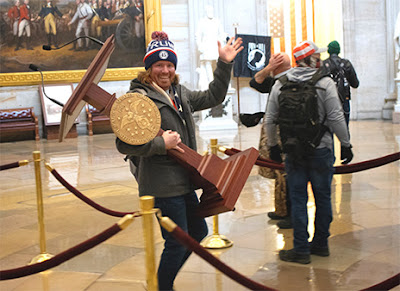 Don’t you just love the smile on this guy’s face?  I mean, it’s clear he’s having the time of his life.  Turns out he’s a woodworker from Florida, married to a doctor.  There might be some domestic woes ahead of him, and perhaps some legal troubles/jail time, but. . .I just get the feeling he wouldn’t trade the memory of the moment pictured above for anything.  I mean, don’t most people live gray lives, doing what they are told so they can. . .what? Live in a house with a spouse who won’t yell at them, and maybe have the privilege to work a meaningless job?  If he goes to jail, will he have lost more than he gained in the one shining moment pictured above?  I don’t know, I don’t know.

Anyway, yesterday’s *American Spring* was a comical mix of MAGA hillbillies and keystone cops, neither side knowing what to do when they found themselves thrown together in the Capitol.  Make no mistake, this was no *insurrection,* it was a tour bus of rednecks delighted to find easy access to the Capitol, and they promptly took selfies (and souvenirs) to document their own wonder.  One hillbilly from Arkansas wandered into Nancy Pelosi’s office and seemed as awestruck as if he had just encountered indoor plumbing for the first time.

Joe Biden in a stern tone scaremongering about insurrection and sedition?  Please!  This was American tomfoolery, plain and simple, no better and certainly less worse than the mischief of our 2020 BLM summer.

The only bummer to the day’s event was once again the result of America’s trigger happy police.  A luckless white woman the victim this time.  Ashli Babbitt.  While others were able to frolick in a Don’t Tread On Me LARP, this poor woman was shot to death by another representative of our cowardly police. Babbitt was a True Trump Believer, mind-controlled by Q nonsense, and fell so deep into the MAGA rabbit hole she lost all contact with reality.  In a bitter, bitter irony, in her last pro-MAGA tweet she claimed: nothing can stop us. . they can try and try but the storm is here and it is descending upon DC in less than 24 hours. . .dark to light.  Of course, she was the one person fate singled out to stop.  Life is strange, very strange.

And as if to add insult to death, her god Trump betrayed her less than 24 hours after egging her into the Capitol and proclaiming he would never quit fighting, never concede.  Today, fearful of being arrested on inciting-a-riot charges, he meekly promised to vacate the White House on January 20, and, like a squishy New Ager, called for *healing and reconciliation.* Never have so many MAGA hillbillies been so badly served, but especially so the poor Ashli Babbitt, who is eternally past the point of healing.