A terrible slate of games in Week 2 of college ball.  Mercer is playing Alabama, for crying out loud.  How is that even allowed?  All this shit about re-alignment, expansion, super conferences, you got to do something so that real games are played every week.  8-6-1 vs spread last week.

Oregon +14 @ Ohio State: Oregon got out-gained by Fresno State, and struggled hard to win.  They're gonna all of a sudden have a defense to stop the Buckeyes?  No.  They are gonna get BLOWN OUT.  Ohio State.

Toledo +17 @ Notre Dame: The Irish have a new DC, and the results were piss-fucking-poor in Week 1 against the SemenHoles.  Toledo's probably a better team than FSU.  Toledo.

Ball State +22.5 @ Penn State: The Shittany Lions have a roster full of 4 & 5 star recruits, but year-after-year they play sod-buster football. They should mop the floor with Ball State, but will struggle and won't put them away until late in the game. Ball State.

Buffalo +13.5 @ Nebrasska: A B1G team at home not even a two touchdown favorite over a MAC team? This is the fourth year of Scott Frost, you think the slappies in Lincoln figured they'd ever be fretting if their Golden Boy could handle a MAC team? I wouldn't be the least bit surprised if Buffalo wins, outright. Buffalo.

Iowa +4.5 @ Iowa State: Iowa State is only a Top 10 team because they play in a shit-ass conference.  It's absurd that Iowa is getting points.  Iowa will kick their ass, and then the Cyclones will win a bunch of games against candy-ass teams and Media will fawn all over snaggle-toothed Matt Campbell because they only lose by 10 to shit-ass Oklahoma in the Sissy Conference Title Game.  It's such a limp-wristed conference, Oklahoma and Texas can't wait to get out of it.  Iowa.

Eastern Michigan +25.5 @ Wisconsin: I don't even know if Wisconsin can score 26 points.  Graham Mertz was a Big Time QB recruit, but he has played like a bum, he single-handedly lost the PSU game for the Badgers.  Eastern hangs tough against B1G teams on the road, and even managed to knock off a couple of the lightweights, Purdue and Illinois, in recent years.  They should be able to lose by only 21 or so.  Eastern Michigan.

Idaho @ Indiana: No line as of Tuesday.  If they set one, take Idaho, whatever it is.  Indiana football is BACK.  Back to being lousy.  They won a few games in the covid season and the Media made Tom Allen into Vince Lombardi, but last week showed he's still Tom Allen, a gOOfball high school coach who lucked into a B1G job.

Washington +6 @ Michigan: Washington lost at home to Montana, and now they go on the road and are only a 6 point underdog, that tells you all you need to know about Jim Harbaugh's tattered reputation. Michigan. 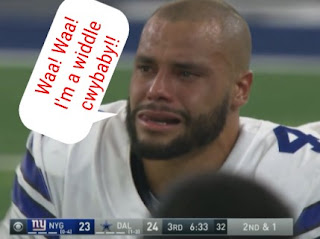 Dallas +7.5 @ Tampa Bay: I got a feeling Dak Prescott will be crying and in street clothes by half-time.  Tampa Bay.

Philadelphia +3.5 @ Atlanta: Arthur *Silver Spoon* Smith, the FedEx heiress, gets as EZ an opener as possible, going against Jalen Hurts and a Jim Schwartz-less Eagle defense.  If he can't win this game, it means the players have already tuned out Little Lord Fauntleroy.  Atlanta.

Minnesota -3 @ Cincinnati: This could be the wildest game of the day, I expect both teams to score a lot of points this season (for the Vikings, until Kirk Cousins gets covid).  They are already worried about Ja'Marr Chase being a flop in Cincy.  That means he'll probably rack up 150 yds and 2 tds in this one.  Minnesota.

San Francisco -7.5 @ Detroit: I expect the 49ers to win, but will not cover because genius Kyle Shanahan's dumb two QB system will consistently interrupt the 49ers offensive momentum, and a Trey Lance turnover will help keep the Lions close all the way to the end.  Detroit.

Los Angeles Chargers -1 @ Washington: I expect to see a significant decline in Justin Herbert this year, look for him to turn the ball over a lot more without Anthony Lynn to chaperone him.  This game won't be close.  To me, it's a joke the Chargers are favored. Washington.

Jacksonville -3 @ Houston: Can you imagine if Trevor Lawrence and Urban Meyer lose to Nimrod Taylor and. . .what's his name?. . .Dana Scully? LOL!  Houston.

Cleveland +6 @ Kansas City: The Browns are the better team, plain and simple.  Cleveland.

Chicago +7.5 @ Los Angeles Rams: The debut of genius Sean McVay and his new girlfriend QB Kelly Stafford.  Can't wait to see the look on McVay's stupid face the moment Kelly tosses a dumbass pick 6.  It will happen.  Stafford is still Stafford.  That said, I doubt the Bears will win, because they have a thin line-up on offense, and their defense is aging, but Kelly will manage to keep the Rams from covering.  Chicago.

Baltimore -5 @ Las Vegas: It's time for Jon Gruden to shit or get off the pot.  He hired Gus Bradley and Rod Moronelli to fix the defense, all they gotta do is stop the run in Week 1.  If they get run over by the Ravens, the season is already lost, because it means the defense is still feeble.  I like Derek Carr (Carr is a true version of the Media version of Kelly Stafford) and the Raider offense.  Let's hope they aren't wasted another season by poor coaching and tissue paper defense.  Las Vegas.