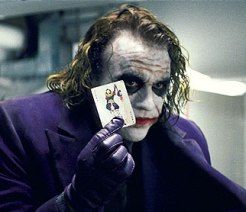 The Dark Knight: I finally watched this thing on dvd a couple nights ago. . .

This is more Fisher-Price Light & Sound Show than movie. It’s something you hang over a crib to distract a baby.

Well, that is what movie audiences have become: babies crying for distraction. Art is now beyond the masses. They do not have the patience or the education. Shine a light in their eyes, say *boom!* and they squeal with delight!

This isn’t a terrible movie. It’s mediocre. If the critics who raved about this and the boobs who scored this #6 on IMDb had been able to recognize its mediocrity, there would be no need for me to bother with this review. I would have watched it, yawned, and then continued waiting for Dexter Season 4. But for this to be regarded as some kind of landmark cinematic achievement—no, I cannot let that pass.

A decent story. . .simple. . .not particularly thought-provoking. . .but enough to keep your interest. Enough, if it hadn’t been buried beneath the rubble of all the explosions and car crashes and other ridiculous *action.*

This is a two-and-a-half hour movie. . .you would think there would be plenty of time to show adequate character development. . .to detail the complexity in the *love triangle* and to show the pathology of Dent’s psychic breakdown. But the *love triangle* is painted in the broadest strokes possible, and Dent’s breakdown occurs almost instantaneously. But in this two-and-a-half hour movie, there is no time for character development. . .because the filmmakers have to give the dumbed-down audience the ninety minutes of crashes and explosions they have become addicted to. So the story is told in short-hand.

As I said, it’s not terrible. It’s mediocre. It could have been better. . .but this is the cinema Americans are willing to settle for.

Heath Ledger? Yes, he is good as the Joker. . .when he acts. . .which is maybe fifteen minutes out of this two-and-a-half hour *wham bam thank you cgi* mess. . .the rest of the time Ledger is a just a prop riding on the various trucks, buses, planes, trains and automobiles that go crash bang.

Yes, Ledger does a fine job as the Joker. But is it the stuff of the legend that has already been made? Sorry, no. What does Ledger do that any of twenty other actors couldn’t have done just as well? The performance is mainly make-up and a continual series of lip-lickings and tongue protrusions—Ledger’s Joker has Kluver-Bucy Syndrome. Ledger is good, no doubt about it. . .but his performance, like the movie itself, benefits from the hype of over-blown praise.

And who the hell is this plain-Jane actress who plays Rachel Dawes? Batman and Dent can’t live without this washerwoman? She’s such a mule, it’s hard to believe Harvey Dent goes schizo when she is killed.

In movies like this, the female lead is also supposed to be a *special effect*. . .who let this poor homely thing wander onto the set? Was there one big action sequence too many, leaving no money in the budget to hire some A-list eye candy, such as Jennifer Connelly? Instead, we get the mediocre mug who plays Rachel Dawes. A mediocre mug for a mediocre movie.
Posted by Person X at 9:24 AM