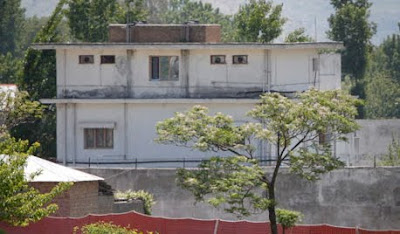 Ha ha ha. . .the picture above is the *$1 million mansion* Bin Laden was living in. $1 million? The place is a dump. Yet another detail from the initial story that turns out to have been a product of the *fog of war.*

Bin Laden was living in luxury in a million dollar mansion, there was a 40 minute *firefight* in which an armed Bin Laden shot at SEALS from behind a female human shield. . .

But now we are to understand Bin Laden was living in a dump, and the SEALS shot an unarmed Bin Laden and at least one unarmed woman. These are the new superheroes of the day, shooting fish in a barrel.

And now in Pakistan, Bin Laden’s daughter tells her version:

US forces captured Bin Laden alive, but shot him dead in front of family members.

I would bet this is closer to the truth than any USA Jessica Lynch/Pat Tillman-style Fairy Tale version of the *testament to the greatness of our country.*

Meanwhile, as a proof to the stunning degree to which *Christian* AmerICKa has placed its faith in violence and taken vengeance to itself, note how dismayed most are to the reaction of the football player Rashard Mendenhall:

Plenty of athletes tweeted their excitement at the news of Osama bin Laden's death. Rashard Mendenhall, however, wasn't convinced a celebration was in order. "What kind of person celebrates death?" the Pittsburgh Steelers running back tweeted. "It's amazing how people can HATE a man they have never even heard speak. We've only heard one side..." "For those of you who said you want to see Bin Laden burn in hell ... I ask how would God feel about your heart?" “I have not spoken with Rashard so it is hard to explain or even comprehend what he meant with his recent Twitter comments,” Steelers owner Art Rooney II said.

Regrettably, Rooney probably speaks for most AmerICKans when he says he cannot comprehend Mendenhall. . .

The head of the CIA admitted yesterday that there was no live video footage of the raid on Osama Bin Laden's compound as further doubts emerged about the US version of events. . .
Posted by Person X at 10:42 AM