Rape Of The Coloreds, Part II 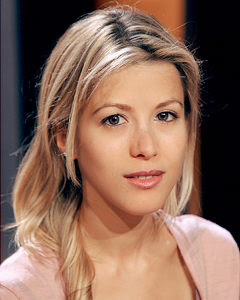 The negress cleaning woman victim is a devout MUSLIM

She earns $23,000-a-year, with which she supports her daughter

The victim and her daughter live in The Bronx

The victim’s brother, upon hearing conspiracy theories his sister was involved in some type of *set-up,* had this to say:

"I don't think that's fair. My sister's a very nice woman and not capable of that."

One of his previous rape victims is the gorgeous white French woman pictured above, who describes the serial molester as:

"a rutting chimpanzee" who "no attractive women want to work for"

Meanwile, the ethnic usurer Strauss-Khan’s lawyer is saying the rutting chimpanzee engaged in *consenual sex* with the cleaning woman

What do we learn from today’s accounts?

The conspiracy theory, which we said yesterday was absurd, and there was zero chance the poor colored cleaning woman was involved in a set-up, is dead-in-the-water. The defense is that this devout MUSLIM cleaning woman willingly had sex at her work place with the old obese ethnic usurer Strauss-Kahn. HA HA HA. This is as ridiculous a claim as the supposed *set-up.*

On the one hand, we have a devout MUSLIM who, to raise her daughter, has tirelessly changed the dirty sheets of the filthy rich for four years at this luxury hotel for twenty-three fucking thousand dollars-a-year (and which is probably the amount the ethnic usurer Strauss-Kahn dropped on his little New York jaunt, a drop in his bucket), but when confronted by a naked old obese ethnic usurer, she drops her duster and immediately engages in *consensual sex* with said bloated old ethnic usurer, AND THEN SUDDENLY, FOR SOME REASON, CLAIMS RAPE!!

Uh, why did she claim rape? Shame? But nobody would have ever known she had fucked the fat old ethnic usurer. . .and surely she would have known she risked even greater shame by bringing the dirty business out into the open, especially with a rape claim. It makes no sense, especially for a MUSLIM, since MUSLIM rape victims are often STIGMATIZED!

I can think of NO rational reason why this devout MUSLIM cleaning woman would engage in *consensual sex* with an old obese ethnic usurer, and then SUDDENLY, FOR SOME REASON, CLAIM RAPE.

On the other hand, we have the old, overweight ethnic usurer Strauss-Kahn, who obsesses over RAPE, who is described by a beautiful white French woman as a *rutting chimpanzee,* but this same ethnic usurer would have us believe a relatively young negress, a devout Muslim with four years of spotless service as a hotel cleaning woman, wanted to have sex with him, but then SUDDENLY, FOR SOME REASON, CLAIMED RAPE.

So, here we have a pig, an obese ethnic usurer who looks very much like a serial molester, caught with his pants down, now claiming he is the VICTIM.

And there’s something VERY WRONG with anybody who believes the rutting chimpanzee ethnic usurer Strauss-Kahn. . .

Now the fat old ethnic usurer Strauss-Kahn has his million dollar lawyer claiming a $23000-a-year devout MUSLIM cleaning woman wanted to fuck him, and then cried rape, FOR SOME REASON. . .

All the resources of the rich allayed against the poor and the colored. . .but the rich man is the VICTIM!! A literal Man of the World SMEARED by a $23000-a-year colored maid!!

Ah, the poor rich! Always being victimized by the poor!

The poor little rutting chimpanzee, persecuted, CRUCIFIED even, by a coal black MUSLIM washer woman!! I tell you a truth:

It's easier for a camel to go through the eye of a needle, than for a coal black MUSLIM washer woman to enter into the Kingdom of God. . .
Posted by Person X at 1:28 PM