Rape Of The Coloreds 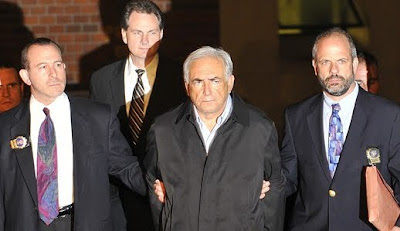 16 May 2011, Wall Street Journal: The arrest of International Monetary Fund chief Dominique Strauss-Kahn on sexual-assault charges threatened to upend French politics and weaken the IMF's central role in resolving Europe's deepening debt crisis. Mr. Strauss-Kahn, 62 years old, was expected to be arraigned Monday morning on charges of attempted rape, criminal sexual assault and unlawful imprisonment of a maid in the New York City hotel where he was staying, police said.

The surprising arrest came amid increasing global attention for the IMF, an organization of 187 nations that advises and lends to troubled economies.

Police said a 32-year-old cleaning woman accused Mr. Strauss-Kahn of sexually assaulting her in the Sofitel Hotel near Times Square. The alleged victim, a native of Guinea and mother of two, said she entered room 2806, a $3,000-a-night luxury suite, around 12 p.m. on Saturday to clean it, thinking it was empty, according to a law-enforcement official with knowledge of the case. According to the narrative she gave investigators, Mr. Strauss-Kahn emerged from the bathroom nude and approached her from behind and touched her breast, then threw her on to the bed, the official said. She told police she broke free but was then pushed into a rear hallway of the suite near the bathroom. Mr. Strauss-Kahn allegedly caught up with her and sexually assaulted her, the official said, before allowing her to leave.

The accuser informed hotel security officials, who showed her a photo of the suite's occupant. After she identified Mr. Strauss-Kahn as her attacker, hotel officials then called police, the official said. The alleged victim was taken to a hospital where she was treated for trauma, tested for sexual assault and later released, the official said. The official said detectives have recovered DNA evidence at the scene. On Sunday, the woman picked the IMF chief out of a lineup at a Manhattan police station.

I have zero sympathy for the ethnic usurer Strauss-Kahn. There can be no question of this man's wickedness. Our New Testament records our Lord's beloved disciple as teaching the following:

Love not the world, neither the things that are in the world. If any man love the world, the love of the Father is not in him.

When the beloved disciple speaks of the world, he is speaking of man's material system, the kingdom of man, the temporal kingdom of man, which is opposed to the eternal Kingdom of God. The world system is anti-Christ, and the same anti-Christ spirit which was operating in Babel and has continued to operate in the world down through the ages finds willing ministers in Satanic figures such as the ethnic usurer Strauss-Kahn.

The ethnic usurer Strauss-Kahn is thoroughly of the world, and there is nothing of the Father in him.

Thou hast taken usury and increase, and thou hast greedily gained of thy neighbours by extortion, and hast forgotten me, saith the Lord GOD. Behold, therefore I have smitten mine hand at thy dishonest gain which thou hast made, and at thy blood which hath been in the midst of thee. . .The people of the land have used oppression, and exercised robbery, and have vexed the poor and needy: yea, they have oppressed the stranger wrongfully.

Now the ethnic usurer Strauss-Kahn has been caught acting out in his private life the same behaviors he practices in his public life as Man of the World:

It is not often the great men of the world are brought low. The wicked prosper, and the poor suffer. But here we see one of the world greats fall like lightning. Doubtless he does not understand the criminal nature of his acts. Look at the ethnic usurer Strauss-Kahn's defiant face in the photograph above. He broke no law in his world.

I have zero sympathy for such a creature as this ethnic usurer Strauss-Kahn. . .he brought misery to millions through the IMF, he raped the nations. . .and in his monstrous megalomania, he raped a poor colored maid, a poor coal black woman trying to put food on her children's table by changing the dirty sheets of the greats of the world. And this ethnic usurer Strauss-Kahn judged himself entitled to ram his cock into the mouth of the poor colored maid. Look at his defiant face! This is the face of anti-Christ, the face of the world, the face of the serpent and of the viper, of whom our Lord asked:

How can ye escape the damnation of Hell?

This article, which details another of the ethnic usurer Strauss-Kahn’s rapes, includes the interesting sidebar:

For some, the story of Strauss-Kahn's fall from presidential hopeful to prison cell was a combination of sordid tale and Shakespearean tragedy. For others the story was so extraordinary it smacked of a set-up. Only three weeks ago, Strauss-Kahn evoked such a possibility in an interview with French newspaper Libération when he said he thought he was under surveillance.

Ha ha ha. . .trapped by his own obsession with rape! The ethnic usurer Strauss-Kahn is fixated on rape to such a degree, he invents alibis in advance. . .

AS IF A COLORED MAID WOULD TRY TO SHAKE DOWN ONE OF THE WORLD GREATS! OH, YES, IT HAPPENS ALL THE FUCKING TIME!! EVERYONE KNOWS MAIDS MAKE MILLIONS WITH FAKE RAPE STORIES!!

Hello, is this the hotel where the great ethnic usurer Strauss-Kahn is staying? It is? OK. Could you tell me which negress will be cleaning his room today? We need to talk to her about staging a fake rape, and we'll also need to talk to her about getting her bank routing number so we can send her the money. Could you connect me to the right negress maid, please? Thank you!

A *honey trap,* indeed! Absolutely zero fucking chance this ethnic usurer Strauss-Kahn is the VICTIM. NO FUCKING CHANCE STRAUSS-KAHN IS THE VICTIM.