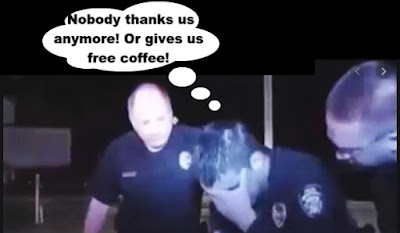 The morning after an unusual number of police officers called out sick, only two sergeants and one officer showed up in one of Atlanta's six police zones, according to police officers who don't want to be named.  Additionally there are reports several officers have quit.  The shortages come in the wake of the Fulton County district attorney bringing charges against two officers who were involved in the deadly shooting of Rayshard Brooks. On Wednesday, multiple sources within the Atlanta Police Department told CNN that officers were not responding to calls in three of the department's six zones.

One can only laugh at the juvenile behavior of the crybaby Atlanta police, both the quitters (who at least had the decency to quit) and especially the pouters who stay on the time clock but refuse to perform their paid duties.

These are the people costume sniffers expect us to perpetually thank and shower with discounts and free passes. . .

These are the people costume sniffers worship as heroes. . .

So it’s heroic to bitch and whine and quit and steal your fucking paycheck when you get criticized? When did that become heroic, and not weak and infantile and shameful?

Police will only po-lice if they are exempt from the laws they supposedly enforce?

God only knows how many crimes these quitters and malingerers have committed. . .how many citizens they assaulted, murdered, framed, raped and stole from.

These damned thugs are lucky they aren’t being tarred-and-feathered. . .

We know already the FOX sheeple will orgasm at any news of increasing crime in Atlanta, for in their simple minds this will prove how wrong the police haters are, and how badly America needs even more Law&Order!®, not understanding Law&Order!® created this latest American mess in the first place.

If, indeed, the Atlanta police department crumbles into non-existence, there will doubtless be months of pain as the city transitions to a community service staff, and no doubt there will be terrible tales of rapes and murders and sad broken-hearted small business owners forced to abandon their dreams due to organized retail crime mobs.

But out of chaos, a New Order shall emerge. Atlanta will be protected and served by peace officers, and the dishonesty, corruption and brutality of the organized police force will become yet another small dark chapter of American history.

So we ask all the Atlanta police officers to do their community, and the country, which can learn from the Atlanta experience, one genuine act of sacrifice: quit. Get out of the way and let the New Atlanta Public Safety Staff take over.

Sadly, after composing this we learned the infantile police of Atlanta were rewarded for their temper tantrum with a $500 bonus and free meals. LOL!  The more things change, the more they remain the same. . .
Posted by Person X at 1:03 AM