Powder Keg USA: The Gospel According To Donald Trump 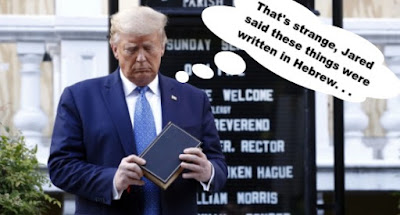 Donald Trump: The President is in full buffoon mode now.  After hiding in fear all weekend in his fortified bunker five stories below the White House, he ordered an extra dose of security from the National Guard and active duty US Military to drive the rabble away from his bedroom window.  While he was giving his *unity* speech in which he claimed he was an ally of peaceful protesters, he had his THUG security force gas the shit out of peaceful protesters to clear out space so he could go to St. John's church and hold up a bible he never reads.  It's amazing to me that tens of millions of people are fooled by this moron.  It's now abundantly clear from the dual crises (virus and unrest) that Trump is perfectly content to be President only of *red* states. . .to be President only of people who say nice things about him.  It's also clear Trump has no patience for dealing with complex issues.  He wants one simple solution to everything, so he can relax and check his ratings.  With the virus, his response was: Oh, it comes from China, OK.  Don't let people from China come here.  That's solved.  Next.  That's how you end up with 100000 corpses, and counting.  With the civil unrest, his reponse: Oh, people are angry? No, they're being provoked by antifa.  They are now officially terrorists.  Put them in jail for a long time.  Tell the governors to do the same.  That's solved.  Now bring me my Big Macs!

So tired of hearing Media's obligatory cop worship.  Yes, this Derek Chauvin guy is a murderer, we'll agree. . .but 99% of cops are good!  Look, we hear this every time a cop commits a crime.  Just remember, last time the cops were in the spotlight, Derek Chauvin was one of the 99% of good cops. . .even though complaint after complaint after complaint had been filed against him.  99% of the cops are NOT good, that's why this problem never goes away.  Cops commit crimes daily, they lie, they steal, they plant evidence, they injure and kill people.  If even 50% of cops were good, we wouldn't have these constant policing issues, because the good cops would police the bad cops.  It's no secret any good cop who does try to police a bad cop is shunned and considered a rat who deserves no back-up.  Sorry, the *99% of cops are good* shibboleth is a LIE.

Media is so stupid. . .antifa. . .outside agitators. . .please!  Listen, these protests are EVERYWHERE. . .from the mega cities like New York to little sod buster towns like Sioux Falls. . .but Media says outside agitators, most often something called *antifa,* comes into these towns to provoke trouble. . .uh. . .the mischief is going on everywhere, so why don't *antifa* just stay in their own town and cause mischief there, why travel?  Media would have us believe *antifa* from city A is going to make mischief in city B, while *antifa* from city B is going to city A to make mischief. . .do they drive past each other on their way to make mischief??  I think Media repeats this falsehood because they have no real interest in advertising the truth: these protests are the result of disaffected Americans expressing their disaffection, it isn't something being provoked from outside. . .it's the internal disaffection of large numbers of Americans, provoked not by *antifa,* but by their disgust for an American Way of Life that has failed them.


Red state Trumpbots hope the blue state mischief makers get the virus, and enough of them die in the swing states to get their messiah reelected.  It would be hilarious if it turned out tear gas killed the virus!
Posted by Person X at 1:34 AM